Representatives and scientists from nearly 200 nations are in the process of carefully vetting a summary for policymakers of the Intergovernmental Panel on Climate Change (IPCC)’s Sixth Assessment Report of how the climate has already changed and what we can anticipate in coming decades. The three-part assessment will be the most vital and comprehensive reference yet for informing international negotiations to curb catastrophic human-caused climate change. Crafting the policymaker summary comes in the lead-up to this November’s COP26 UN Climate Change Conference, as well as the start of the two-year Global Stocktake process. Unlike past reports, this one will detail regional climate change and impacts as well as “tipping points,” which can trigger natural processes to transform into dramatically different and likely irreversible states (for example, the melting of the Greenland ice sheet). 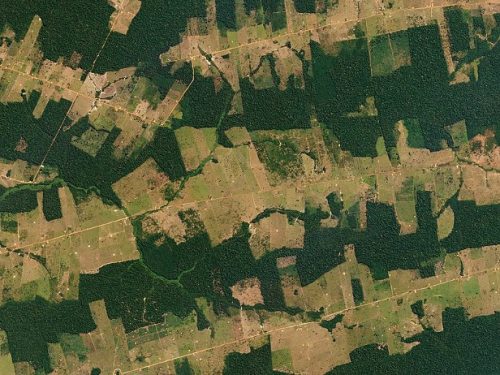 Forest and Fields, Rondônia, Brazil, July 18, 2016; Farms and pastureland carve their way into tropical forestland in the western Brazilian state of Rondônia. The state is one of the Amazon’s most deforested regions. Source: Planet Labs, Inc., CC BY-SA 4.0 <https://creativecommons.org/licenses/by-sa/4.0>, via Wikimedia Commons.

One such critical tipping point is the potential transformation of the world’s largest tropical forests from carbon sinks into net sources of carbon emissions. Currently, carbon emissions that result from deforestation and forest degradation (often referred to as land-use change) are offset, in part, by new reforestation and regrowth. The rest of those emissions are absorbed by intact forests along with additional emissions from fossil fuel combustion, making forests a net carbon sink. Intact tropical forests, in particular, play an outsized role in carbon uptake, to say nothing of their wealth of biodiversity (a single hectare of tropical forest can contain as many plant species as all the native species of western Europe). But how long can tropical forests remain one of Earth’s greatest carbon sinks? How is climate change affecting this capacity?

This tipping point for tropical forests has been challenging for researchers to predict. One reason is that disproportionately few ground observations have been made in tropical forests compared to mid-latitude forests (especially those in the Northern Hemisphere). While recent advances in satellite data and remote sensing have helped compensate for the lack of ground observations, we lack exact estimates of how much carbon is being emitted and absorbed—referred to as carbon fluxes—by tropical forests. The uncertainty often stems from differences in frameworks, definitions, and resolutions used in analyses. The approaches typically yield comparable results, but even small variability in findings has made it challenging to ascertain which forests are carbon sinks, neutral, or sources.

For some time, researchers wondered if climate change would increase tropical forests’ long-term ability to absorb carbon. Higher concentration of atmospheric carbon dioxide can increase tree growth (CO2 fertilization); conversely, more frequent droughts are known to decrease annual tree growth and escalate tree mortality. Climate change is driving both phenomena. And these must be weighted alongside other key variables like rates of natural forest regeneration (as a carbon sink) and extensive forest degradation, fires, fragmentation, and clearing (as carbon sources). This creates the conditions for a carbon flux tug of war between carbon removals (gains) and emissions (losses) (Figure 1).

Figure 1. Net annual GHG flux. For display purposes, maps have been resampled from the 30-m observation scale to a 0.04° geographic grid. Values in the legend reflect the average annual GHG flux from all forest dynamics occurring within a grid cell, including emissions from all observed disturbances and removals from both forest regrowth after disturbance and removals occurring in undisturbed forests. Source: Harris et al., 2021.

Hubau and colleagues released a groundbreaking study in Nature in 2020 analyzing extensive ground observations from 1985 to 2014 across Amazonian and African tropical forests. Investigating environmental drivers of observed carbon fluxes alongside additional explanatory variables using a carbon-gain model, they were able to attribute competing positive and negative drivers of carbon gains.

In both regions, they attribute a 3.7 percent increase in gains to CO2 fertilization—but from there, the results begin to diverge. Gains in African tropical forests were marginally tempered by carbon losses due to droughts (-0.5 percent) and increased temperature (-0.1 percent). In Amazonia, those losses were significantly more pronounced, with droughts accounting for 2.7 percent of carbon losses and increased temperatures causing an additional 1.1 percent loss. Recent droughts in 2005 and 2010 resulted in markedly higher carbon losses through spikes due to tree mortality.

Figure 2: Modeled past and future carbon dynamics of structurally intact old-growth tropical forests in Africa and Amazonia. Predictions of net aboveground live biomass carbon (a, d), for African (left) and Amazonian (right) plot inventory networks, based on CO2-change, MAT, MAT-change, drought (MCWD), plot wood density, and plot CRT, using observations in Africa until 31 December 2014 and Amazonia until mid-2011, and extrapolations of prior trends to 31 December 2039. Model predictions are in blue (Africa) and brown (Amazon), with solid lines spanning the window when ≥75 percent of plots were monitored to show model consistency with the observed trends, and shading showing upper and lower confidence intervals accounting for uncertainties in the model (both fixed and random effects) and uncertainties in the predictor variables. Light-gray lines and gray shading are the mean and 95 percent confidence interval of the observations from the African and Amazonian plot networks. Source: Hubau et al., 2020.

But why in the Amazon and not in Africa? Hubau and colleagues point to differing conditions—for instance, African tropical forests are on average 1.1°C cooler and grow at higher elevations than their Amazonian counterparts. They also point to findings from their carbon gain-and-loss model showing that Amazonian trees retain previously absorbed carbon for shorter intervals (average of 56 years) than African trees (average of 69 years). We can therefore expect to see greater carbon losses from African forests about 10-15 years after the Amazon, with a projected 14 percent decline in aboveground biomass carbon sink by 2030 (as compared to the 2010-2015 mean) (Figure 2a). Even more sobering, the researchers project the Amazon sink will continue to decline all the way to zero by 2035 and thereafter serve as a net source of carbon (Figure 2d).

Gatti and colleagues published a 2021 research article reinforcing that the Amazon forest is dwindling in its role as a carbon sink. The eastern (and particularly southeastern) regions of the Amazon have seen a marked increase in deforestation, warming, drought, and fires over the last 40 years. These drivers are self-perpetuating—creating even drier conditions and further exacerbating tree mortality, diminished photosynthesis, and higher carbon emissions. Saatchi and colleagues similarly call attention to the diminishing sequestration capacity of the Amazon and underscore the role of land-use stressors like deforestation in the transition, with climate change as a secondary driver. They, like Hubau, also point to possible forest dynamics at play, wherein the Amazon’s tree species are less drought tolerant than Africa’s, hampering resilience to land-use and climate stressors working in concert.

Hubau’s findings sent a strong signal that the world’s largest tropical forests have already reached or are nearing their “saturation points,” at which they can no longer absorb more carbon than they produce. In fact, the study suggests tropical forests’ peak sequestration capacity occurred in the 1990s, and has decreased by about 50 percent from the 1990s to 2000s. Between 1990 and 1999, intact tropical forests were responsible for about 50 percent of all of Earth’s terrestrial sink (17 percent of total global anthropogenic CO2 emissions). But in the last decade, that has dropped to only 20 percent (or 6 percent of total emissions).

A publication by Koch and colleagues builds upon Hubau’s research, showing that the saturation and decline in carbon uptake has not been captured by Earth System Models (both CMIP5 and CMIP6). Even in the most pessimistic of scenarios, tropical forests are represented in model carbon dynamics as a modest net carbon sink for the next several decades.

So what can be done? Authors such as Harris and Xu reinforce the importance of curbing deforestation, which has risen precipitously in the last decade (Figure 3 a, d). This is especially important in carbon-rich tropical forests in the Amazon, Africa, and Southeast Asia, which are prone to larger carbon fluxes. Xu also notes the impact of prioritizing secondary forest restoration in tropical ecosystems.

Governments are encouraged to use new frameworks to track and analyze data relevant to their forest-based mitigation targets. Harris underscores the opportunity to implement an internationally consistent forest monitoring network, which could also benefit non-governmental organizations and companies looking to reduce their supply-chain emissions. Xu and colleagues reinforce this recommendation for the Global Stocktake, urging decision-makers to take advantage of inventory frameworks that can provide data on subnational and regional scales. 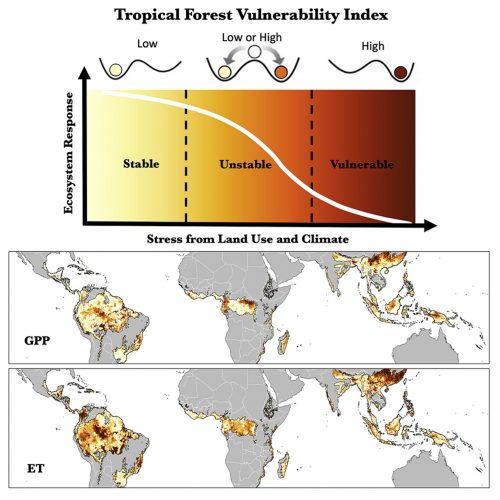 Decision-makers participating in COP26 and the Global Stocktake can also now use a newly released tropical forest vulnerability index produced by Saatchi and colleagues. This first-of-its-kind index can highlight especially vulnerable subregions within the world’s tropical forests, based on a variety of ecologically important response variables (Figure 4). It can be used to signal early warnings for areas in danger of transitioning into new and irreversible states. The vulnerability index will continually improve with longer satellite data records and anticipated advances in satellite observations. Notably, it does not yet capture socioecological vulnerabilities from declining ecosystem functions and livelihoods.

As decision-makers consider options for natural climate solutions through sequestration in tropical forests, Koch and colleagues recommend considering the impact of decisions within the Earth system as a whole. The team performed an idealized experiment in a fully coupled emissions-driven Earth system model in which all land-use conversion was ceased in global tropical forests, allowing for restoration. While they observed significantly increased carbon sequestration in tropical aboveground biomass (and myriad biodiversity benefits), that sequestration didn’t translate into a notable reduction of global surface air temperatures by 2100 compared to the control scenario. The authors attribute this to the fact that in a control scenario, there is greater sequestration by oceans and biomass in temperate and boreal regions.

They emphasize that these findings do not negate the importance of halting deforestation in tropical forests. Rather, they encourage decision-makers to recognize that sequestration does not serve as an alternative to reducing fossil fuel emissions. Widespread restoration also plays an invaluable role in reducing peak atmospheric CO2 and temperatures in the next few decades, during which time additional negative emissions technologies can be scaled up. It also reduces the carbon uptake required by the ocean (and associated impacts on marine systems). Furthermore, halting deforestation and degradation of tropical forests will be critical for species migration and survival over the coming centuries.

Multiple researchers drive home the importance of co-developing solutions within local contexts and with stakeholder input. Without question, preserving and restoring the world’s most carbon-rich, biodiverse forests is a top priority for curbing the worst impacts of climate change. With unprecedented access to data through expanding on-the-ground research networks and advanced satellite data, decision-makers are better equipped than ever to know the role tropical forests can play in natural climate solutions and associated tipping points.

Enter your email address to have updates from Energy Innovation delivered to your inbox.
« How Climate-Induced Risks Affect Power System Planning In The U.S. Southeast United States EPS Update 3.3 »
We use cookies to provide social media features, analyze our traffic, assist you with contacting us, and help improve your user experience on our website. By clicking “OK” you consent to the use of these types of cookies. However, some system cookies that are needed for this website to work properly have already been set. Learn more in our Privacy Policy.