Energy Innovation’s mission is accelerating clean energy by supporting the policies that most effectively reduce greenhouse gas emissions. Through customized research and analysis for decision makers, we uncover the strategies that produce the largest results. We work closely with other experts, NGOs, the media, and the private sector to ensure that our work complements theirs.

Climate change poses grave threats, but many people underestimate the impacts and do not realize how little time we have to act. Two of our reports, The Extremes Become the Norm and The Costs of Delay, make these points unnervingly clear. Scientists argue that adding more than a trillion tons of carbon to the atmosphere—total, over all time—could trigger runaway climate change. Natural cycles can kick in as dangerous feedback loops that spin out of control, threatening both the human prospect and the environment.

This trillion-ton “carbon budget” is already half-spent. Under business as usual, the planet is on track to spend the other half by 2050. To make matters worse, each year of delay in reversing emissions growth makes it harder for us to land at a reasonable climate future—ever.

The good news is that it is still possible to turn around this emissions trend, and keep climate change to a manageable level. Our article, A Trillion Tons, walks through the inventory of solutions. Dramatic innovations in technology and policy make this possible.  The cost of solar has dropped 80 percent in the last five years, and the price of wind power has dropped by about half. Many energy-using devices, like lighting, have done just as well.

These advances have helped install tens of gigawatts of renewable energy capacity around the world. More than a quarter of Germany’s power comes from renewables, and the country has a goal to have renewables meet nearly all of its power needs by 2030. Twenty-nine U.S. states have implemented policies that require a share of their power portfolio comes from renewable sources; California will hit its target of 33 percent in just a few years. At the national level, President Obama set a target to reduce total U.S. emissions 26-28 percent below 2005 levels by 2025 and the U.S. Environmental Protection Agency announced policies that will reduce power plant emissions 30 percent below 2005 levels by 2030. 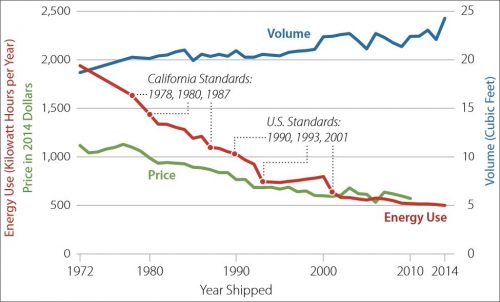 Smart policy can accelerate these trends. In fact, policy is the only method to drastically reduce carbon emissions. Refrigerators, for example, now use 80 percent less energy than they did two decades ago thanks to well-designed performance standards. In California, new buildings consume 80 percent less energy than those built before the state adopted advanced codes.

Many well-intentioned energy policies are poorly designed, fail to capture expected benefits, or waste money along inefficient routes to reach their objectives. To avoid the mistakes of the past, we assess policies to determine not only whether they reach their environmental goals, but also how to design laws and standards to accelerate innovation and lock in progress. Policies That Work highlights ten of the world’s most important energy policies, and outlines the top criteria to successfully design and execute them in any context. If the world’s largest economies adopt these policies and enforce them the right way, we can win the battle against dangerous climate change.

A clean, low-energy future is within our reach: It will cost roughly the same as a system based on dirty and outdated technologies.

With smart policies driving new technologies, we can avoid the worst effects of climate change. But we need to accelerate this transformation. That is Energy Innovation’s mission.

The Costs of Delay