This week, Energy Innovation updated the United States Energy Policy Simulator (EPS), our open-source, peer-reviewed, and nonpartisan model that estimates the environmental, economic, and health impacts of hundreds of climate and energy policies.

Version 3.3 of the EPS builds on the previously released version 3.2.1 by adding demographic breakdowns of premature mortality, improving the user interface, and adding policies to address domestic manufacturing and nitrous oxide (N2O) emissions, among other improvements. The demographic breakdown of public health impacts adds a new element to the EPS model by allowing users to screen the equity impacts of individual policies to better support decision-making that advances equity.

The EPS 3.3 update includes the U.S. NDC policy scenario, which is aligned with the U.S. Nationally Determined Contribution (NDC) under the Paris Climate Agreement to cut greenhouse gas emissions 50-52 percent relative to 2005 levels by 2030. The NDC scenario shows how one group of policies can enable the U.S. to meet this target while creating jobs, growing the economy, and reducing premature death. The NDC scenario has also been updated to include additional incentive policies for electric vehicles (EVs) and building efficiency.

This new data provides insights into how climate and energy policies can address premature mortality in communities currently experiencing the most harm from air pollution. In the U.S. NDC Pathway scenario, the greatest percentage reductions in premature mortality are in communities of color. The EPS model uses data from EPA’s COBRA and the U.S. Census to estimate the percentage reduction in premature death by pollutant and sector for each demographic group by aggregating county-level results from multiple COBRA model runs.[1] 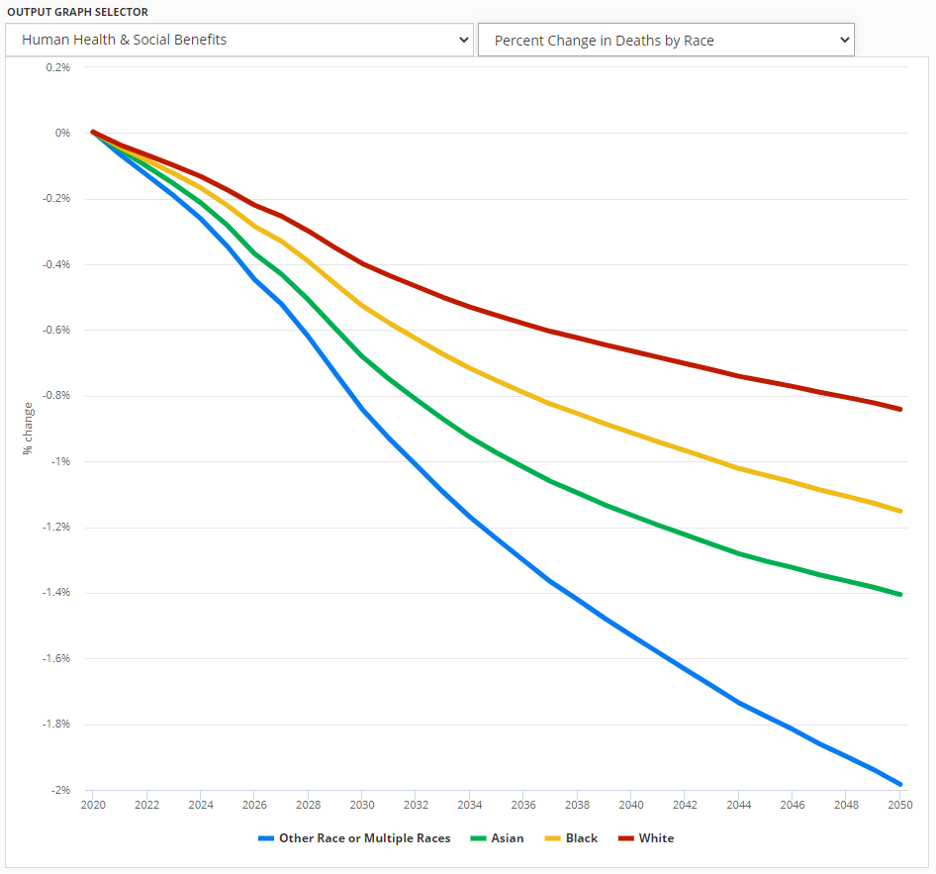 Percent Change in Death by Race in the NDC Pathway Scenario 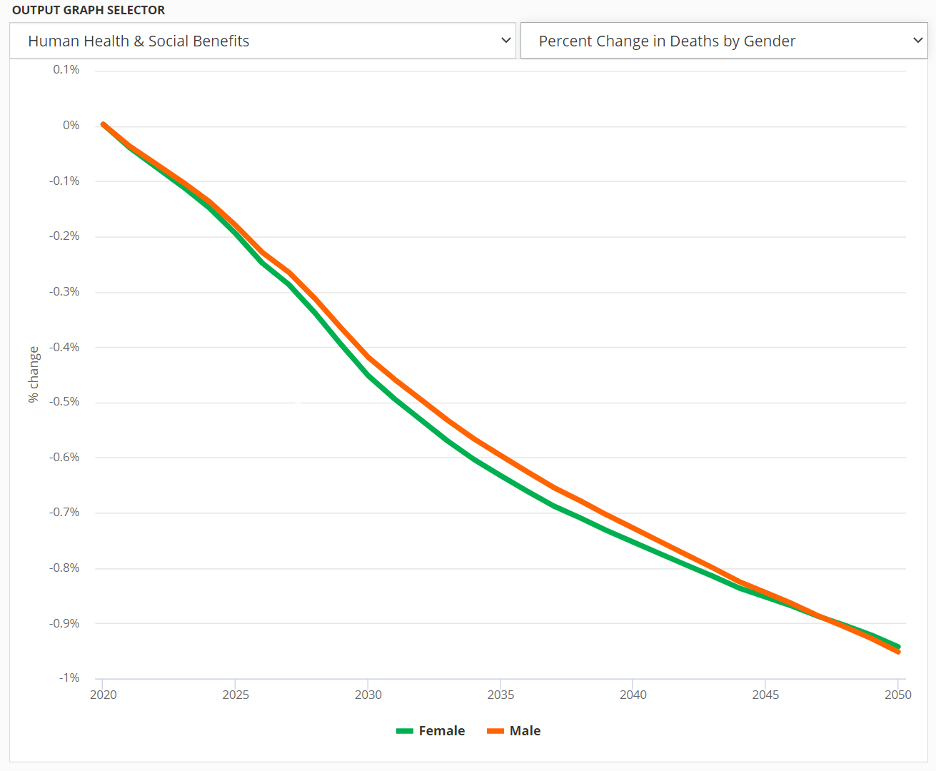 Percent Change in Death by Gender in the NDC Pathway Scenario

EPS 3.3 includes an updated user interface to set policies across multiple subscripted elements at once. This is a significant improvement for industrial sector policies because it allows the user to toggle more than 20 subscripted industry sectors at once, rather than setting each individually. 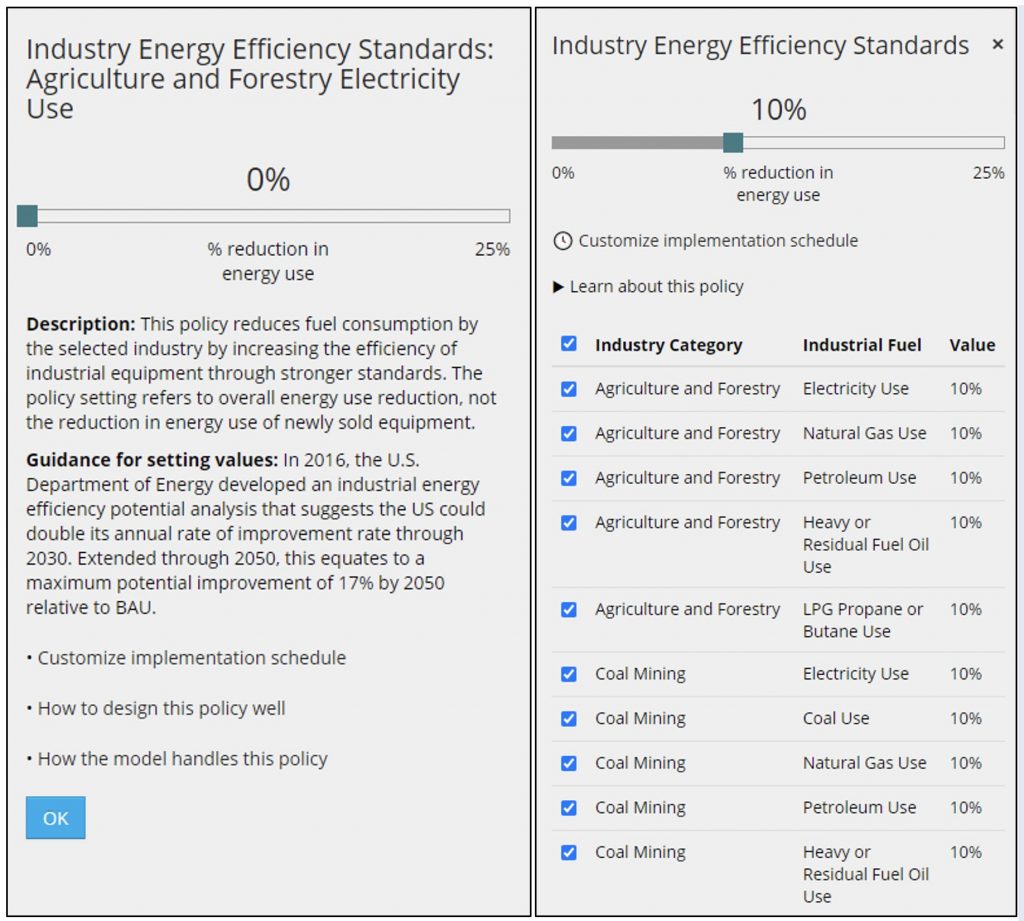 EPS 3.3 also adds two new policies. The new “Buy In-Region Products” policy reduces imports and shifts purchases to goods produced within the model region. This allows the user to capture the economic benefits associated with clean technology deployment in the model region. For example, the U.S. may increase the share of domestically produced EVs associated with an EV sales standard. By shifting a portion of imports to domestic manufacturing, the user can see the potential jobs and GDP impacts associated with meeting EV demand with additional domestic vehicles.

Another new policy is the “N2O Abatement” lever, which allows the user to mitigate N2O emissions produced by chemical industry processes by destroying N2O rather than venting it. If fully implemented, this policy can reduce U.S. industrial greenhouse gas emissions about 1 percent by 2050.

The U.S. NDC scenario has been updated to include the most recent policy changes and incentives for EVs and building efficiency. The NDC scenario reduces U.S. emissions 52 percent below the 2005 baseline by 2030 and 91 percent by 2050. By 2050, the NDC scenario adds 5.4 million job-years per year, adds 2.65 percent to national GDP per year, and reduces premature mortality by 37,000 incidents per year.[2]

Additional data updates in the 3.3 release include new power plant capital cost data from NREL’s 2021 ATB, endogenous learning rates for electric vehicles, and updated forecasts of HFC emissions. Users can explore the entire list of updates on our Version History Page, as well as test the new outputs and features and build their own policy scenarios at https://www.energypolicy.solutions/.

Sign up for EPS emails to be sure you’re always updated when a new model version is released.

[1] For detailed methodology, see the About tab of the “Frac of Health Outcomes by Demographic Trait” variable in the EPS model files.

[2] A job year defined as one year of work for one person, for instance a new construction job that lasts five years is equal to five job-years. This is a more accurate measure than “job” because one job may last for five months or five years.

Enter your email address to have updates from Energy Innovation delivered to your inbox.
« Tipping Points In Tropical Forests: Carbon Fluxes In The Amazon And Africa After The Megafires: What’s Left And What’s Next »
We use cookies to provide social media features, analyze our traffic, assist you with contacting us, and help improve your user experience on our website. By clicking “OK” you consent to the use of these types of cookies. However, some system cookies that are needed for this website to work properly have already been set. Learn more in our Privacy Policy.