Rapid cost declines in renewable energy technologies made them the cheapest available sources of new electricity, even without subsidies, in 2017. And in many locations across America, building new wind energy projects is cheaper than running existing coal-fired power plants.

This dynamic is apparent in the 27 coal plant closures announced by utilities in 2017, totaling 22 gigawatts (GW) of capacity, capping a decade where nearly all power plants retired since 2008 (including 50 GW of coal) were powered by fossil fuels. The U.S. Energy Information Administration forecasts coal closures will continue through 2020 and could set an all-time annual record in 2018. 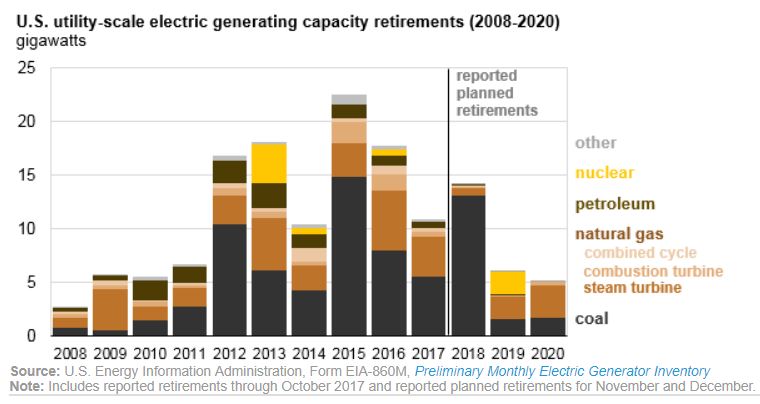 Levelized Cost Of Electricity Plummets For Wind And Solar

The 2017 edition of Lazard’s annual Levelized Cost of Electricity (LCOE) study shows unsubsidized onshore wind and utility-scale solar are both cheaper than new coal in many parts of the U.S., and are cost-competitive with new combined-cycle natural gas on a levelized cost basis. LCOE accurately compares the economics of different generation technologies by measuring the total cost of first building a power plant, then operating it over its assumed lifetime. Think of it as evenly comparing apples to oranges. 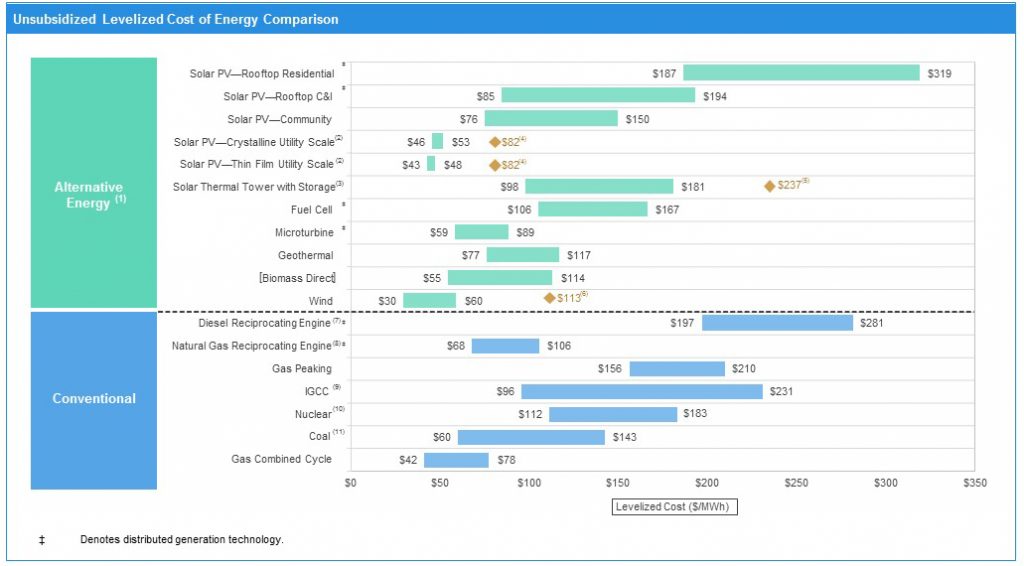 As the LCOE of renewable energy continues to decline (dramatically, in the case of utility-scale solar photovoltaics) building new wind and solar costs less than simply continuing to operate existing coal plants. Lazard reports the mean subsidized LCOE for utility-scale solar fell 72% from $178 per megawatt-hour (MWh) in 2009 to $50/MWh in 2017, while the mean LCOE for wind energy fell 47% from $85/MWh to $45/MWh over the same time span. These declines outstripped the cost trends for natural gas-combined cycle (down 27%), coal (down 8%), and nuclear (up 20%) from 2009 to 2017. 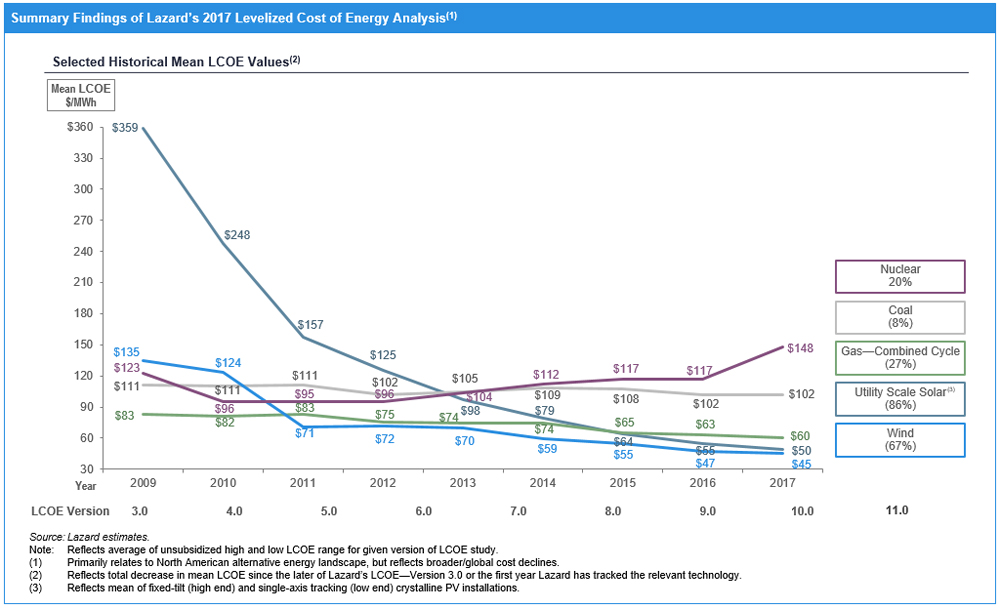 The changing cost dynamic between renewable energy and fossil fuel is underpinning surging wind and solar installations across the U.S. As the weighted LCOE for utility-scale solar fell from more than $350/MWh in 2009 to less than $50/MWh in 2017, cumulative installations rose from 1 GW in 2009 to more than 30 GW cumulative installed capacity in the third quarter of 2017. 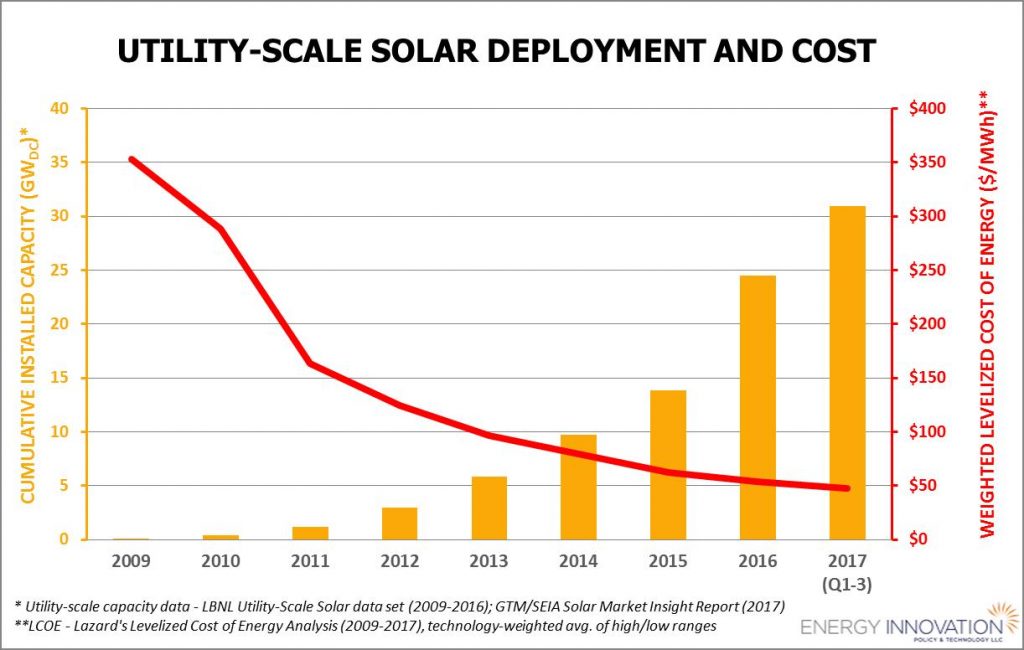 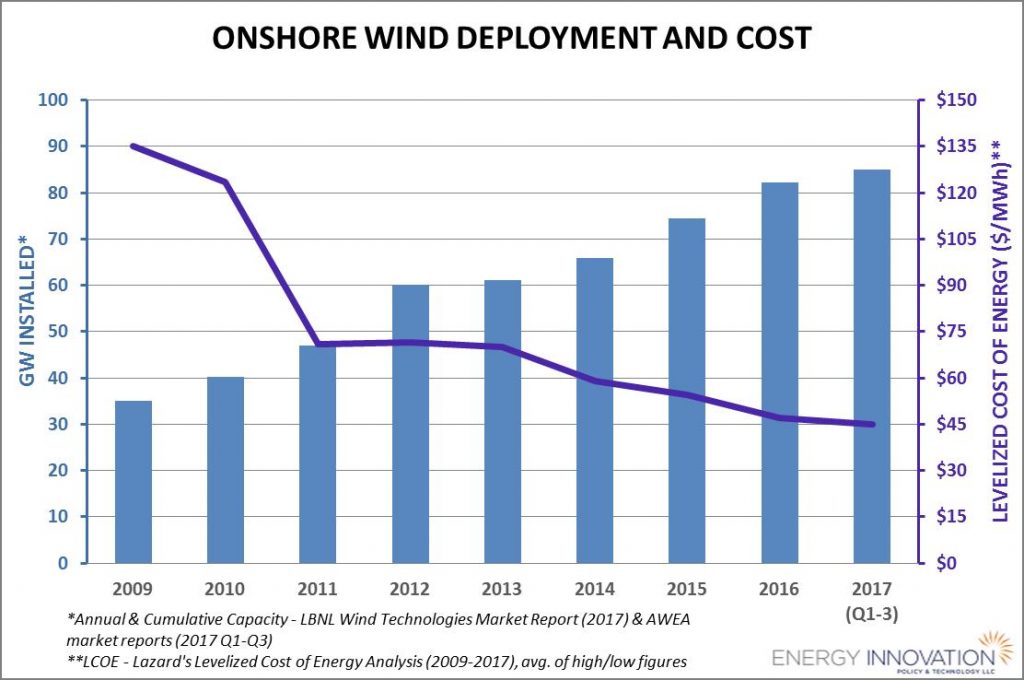 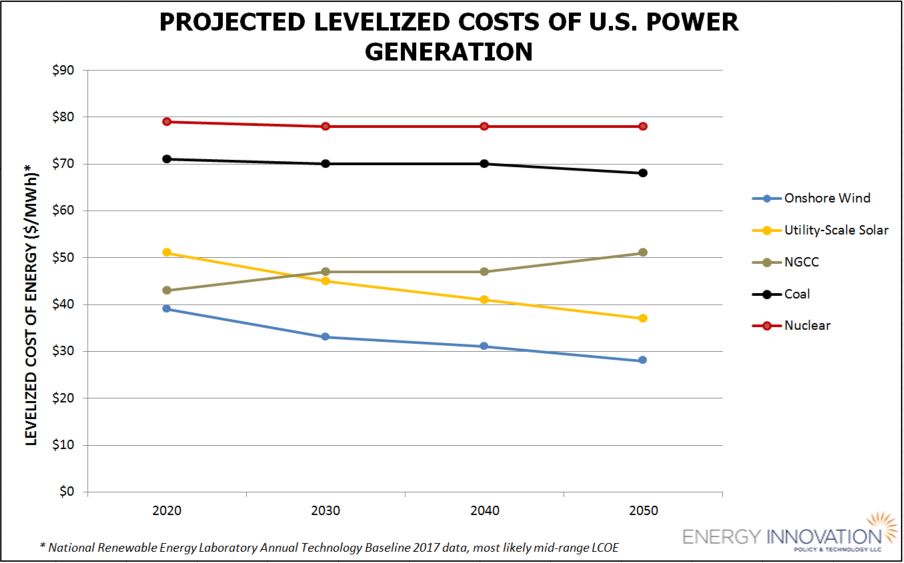 When other renewables like hydropower and geothermal are added to the tally, total renewable energy generation could make up 26.5% of total U.S. generation capacity in 2020, up from 19.9% today – and solar and wind would combine to equal 16.7% of total capacity. Of note, FERC does not count distributed solar (i.e. rooftop solar) generation in this tally, meaning solar energy’s total contribution could be much higher.

By focusing on policies that work with changing U.S. energy economics, utilities can improve their bottom line and regulators can reduce consumer costs, while accelerating the clean energy transition.

Enter your email address to have updates from Energy Innovation delivered to your inbox.

« Analyzing the Likely Impact of Oversupply on California’s Carbon Market Must Consider State’s 2030 Emissions Goal and Potential for Clean Tech Breakthroughs Trending Topics – It’s Time To Refine How We Talk About Wholesale Markets »
We use cookies to provide social media features, analyze our traffic, assist you with contacting us, and help improve your user experience on our website. By clicking “OK” you consent to the use of these types of cookies. However, some system cookies that are needed for this website to work properly have already been set. Learn more in our Privacy Policy.