Fourth quarterly California carbon market auction of 2017 completely sells out of allowances at highest auction price in system history, with most allowances ever sold in a single auction, but additional allowance sales could undercut efforts to get on track for the state’s ambitious 2030 emissions reduction goal.

“A record 89.3 million allowances sold in November’s auction, at a new record high price of $15.06 per ton.  All available allowances were purchased, unlike some previous auctions when buyers purchased less than 20 percent of offered allowances. The sale will raise approximately $1.3 billion in total, with $860 million going to the California Greenhouse Gas Reduction Fund.”

“Robust auction sales are excellent short-term news, but they raise a long-term risk California will fail to meet its 2030 climate target.  Steady auction returns enable efficient revenue investment and beat back criticism that the program is fundamentally flawed, but these results indicate a worsening of market oversupply.”

“Emissions are below cap levels, meaning more allowances are in circulation than needed.  This permits an allowance stockpile to build up (banked, in market parlance).  For emitters, banking allowances now at lower prices make sense as it lessens the need to acquire allowances when prices rise.  Left unaddressed, oversupply and the resulting banked allowances threaten California’s 2030 emissions reduction success.”

“Our research (initial research in March 2017, second research release coming in December) estimates the California-Quebec market already has built up a 160 million metric ton allowance oversupply which is forecast to reach 290 MMT by 2020, and could negate 30-40 percent of emission reductions under the cap-and-trade program through 2030.” 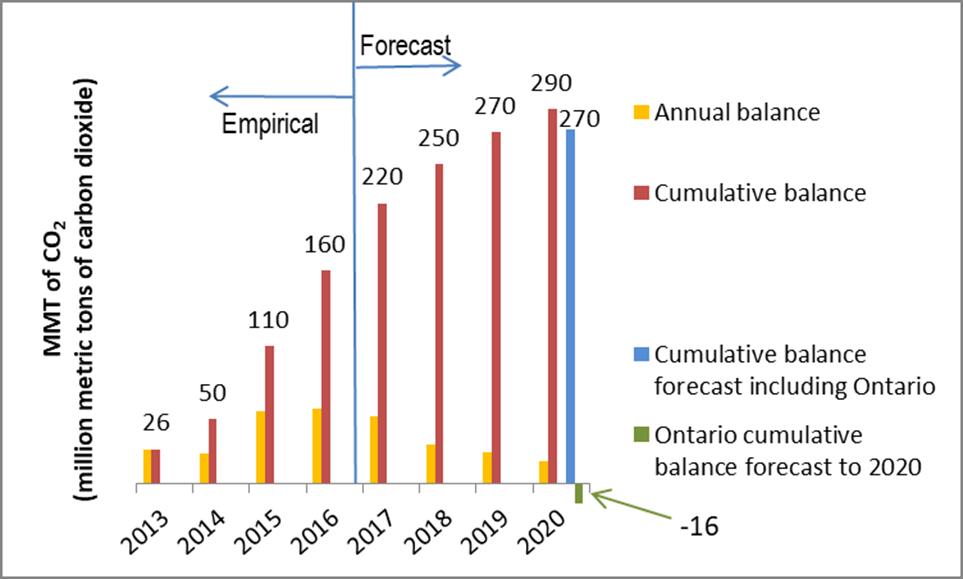 “These results show market demand is strong enough to handle the injection of previously unsold allowances, which were re-introduced into the market for the first time because two consecutive prior auctions sold out above the price floor.  16 million previously unsold allowances were re-introduced at this sale, a 25 percent increase above the regularly scheduled amount.  Future auctions will re-introduce similar quantities, mostly nullifying the past effects of the price floor, which held back 118 million allowance from supply.  A recently approved regulatory change means that California-owned allowances which  are unsold for 24 months will be diverted to the Allowance Price Containment Reserve (ACPR), where they are only to be sold if prices spike.  Our analysis estimates about 40 million of the 118 million will end up in the ACPR with the remainder re-entering supply through auctions.”

Enter your email address to have updates from Energy Innovation delivered to your inbox.
« Trending Topics – Flexibility, Not Resilience, Is Key to Wholesale Electricity Market Reform Hal Harvey’s Insights And Updates – The Real Deal In Abating Climate Change: Four Zeros »
We use cookies to provide social media features, analyze our traffic, assist you with contacting us, and help improve your user experience on our website. By clicking “OK” you consent to the use of these types of cookies. However, some system cookies that are needed for this website to work properly have already been set. Learn more in our Privacy Policy.