Wildfires are increasing in intensity, frequency, and size, decimating ecosystems and devastating communities from the western United States to Australia, the Mediterranean, and the Amazon. The 2018 wildfire season generated $149 billion in damages in California, equivalent to 1.5 percent of the state’s gross domestic product. Wildfires are often heralds of change for the landscapes they burn, not only harming humans and other organisms but also leaving behind drastically altered ecosystems. As worries about the impacts of wildfires grow, researchers are ramping up efforts to understand wildfires’ water quality repercussions in both natural waters and distribution systems.

Public concerns about water quality tend to focus, understandably, on bacteria, viruses, and other waterborne pathogens, which account for 4 billion cases of waterborne illness and 1.8 million related deaths across the globe each year. Less widely recognized threats, like dissolved metals and other molecular health hazards, lurk in runoff from industrial sources, home waste, and building materials. But the $300 billion global bottled water industry is propelled not just by actual threats to human health from municipal and shared drinking water sources. Indicators like color and taste can lead to perceived water quality concerns, regardless of whether the molecules impacting color and taste affect human health. Wildfires can contribute to all of these areas of concern: pathogen transport, dissolved toxins, and perceptions of inferior water quality.

Historically, wildfires have been linked to adverse water quality in headwaters basins. In these basins with relatively few human-built structures, wildfires tend to primarily burn vegetation and produce ash high in organic carbon, nutrients, and other fine sediment. Precipitation events following wildfires can then lead to elevated turbidity, dissolved organic carbon, and suspended solids in surface waters that receive the ash-laden runoff.

Water quality changes after the 2015 California fires are consistent with data from other burned watersheds around the globe. After the Green Wattle Creek Fire (2019-2020) in Sydney, Australia, and the Fourmile Fire (2010) in Colorado, researchers recorded elevated suspended solids, nutrients, and organic matter in streams and lakes. Changes in water quality were especially notable in Sydney, where the wildfires burned watersheds containing reservoirs that provided 85 percent of greater Sydney’s municipal water. Even when wildfires burn few structures and have minimal effect on municipal water treatment systems, water-related impacts can be costly. Following a 2002 fire, the city of Denver, Colorado, spent $26 million to restore its water collection and distribution system. Similarly, a 2003 fire near Canberra, Australia, cost the city nearly US$40 million to restore water utilities. Post-wildfire expenses vary with the extent of restoration efforts, from removing sediment from reservoirs to updating pipes and physical infrastructure.

The frequency at which municipalities may face increased post-wildfire water treatment costs is alarming. A 2021 study by Colorado State University researchers concluded the combination of watersheds contributing water to the Front Range of the Rocky Mountains (including the Denver metropolitan area) may experience fire-related water quality impairments in 15.7-19.4 percent of future years. But impacts to source water collection systems and pre-treatment water quality are only a piece of the wildfire-water puzzle, as fires affect water distribution systems too.

Extreme fire seasons in recent years have increasingly pushed wildfires into urban spaces, impairing source water quality and affecting the water already within municipal water treatment plants, distribution lines, and water infrastructure. The Camp Fire (California, 2018) and the Marshall Fire (Colorado, 2021) both breached the wildland-urban interface, burning over 18,000 and 1,000 structures, respectively. In November 2018, the Camp Fire ripped across more than 150,000 acres in Butte County, California, killing 85 people and capturing the title of California’s largest and most destructive wildfire to date. In December 2021, a remarkably dry early winter paired with extreme winds led to a 24-hour wildfire in Boulder County, Colorado, that killed two people before heavy snowfall doused it the following day. Both fires have been used as case studies to examine the impacts of urban fires on municipal water supplies and distribution systems.

The Camp Fire burned not just natural carbon sources like trees and shrubs, but also electronics, vehicles, and building materials. Surface water runoff in the months following the fire carried debris and dissolved toxins into receiving streams and lakes, elevating both natural components (like dissolved organic carbon and nitrogen) and toxins (like metals and plastics) in source waters. In addition, in-home water quality testing identified volatile organic compounds, such as benzene, in distribution lines. Research published in AWWA Water Science found benzene levels in distribution systmes exceeding state and federal exposure limits in numerous structures. Do not drink/do not boil water advisories during and after the fire limited consumption of unsafe water, but lingering mistrust plagues the impacted communities. 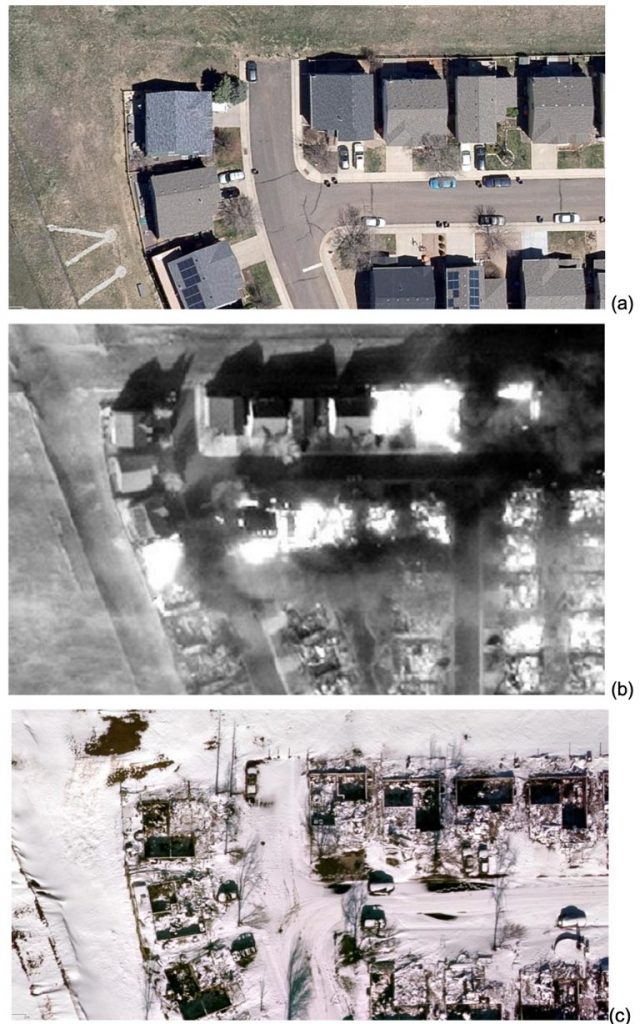 Figure 1. Satellite imagery depicting the Sagamore neighborhood, Colorado, (a) before, (b) during, and (c) after the Marshall Fire. Fires that burn a combination of structures and ecosystems have complex and varied impacts on drinking water sources and supply lines. Photos from Fischer et al., 2022.

Six months after the Camp Fire, a research team led by Purdue University scientists interviewed 233 households within the Camp Fire burn community regarding perceived post-fire water quality. The vast majority of participants (83 percent) reported uncertainty about water safety, and 85 percent sought alternate (non-municipal) water sources after the wildfire. Water advisories in the months following wildfires can be complex, complicated by sporadic data sampling, with water status oscillating between “safe to drink,” “boil water,” and “do not drink/do not boil.”

Communities impacted by the 2021 Marshall Fire also experienced impaired water quality in distribution lines during and after the fire, but constituents of concern were different than in the Camp Fire. The Marshall Firespread rapidly through communities, burning all thousand structures in a single day and creating gushing holes in the water distribution system. Along with widespread power outages, these holes left water managers hard pressed to keep distribution systems pressurized, jeopardizing access to municipal water to fight the fire. Given the urban setting, the decision was made to run untreated water through the municipal lines for a brief period, leading to municipal boil water advisories.

Climate models suggest that wildfires will gain in frequency, intensity, and size. As a result, water managers are settling into a future in which fire protocols and post-wildfire testing strategies will be the norm. The research conducted following the Marshall and Camp fires, in conjunction with the broader base of wildfire/water quality researchers and research, will help lay the groundwork for future resiliency efforts and community preparedness.

Enter your email address to have updates from Energy Innovation delivered to your inbox.
« Energy Innovation® Launches South Korea EPS model, Updates India And Mexico EPS models Smoke-Ready Communities: Learning To Live With Wildfire Smoke »
We use cookies to provide social media features, analyze our traffic, assist you with contacting us, and help improve your user experience on our website. By clicking “OK” you consent to the use of these types of cookies. However, some system cookies that are needed for this website to work properly have already been set. Learn more in our Privacy Policy.