California is in the middle of another unprecedented fire year. More acres have burned to date than any year previously on record. For those directly exposed to the fires, or indirectly impacted by the smoke now spreading far and wide (see Figure 1), the scenes look and feel apocalyptic. Discouragingly for many, it may already seem too late to stave off the worst impacts of climate change.

Amid the bleak outlook, there are important lessons to learn about the climate and non-climate drivers of California’s fire activity. The clear and mounting evidence that climate change is influencing—and will continue to influence—California’s recent fire activity augments the rationale for more aggressive efforts to reduce global greenhouse gas emissions. At the same time, more attention to the non-climate factors that drive fire risk, such as the political and social dynamics of fire management, may also be crucial for reducing future impacts.

Figure 1. A new experimental forecast from NOAA provides nationwide, vertically integrated forecasts of smoke. During many recent forecast periods, much of the western United States was dominated by smoke emanating from wildfires in California, Colorado, Oregon, and other states. See forecast at https://hwp-viz.gsd.esrl.noaa.gov/smoke/index.html.

In California, like much of the West, many factors interact to increase annual burned area. For instance, a century of deliberate fire suppression has delayed natural fire regimens and loaded wildland areas with abundant fuels. The nearly 3.5 million acres burned thus far in 2020 is relatively small compared to estimates of 4 million acres (or more) of natural burning that may have occurred each year in California during prehistoric times (Stephens et al. 2007). Furthermore, people have increasingly used wildland areas for building homes or for recreation, compounding wildfire risk and contributing to the vast majority of ignitions.

Yet fire management and local human activities alone cannot explain the staggering increases in observed fire extent and severity. In 2016, John Abatzoglou of the University of Idaho and Park Williams of Columbia’s Lamont-Doherty Earth Observatory found significant differences in extreme fire conditions and burned area between scenarios with and without human-driven climate change. They estimated that human-driven climate change resulted in a doubling of burned area between 1984 and 2015 throughout the western United States. This research was reviewed in more detail in a previous post by Emily Jack-Scott.

California has already experienced a fivefold increase in annual burned area from 1972 to 2018 and an eightfold increase in summer forest fire extent. A more recent paper from 2019, led by Williams and Abatzoglou with five other co-authors, found that the strongest correlate of increased summertime forest fire activity is a variable known as vapor pressure deficit (VPD). VPD, considered an indicator of aridity, depicts the “thirst” for moisture in the atmosphere as the difference between actual and potential moisture in the air. 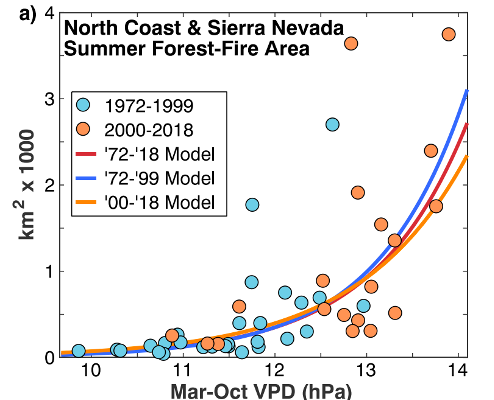 VPD can increase with warming temperatures and, as demonstrated in California, even small changes in VPD are associated with large changes in burned area. This results in an exponential relationship between VPD and fire risk (see Figure 2). Furthermore, observed changes in temperature and VPD are consistent with climate models that account for rising greenhouse gas emissions, strengthening the link between increasingly arid conditions and human-driven climate change. In their analysis, the study authors conclude that “the large increase in California’s annual forest‐fire area over the past several decades is very likely linked to anthropogenic warming.”

While Williams et al. expressed confidence in the influence of climate change on California’s summertime fire weather, the authors left open questions about the fingerprint of climate change on wildfires in autumn, when some of California’s most devastating recent blazes have occurred. For example, the deadly Camp Fire (Paradise) and Woolsey (near Malibu) Fire of 2018 both occurred in November. Weather in this period in both northern and southern California is characterized by downsloping coastal winds and generally lower precipitation, which has historically made for more favorable fire conditions.

Uncertainties about drivers of autumn fire behavior in California prompted a new study, published this summer in Environmental Research Letters. A postdoctoral research fellow at Stanford’s Department of Earth System Science, Michael Goss, led the research along with Williams, Abatzoglou, and four other co-authors. Its title summarizes their primary conclusion succinctly: “Climate change is increasing the likelihood of extreme autumn wildfire conditions across California.” 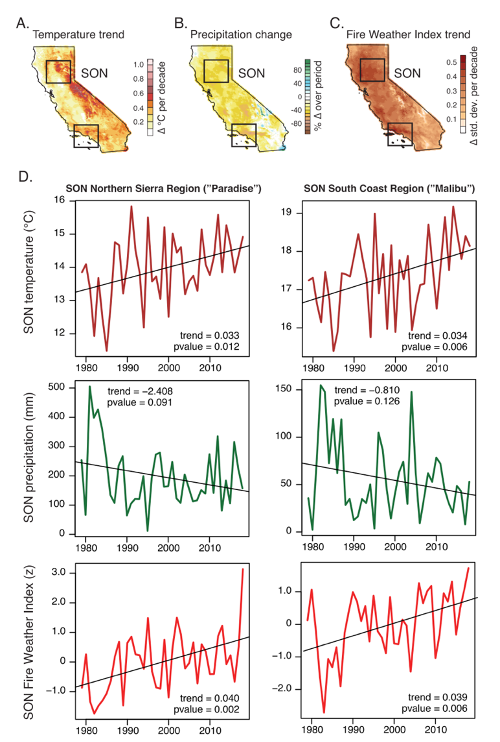 Figure 3. Observed climate trends across California. Maps show 1979–2018 trends in observed autumn-mean (A) surface air temperature (˚C per decade), (B) precipitation (% change over period), and (C) FWI (units per decade). For precipitation, trends are displayed for each grid point as change relative to the 1979 value. Black boxes on each map indicate the boundaries of the Northern Sierra (‘Paradise’) and South Coast (‘Malibu’) regions discussed in the text. (D) Time series plots show observed autumn mean temperature, precipitation, and FWI for the Northern Sierra (‘Paradise’; left) and South Coast (‘Malibu’; right) regions for 1979–2018.

The study draws upon both historical observations and projected trends in variables that portend fire risk between September and November (referred to as “SON” in Figure 3). Specifically, the study analyzes California’s data on maximum temperature, minimum relative humidity, wind speed, and precipitation, which can be combined into a frequently used Fire Weather Index (FWI). ­Aside from documenting trends in increasing autumn season temperatures (+0.3°C per decade) and decreasing precipitation (-12 mm/decade), the analysis shows the number of days with extreme fire weather doubling since the late 1970s. This is significant because most large fires (60 percent) started within the first two days of extreme fire weather.

Days with extreme fire weather can also be a helpful indicator of how much worse conditions may get when considering future climate change. In this way, they can also serve as a barometer of the benefits of greenhouse gas reductions. As a baseline for comparison, from 1950 to 2018 there were only moderate increases in the probability that any given autumn season would have more than five days with extreme fire weather. During that period, the percentage increased from 35% to 40%. By century’s end, however, this percentage jumps to about 60% under high emissions scenarios, while staying below 50% for moderate emissions scenarios.

From this analysis, the ultimate conclusion of the Goss et al. 2020 study is not optimistic. The authors conclude: “Absent a strong decrease in autumn wind patterns, observed and projected temperature and precipitation trends portend increasing risk that autumn offshore wind events will coincide with critically dry fuels—increasing the potential for wildfire catastrophes when fires affect populated areas.”

Still, projections of actual fire behavior critically depend on assumptions about an important non-climate factor: the availability of fuels to burn. For this reason, efforts to reduce fire risk also center around approaches to reducing accumulated fuels such as prescribed burns, managed wildfire, or mechanical thinning. As of yet, however, fuel-thinning activities occur at a fraction of the rate required to match the pace and scale of the problem.

A paper published earlier this year in Nature Sustainability by Stanford PhD student Rebecca Miller along with Chris Field and Katherine Mach explores the particular barriers and enablers of prescribed burning in California. At the outset, the authors detail the scope of potential fuel treatment needed as on the order of 20 million acres in California. Yet across districts where consistent reporting is available, total prescribed burned acres was less than 20,000 in 2018, or about one-tenth of one percent.

Their paper aims to understand this gap by drawing upon interviews of 45 key contributors to policy discussions about prescribed burning in California. Interviewees included federal and state government employees, legislative staff, nonprofit representatives, and academics. The interviews identified manifold barriers to the deployment of prescribed burns. Obstacles like liability laws, negative public opinion, limited funding, and weather conditions were each mentioned by 70 percent or more of the interviewees. Many of these factors contributed to a risk-averse posture toward prescribed burning, which currently limits its deployment. Furthermore, funding that could support prevention is routinely diverted to suppression efforts, creating a feedback loop for elevated fire risk and making it more difficult to provide incentives for proactive burning, which many of the interviewees identified as a solution.

Despite these barriers, between 2013 and 2018, there has been an encouraging rise—nearly a doubling—in prescribed burns in terms of number of acres burned. Interviewees credited this growth with infrequent escapes (less than two percent of controlled burns escape, and the average escaped area burned was only 14 acres), along with leadership and political collaboration (such as between former Governor Jerry Brown and past CAL FIRE Director Ken Pimlott). Capitalizing on these enablers through policies that support private, state, and federal implementers may serve as a path forward to reducing fuel availability for wildfires (see Figure 4). 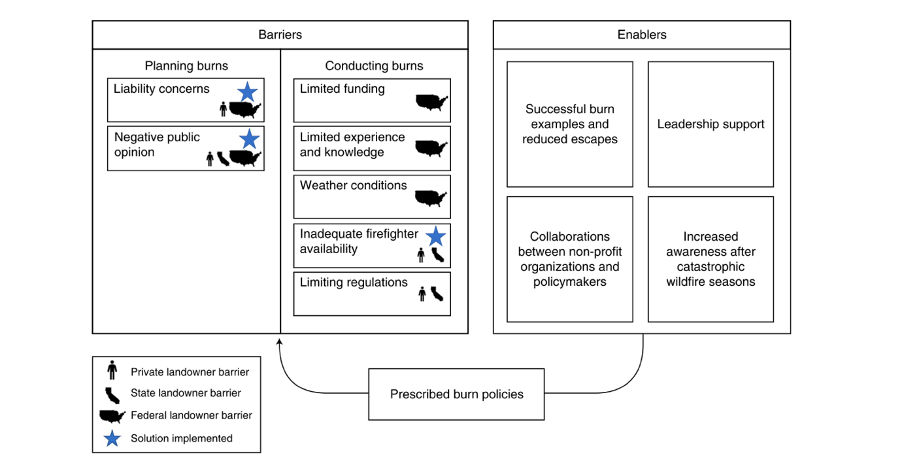 Drawing together the findings of this recent research, several insights should serve to motivate future action. Firstly, even though the west has recently experienced record warm temperatures (see Figure 5), today’s high temperatures will rank among the cooler periods of the next century (and beyond) if aggressive steps are not taken to reduce greenhouse gas emissions. As bad as conditions may seem today, they are only likely to intensify without mitigating an important, and growing, underlying cause. Therefore, the connections between climate change and wildfire, such as provided by Williams et al. 2019 and Goss et al. 2020, demonstrate why reducing emissions remains an important part of reducing future extreme fire conditions. 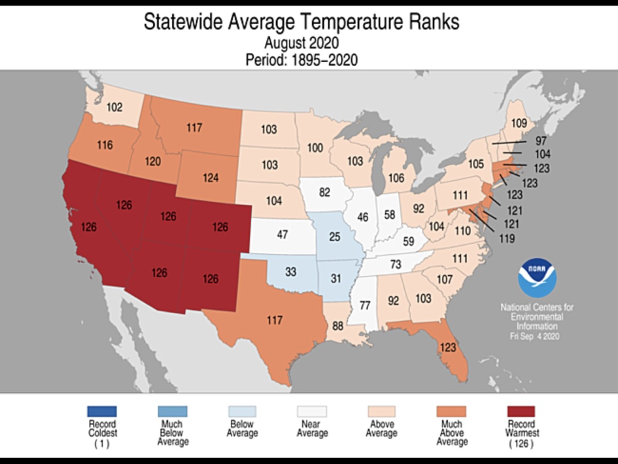 Figure 5. U.S. National Oceanic and Atmospheric Administration compiled data on statewide average temperature ranks. Many above-average or record warmest temperatures have occurred in states with unprecedented wildfire activity. These products are available for download at: https://www.ncdc.noaa.gov/temp-and-precip/us-maps/

A second insight is that in addition to the influential force of climate change in shaping wildfire activity in California, aggressive action in other arenas may also help reduce fire risk. To date, federal, state, and private landowners have not even come close to addressing the scope of fuel reductions needed. Sociopolitical analyses of key players involved in fire management, such as by Miller et al. 2020, highlight solutions that may overcome the sizable hurdles to reducing elevated fuel availability.

While the outlook for fires in California remains deeply worrisome, the many human connections to wildfires’ origins also point to human solutions. Armed with this knowledge, we have reason for hope that actions taken both globally and locally hold promise for safer communities and more balanced ecosystems in the years to come.

Enter your email address to have updates from Energy Innovation delivered to your inbox.
« Five Technological Pathways To Reach A 100 Percent Clean Electricity Future: Delivering Enormous Health And Job Benefits Without Increasing Customer Costs Climate Impacts Of Scaling Up Biofuels And Bioenergy »
We use cookies to provide social media features, analyze our traffic, assist you with contacting us, and help improve your user experience on our website. By clicking “OK” you consent to the use of these types of cookies. However, some system cookies that are needed for this website to work properly have already been set. Learn more in our Privacy Policy.