Moving society to near zero carbon emissions will entail a substantial amount of distributed clean energy generation. Distributed generation can occur at household or neighborhood scales, such as through rooftop solar photovoltaic (PV) panels. A recent feasibility analysis by Project Drawdown estimated that distributed PV generation could compose nearly 40 percent of all solar PV production in a zero emission energy system.

As important as this direct contribution of distributed PV may be, adoption patterns of carbon-free technology also illustrates important social dynamics that influence the speed and scale of energy transitions. Knowing who is—or is not—participating in the adoption of cleaner energy sources can help guide more effective policy and communication strategies. For example, commonalities in participation across different groups of people may help to justify and expand strategies that are shown to work well in many contexts. On the other hand, disparities in participation reveal underlying problems where targeted interventions may be required to ensure a just, equitable energy transition is achieved.

Recent analyses of rooftop solar adoption across the United States illuminate good and bad news. Consider two studies making use of a nifty dataset of rooftop solar deployment from Google’s Project Sunroof. Against the backdrop of today’s acute partisan division, one study finds encouraging evidence of ideological diversity among solar adopters. However, a second study provides a more worrisome outlook in terms of disparate adoption rates between racial groups. 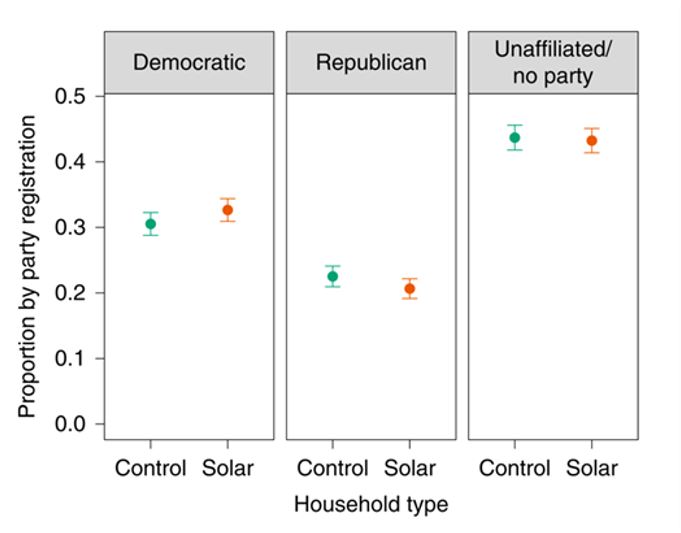 Figure 1 presents the proportion of registered Democrats and Republicans among households of solar adopters and neighboring control households where no solar adoption has occurred. Note this data features sampled households in states where party registration data is available. The full text of the study also uses a different dataset for sampled locations in states where this data is not available, but it finds similar results.

The first study led by Matto Mildenburger, a political scientist at University of California Santa Barbara is titled, Households with solar installations are ideologically diverse and more politically active than their neighbors. The authors use Google’s household level data alongside individual partisanship and voter participation datasets, which are linked to randomly selected samples of households distributed across the U.S. One sample contained about 4,100 households that had adopted rooftop solar. Another identically sized sample constituted a “control” group of households with no rooftop solar installed. As Figure 1 shows, rooftop PV adoption has occurred across Democratic, Republican, and Unaffiliated lines.

This data shows that, in aggregate, Democrats are adopting rooftop PV at higher rates than Republicans. Within partisan groupings, however, the difference between adopters and non-adopters is so slight as to be insignificant. This means that knowing the party affiliation of a randomly selected household wouldn’t help predict whether the household has adopted rooftop solar. Encouragingly, this suggests that political ideology is not driving rooftop solar adoption in the United States. The authors’ analysis concludes: “households composed of Democrats are only about four percentage points more likely to have rooftop solar than households composed of Republicans.”

One more insight stands out among other interesting findings the authors tease from this data. Across all partisan groupings, rooftop PV adopters are significantly more likely to vote in both primary and general elections. This raises interesting questions for future research about how an ideologically diverse coalition of rooftop PV adopters could mobilize to resist or defend various policies that might affect incentives or support for PV ownership. 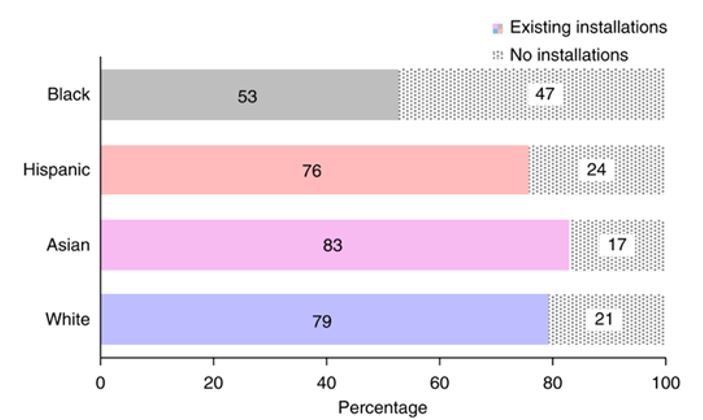 Figure 2 provides the percentages of each census tract with and without existing rooftop PV installations. To be classified as a census tract with a dominant ethnic or racial group in this context, at least 50% of the population self-identified as a single race or ethnicity. Note caption text paraphrased from source Sunter et al. 2019.

The second study was led by Deborah Sunter of Tufts University and UC Berkeley and is entitled, Disparities in rooftop photovoltaics deployment in the United States by race and ethnicity. These authors used the same Google database of PV adoption but aggregated to Census tract levels in order to link with data on race, property ownership, and income.

The findings are striking. When first looking only at racial disparities (Figure 2), majority black census tracts are 26 percentage points behind majority white census tracks in having any existing installations. A staggering 47 percent of majority black areas have no installations at all relative to 21 percent or 17 percent lacking in white or Asian communities, respectively. The authors suggest this dearth further exacerbates the divide because significantly fewer majority black neighborhoods benefit from the social diffusion effect when early adopters increase the rate of adoption in the immediate environment.

The picture becomes more dismal when placing this data in context of income and home ownership figures (and normalizing relative to state-average rates of adoption). In so doing, they are able to test the hypotheses that differences in the uptake of solar is driven by factors beyond prevailing explanations of economic means or home ownership.

The results (Figure 3) show that even when increases in income (left) and homeownership (right) are considered, significant differences in solar adoption between racial categories persist. When accounting for either income or home ownership, the authors report majority black, Hispanic, and Asian areas exhibit less rooftop PV adoption relative to predominantly white or mixed census tract areas.

Sunter’s analysis does not offer much about underlying causes of disparities but do point to “disproportional lack of initial deployment” in some communities as a partial culprit. They suggest that longitudinal studies, rather than their point-in-time analysis, could help better understand adoption patterns. One notable difference between these studies is that Sunter’s paper uses census tract-level data as compared with Mildenberger’s household level assessment. Even so, Mildenberger and co-authors say their work, which also had access to demographic data, largely replicates findings provided by Sunter. Mildenberger’s statistical results, for example, found income, race, and home ownership to all be significant factors in predicting solar PV adoption.

Taking these two findings together lends useful insight into the adoption patterns of distributed PV generation, an important piece of the climate-energy challenge. Rooftop PV as a case study is uniquely amenable to data-rich analyses and studying it helps us understand more about who is participating in the remarkable energy transition now underway. As Mildenberger found, deep ideological divides about climate change in the U.S. do not appear to be stalling participation in this transition. Despite overt political divisions about climate change, among other issues, room for optimism exists that a politically diverse coalition could galvanize around preferences for carbon free, distributed electricity generation. Yet, racial inequities are glaring and persist despite attempts to explain them by other factors like income and homeownership. While more analysis is needed to explain this, Sunter’s analysis shows that deliberate efforts are likely necessary to overcome disparities. For example, the NAACP announced a Solar Equity Initiative in early 2018 to collaborate with private organizations such as GRID Alternatives and Sunrun to ensure community solar installations, solar installation job training, and good financing options for low- and moderate-income residents (NAACP Solar Equity Initiative). The initiative which has seen its genesis in California seeks to expand similar measures to a total of at least five U.S. states and would continue support for one full year.

Scaling up such deliberate efforts will be an essential step to ensure that the economic and personal benefits of taking part in the clean energy transition are enjoyed as equitably as possible.

Enter your email address to have updates from Energy Innovation delivered to your inbox.
« How Much Energy Do Data Centers Really Use? Hal Harvey’s Insights And Updates: Net Zero Industry Emissions Possible by 2070 »
We use cookies to provide social media features, analyze our traffic, assist you with contacting us, and help improve your user experience on our website. By clicking “OK” you consent to the use of these types of cookies. However, some system cookies that are needed for this website to work properly have already been set. Learn more in our Privacy Policy.