As societies around the world continue emitting heat-trapping greenhouse gases into the atmosphere, they face the consequence of sea level rise. Since 1900, sea levels have increased 8 inches on average globally, and by 2100, sea levels will likely rise between 1 and 4 feet (Sweet et al. 2017).

But because Earth’s ice sheets are at risk of collapse, putting an upper bound on just how much sea level rise might occur is difficult —a rise of 8 feet by 2100 is physically possible. The scope of people and properties exposed to potential damage from sea level rise is immense.

In the United States alone, 3 feet of sea level rise by 2100 threatens 4 million people with inundation, increasing to 13 million people with 6 feet of sea level rise (Hauer et al. 2016). When storms hit, higher seas push floodwaters further inland. In 2017, hurricanes, severe storms, and flooding resulted in deaths, disrupted lives, and over $280 billion in damages (NOAA NCEI 2018). Communities around the U.S. are making investments to recover from these damages and prevent them from escalating in the future. 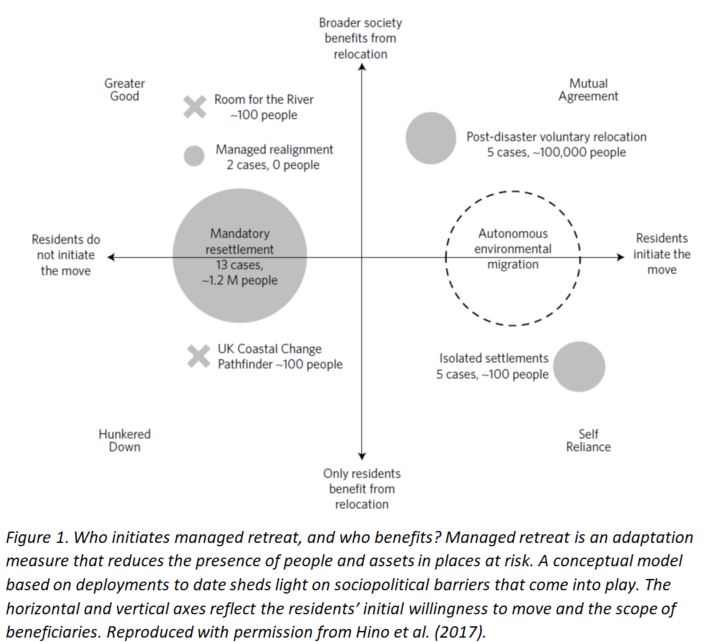 One way or another, people will be on the move in a changing climate. Disasters such as Hurricanes Maria or Katrina often create temporary displacement or permanent migration as people seek refuge. As places become more flood prone—or increasingly ravaged by fire or drought—people may decide to settle elsewhere. But those who are unable to finance their own relocation could end up trapped in place, and some governments will struggle to fund rebuilding infrastructure and communities.

So what approaches can manage rising damages, population flows, and potentially intensifying inequity? Where, when, and how should governments intervene to strategically manage the retreat of people and assets from high-risk locations?

Analyzing managed retreat experiences to date can shed light on these questions (Hino et al. 2017). Approximately 1.3 million people have relocated in response to natural hazard risks within 22 countries in all major world regions. Across these 27 documented cases of managed retreat, two factors—who initiated the retreat and who benefits from the retreat—combine to form a starting point for understanding barriers and outcomes in specific contexts (Figure 1). 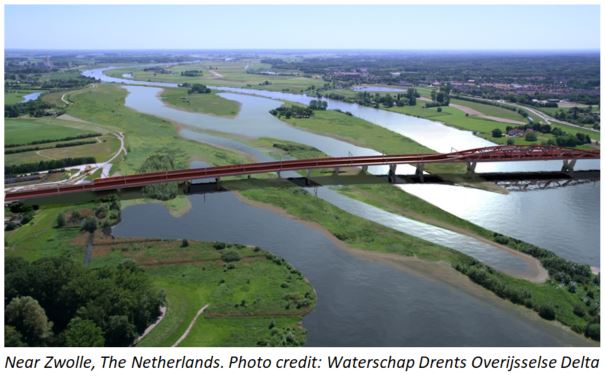 Broader societal benefits are an important driver of retreat. For example, as part of its Room for the River program, the Dutch government negotiated with around 75 different households in De Noordwaard, offering to purchase or elevate their houses. The primary motive was to restore a floodplain that would reduce risk for communities downstream. Across multiple locations in the Netherlands, approximately 150 households in total have relocated.

When driven by the people who want to relocate, retreat is more likely to occur. For example, managed retreat in the U.S. has occurred primarily through voluntary post-disaster buyouts of flood-prone properties (Siders 2018). Homeowners opt in, selling their properties to the government, and the land is converted permanently to open space. Through this type of retreat, more than 40,000 properties have been restored to floodplain over the last few decades.

Yet willingness to relocate is shaped by myriad psychological, financial, and cultural factors. Concerns about future costs of living, experiences with previous disasters, and attachment to the community all shape attitudes towards relocation (Binder et al. 2015; Bukvic and Owen 2016). Therefore, it is unclear exactly who will want to participate in retreat and when. Government officials sometimes assert homeowners have little interest in retreat, but instances exist when far more homeowners have requested assistance relocating than the budget allows (Koslov 2016). 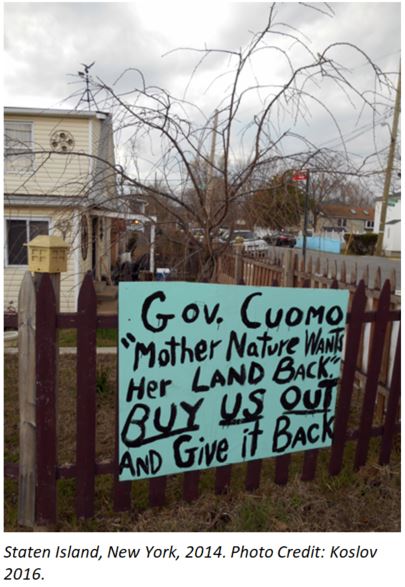 The “how” of implementation is equally important. In the past, hotly contested mandatory resettlements have cleared flood-prone locations of exposed people and assets, but simultaneously raised social justice issues. Even when voluntary, retreat is not straightforward. In some cases, communities may want to relocate together, whereas in others, retreat as an individual household decision is appropriate.

Navigating existing property rights as coastlines shift will demand innovations in governance and law across contexts, including situations where land tenure is weak or the territorial integrity of nations may be at stake. For lower-stress, community-driven processes, building trust in government officials and starting discussions early, before the next flood takes place, are essential enablers (de Vries and Fraser 2012).

Effectively managing climate change risks can support vibrant communities and robust economies. But for many adaptation options including managed retreat, researchers and societies at large are just beginning to understand how to deploy them effectively. Key knowledge gaps include the outcomes of retreat for those who move and for the communities left behind. Compelling innovations might be tested, for example incentivizing development in low-risk areas or facilitating a smooth transition for households who relocate.

As planning translates into action, critical opportunities exist to determine who must be at the table for each relevant decision to ensure a just, safe, and sustainable future.

Bukvic A, Owen G (2016) Attitudes towards relocation following Hurricane Sandy: Should we stay or should we go? Disasters 41:101–123.

Enter your email address to have updates from Energy Innovation delivered to your inbox.
« Trending Topics – Steel for Fuel: How Utilities Can Replace Fossil Fuel Expenses With Renewable Energy Earning Potential Improving Risk Assessment Of Extreme Events Across Past, Present, And Future »
We use cookies to provide social media features, analyze our traffic, assist you with contacting us, and help improve your user experience on our website. By clicking “OK” you consent to the use of these types of cookies. However, some system cookies that are needed for this website to work properly have already been set. Learn more in our Privacy Policy.