A version of this article was originally published on October 6, 2017 on Greentech Media.

Many U.S. states are considering moving from cost-of-service regulation for utilities toward a regulatory structure that incentivizes efficient fleet turnover, incorporates clean energy and other cost-effective technologies and stimulates smarter build-or-buy decisions.

These conversations are motivated by a number of factors, including aging infrastructure, new customer energy-use patterns, innovative competition from third-party service providers, the need for flexibility to accommodate carbon-free variable generation, a recognition of utilities’ unique role in the electric system, and a commensurate desire to ensure they remain financially viable.

Performance-based regulation has emerged as a promising potential solution to these challenges for many public utility commissions. Some, like Ohio, Minnesota, and Missouri, have initiated informal discussions or official workshop series on the topic. Others, like Pennsylvania and Michigan, have commissioned or directly conducted research. And still more, like Rhode Island, Illinois, and New York, have already taken concrete steps in this direction.

Luckily, the United Kingdom began moving in this direction a few years ago. Though the U.K. is different in its public policy priorities and regulatory capacity and philosophy than many U.S. states, its experience already provides several U.S.-relevant lessons.

First, some context: the U.K.’s Office of Gas and Electricity Markets (Ofgem) regulates 14 electric companies and four gas companies, akin to a public utility commission in the U.S.

More than 25 years ago, the U.K. market was restructured by splitting generation and distribution businesses, creating a centralized generation market and decoupling distribution utility revenues from sales.

In 2010, after a year of gathering stakeholder comments, Ofgem made another set of major changes. These reforms were designed to keep costs low for customers, seeking “better value for money,” and encouraging innovation among remaining monopoly utilities in gas distribution, electricity transmission and electricity distribution.

Ofgem’s changes “sought to put consumers at the heart of network companies’ plans for the future and encourage longer-term thinking, greater innovation and more efficient delivery.”

Many of these elements of PBR are under discussion in states around the U.S., but RIIO combines all of them into one holistic change to utility regulation.

Lessons from across the pond 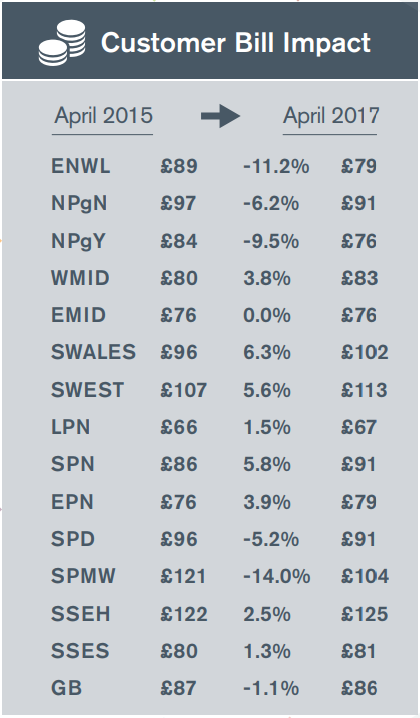 With that context, let’s dig in to the lessons from RIIO’s mid-term review. Ofgem recently released an open letter that begins the discussion about lessons, based on preliminary evaluation work.

Most important, experience so far supports the notion that revenue caps with totex and carefully calibrated outcome-based performance incentives can drive innovation, stabilize or improve utility profitability and focus utility attention on the outcomes customers most want.

In the first performance year, many distribution utilities beat forecasts for customer bills, exceeded most of their performance targets and achieved returns on equity averaging just over nine percent — 300 basis points more than their estimated 6 percent cost of equity.

Beyond performance numbers, anecdotal evidence also suggests that utilities have shifted their focus toward performance under RIIO. There is no indication that Ofgem and the U.K. utilities will move away from this regulatory structure after testing it over the last four years.

RIIO’s detailed design also provides important lessons for U.S. regulators looking to move toward rewarding utilities based on performance. Most of the emerging lessons relate to the difficulty of getting long-term projections right, as well as the need for automatic calibration along the way.

First, setting the right revenue cap is very challenging in a world of growing uncertainties. Will efficiency flatten demand or will electrification kick-start demand growth? External factors can cut both ways, but in the U.K., Ofgem notes that “forecasts for real price effects in setting allowances…appear in some instances to have resulted in gains for the companies.”

Thankfully, Ofgem designed the cap to share gains or losses between utilities and customers, but still, over the last few years, it is possible the utilities earned more than efficient business practices alone would have yielded under better-calibrated revenue caps.

Second, Ofgem’s midterm review identified the eight-year length of the multi-year revenue cap as a key source of uncertainty.

Of course, the tension here is between setting targets too far into an uncertain future versus creating a long enough runway for utilities to innovate and deliver desired outcomes. Ofgem points to rapidly changing technologies and competitive forces on the distribution side, urging a review of the length of the period “given the potential scale of future uncertainty facing network companies.”

Third, though some U.K. utilities are paying penalties for under-performance on outcomes, most are successfully earning incentives for performing well on outcomes.

This mix of penalty payments and incentive earnings is balanced, but it is worth noting that more utilities are performing (and earning) well than poorly on their outcomes. This may indicate more ambitious performance targets could have been warranted to better share benefits between utilities and customers.

Lesson for U.S. regulators: Information asymmetry is likely to tilt in favor of looser targets for utilities. It may be worth conducting independent studies of potential to assess whether proposed targets are sufficiently tight. It is less risky for customers to start with small financial incentives and work up, rather than over-incentivizing utilities and then having to squeeze incentives down to the right level.

Fourth, even though Ofgem worked with utilities and stakeholders to define outcome metrics carefully at the program’s start, a couple instances of ambiguity still arose in the performance period.

More lessons will arise as Ofgem continues its midterm review of RIIO, but we hope that these first emerging lessons will be useful to U.S. regulators considering performance incentive program design questions today.

Sonia Aggarwal is the director of America’s Power Plan.

Subscribe to our America’s Power Plan email newsletter to have the latest Trending Topics from Energy Innovation delivered to your inbox.
« Hal Harvey’s Insights And Updates – The Future Of Cars And Trucks Trending Topics – Flexibility, Not Resilience, Is Key to Wholesale Electricity Market Reform »