A version of this article was originally published on August 19, 2016 on Greentech Media.

In 2004, Colorado voters passed an initiative establishing, for the first time, a renewable energy standard (RES) through a popular vote. The legislative declaration for the initiative, Amendment 37, started with:

“In order to save consumers and businesses money…” and concluded with the idea that renewable energy should be developed to the “…maximum practicable extent…”. Colorado voters bet that costs for wind and solar renewable energy would drop as they were used more. It looks like the initiative’s promise could be coming true.

On December 15, 2013, the Colorado Public Utilities Commission (PUC) decided on a portfolio of resources the Public Service Company (PSCo) could acquire from among 6,200 megawatts (MW) of bids it received following a planning process that started in 2011. The planning included consideration of how both electric loads would change and how increasing power needs could be met by a variety of new generation resources, with the most focus on natural gas, wind and solar. But the real news was renewable energy’s emerging cost competitiveness: the approved portfolio included 450 MW of new wind and 170 MW of new solar photovoltaics reducing costs to consumers.

A striking notion then emerged. If wind and solar were coming into the PSCo competitive bid process at costs lower than the average of the utility’s existing generation fleet, then some of those existing generators must be producing power at costs higher than new wind and solar. And if those old plants cost more than the newer wind and solar plants, shouldn’t they be shut down or retired to make room for more of the cheaper, clean new energy generation?

This line of thinking confronted the utility’s financial reality: utilities are paid by regulators to invest capital, mainly in power plants (transmission and distribution investments typically compromise much smaller amounts), then can earn up to their authorized rate of return on the equity portion of invested capital.

Utilities thus have strong financial incentives to hang onto old plants and continue to profit from them, rather than sign power purchase agreements (PPAs) with wind and solar developers, on which they don’t profit. Instead, like other operating expenses, costs of paying for power under PPAs is returned to utilities in consumers’ rates without adding profit.

When utilities invest equity in power plants, their accounting shows these investments in “plant in service” accounts. Depreciation schedules are set up for these accounts to recognize the need to replace investments. Over time, depreciation tends to reduce these account balances.

Because utilities are incented to build these accounts by continuing to invest in in-service plants to keep them running, repair damages, and for other purposes like adding pollution control equipment, depreciation schedules rarely, if ever, run these accounts down to zero balances. Utilities earn on the remaining undepreciated balances in these accounts.

In Colorado, with low wind and solar costs at hand, the question became: how can fossil plants that raise the cost of service to consumers be shut down or retired in favor of new wind and solar to support, rather than oppose the utility’s financial interests?

Over the last two years, a team of clean energy advocates in Colorado and financial analysts in California have begun evaluating this question – and here’s what we found:

Seven of ten remaining PSCo coal plants have variable operating and maintenance (O&M) and fuel costs higher than new wind, assumed to be available in Colorado with the Production Tax Credit (PTC) at $25 per megawatt-hour (MWh). While the actual costs of new wind and solar being added to the PSCo system right now are confidential, we believe PSCo can build new wind at these prices.

One of PSCo’s sister companies reported wind costs in public documents filed at the New Mexico Public Regulation Commission for approval of three wind projects, acquired at $19, $20, and $21 per MWh. Lawrence Berkeley National Laboratory reports on wind costs around the country, including costs for wind in the “interior” section of the country, evidence costs in the same range.

Wind in Colorado has to provide its own transmission to connect with utilities, so these wind costs include lines necessary to deliver power. Also, no carbon or other emissions values were included in the financial analysis, so if these real costs were added to the evaluation, additional old coal plants would cost even more to run than new wind.

PSCo’s generating plants are represented in the chart below by bars; fuel and variable O&M costs in blue, and capital costs in black. Wind costs are shown by the horizontal dashed red line. Plant operating output in 2014 is represented by the dotted red line. The pink box highlights the seven coal plants we found whose “marginal cost of energy (MCOE)” or operating costs in 2014 exceed cost for new wind. All values for this financial analysis are taken from publicly available sources, such as Department of Energy, Energy Information Administration, company SEC filings, and public utility commission dockets. 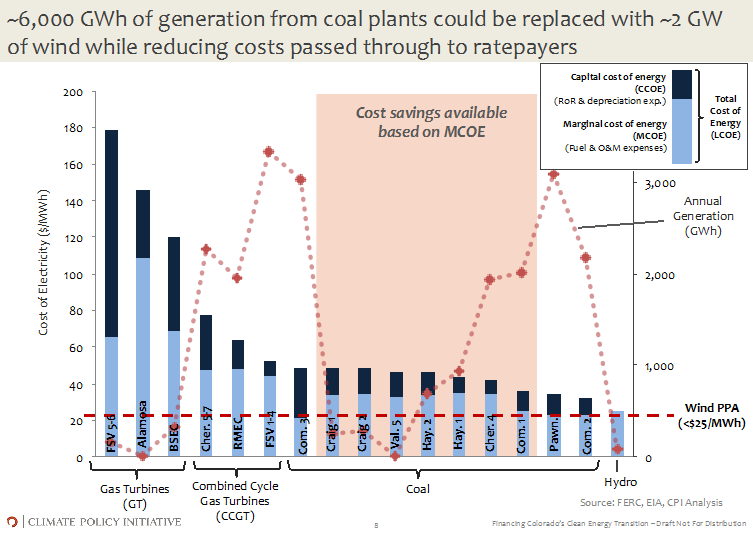 A preliminary analysis of flexibility contributions by the old coal plants indicates none of them appear to be critical providers of flexibility to match the natural variability of wind and solar. PSCo mostly uses its gas fleet for this purpose, since their coal plants are not designed to provide flexibility and are more expensive to use for this purpose than gas generators. System reliability is always a concern, so more work needs to be done to understand integrating added wind into PSCo’s operations.

The following chart shows our estimate of upward flexibility of PSCo’s generation fleet and total ramping capabilities on the PSCo system, supporting our preliminary finding that enough flexibility exists on the system to handle adding more wind. PSCo is justifiably proud of its accomplishments to date in integrating wind on Colorado’s relatively isolated system, and, while more needs to be done on this point, we have not encountered any reasons to think retiring the indicated coal plants and replacing their energy production with wind cannot be accomplished. 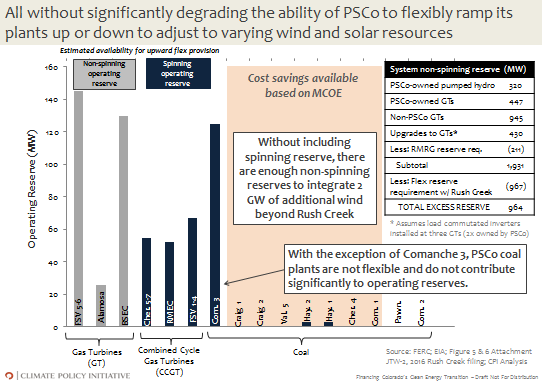 The old coal plants all have undepreciated balances in their “plant in service” financial accounts. Even with depreciation running that reduces the remaining balances, at the plants’ retirement dates (mainly in the late 2020’s and early 2030’s) some undepreciated, remaining plant balances are almost certain to remain. These amounts are often referred to as “stranded assets” since they don’t represent productive assets and could be removed from rates at the stockholders’ expense if regulators come to the conclusion that they are no longer “used and useful.”

One option for avoiding this hit to shareholders’ interests, already exercised in a previous round of early coal plant retirements under the 2010 Colorado “Clean Air Clean Jobs” Act, is simply to leave the undepreciated plant amounts on the books, and in consumers’ rates, as though the plants were still producing. These “regulatory assets” keep the company whole by allowing them both their return of and on their equity invested in the plants.

However, our financial modeling turned up two interesting alternatives:

There are currently three proceedings before the Colorado PUC where these ideas can be considered. One covers depreciation impacting the value of the old coal plants that are logical candidates for early shut down or retirements. In a second proceeding, PSCo is seeking approval to build and own a new 600 MW wind farm. The third docket is an “Energy Resource Planning” exercise leading to a new round of bidding and resource acquisitions, in which opportunities to acquire new wind and solar to replace old coal can be explored.

There are some reasons why Colorado may have crossed the threshold where new wind and solar can financially out-compete old fossil plants:

Since wind and solar costs are continuing to decline, other utilities and states could eventually encounter the situation described in our financial analysis of PSCo, where new wind can beat operating costs of old fossil generation. As other stakeholders look into financial impacts of crossing the threshold where new renewable energy costs less than old fossil fuels, we hope Colorado’s experience encourages similar analyses in other places.

Ron Lehr served as Chairman and Commissioner of the Colorado Public Utilities Commission from 1984 to 1991 and is an expert for America’s Power Plan and Western Grid Group.

Thanks to John Nielson and Uday Vardarajan for their input to this piece.

« Trending Topics – Alternatives to conventional utility compensation can unlock untapped value 21st Heinz Awards Honor Climate Change Visionary Hal Harvey for Strategic Leadership in Energy Policy and Innovation »
We use cookies to provide social media features, analyze our traffic, assist you with contacting us, and help improve your user experience on our website. By clicking “OK” you consent to the use of these types of cookies. However, some system cookies that are needed for this website to work properly have already been set. Learn more in our Privacy Policy.