This post was originally published to Medium on July 14, 2016

By CC Huang and Hallie Kennan

As Donald Trump likes to say, “China is beating us on everything.” While that’s a debatable proposition, there is one area where China is far ahead of the United States, and that’s in resilient transportation systems.

This is a big deal: Transportation systems represent a huge portion of public and private spending — to the tune of $1.2 to $1.4 trillion globally each year. And, in an era rocked by climate change and other disruptions, those systems must be able to weather all kinds of shocks — from fuel shortages to flooding. They must be, in a word, resilient.

So, here are eight ways China is taking the lead on resilient transportation: 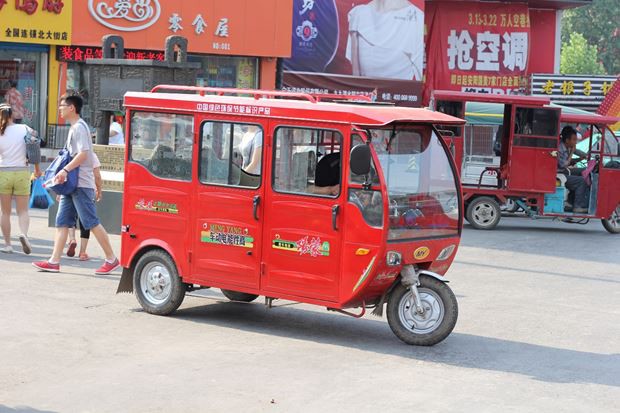 The extent to which electric vehicles are penetrating the Chinese market has spilled over to informal sectors. Shown here is an electric three-wheeled taxi in Anyuang (Source: V.T. Polywoda / CC BY 2.0)

China’s Five-Year Plan calls for five million electric and hybrid cars on the road by 2020. In 2015, the Chinese bought 188,000 electric vehicles (EVs) or plug-in hybrids, comprising just under one percent of the country’s car sales that year. While this sounds low, it’s a 223 percent increase from the previous year. China’s EV market is growing faster than in other countries. For comparison, EV sales in the U.S. declined from 2014 to 2015 — from 122,000 to 116,000, likely due to cheap gas prices which make gas-fueled vehicles comparatively more affordable.

Beijing in particular has been pushing for adoption of electric vehicles, requiring 30 percent of municipal vehicles to be powered by battery or fuel cell by 2016. Beijing and other cities offer preferential treatment to electric vehicles in their license plate lottery system, and exempt EVs from alternate-day driving restrictions. 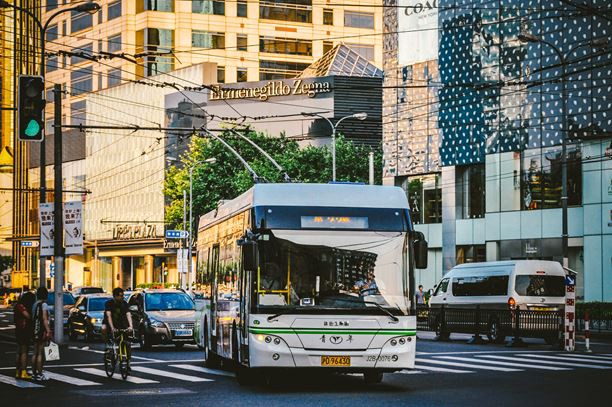 An electric trolley bus in Beijing. (Source: hans-johnson / CC BY 2.0)

With China’s push toward public transit in large, congested cities, electric buses are on the rise. Converting buses to electric power reduces particulate matter in the dirtiest and most populated regions, providing health benefits to millions.

More than 100,000 electric buses — one-fifth of the nation’s total — are on China’s roads today. At this adoption rate, China’s entire bus fleet could be electric by 2025. China is ahead of the game on the bus technology too — with new models that can charge in just 10 seconds and run for 5 km on a single charge. 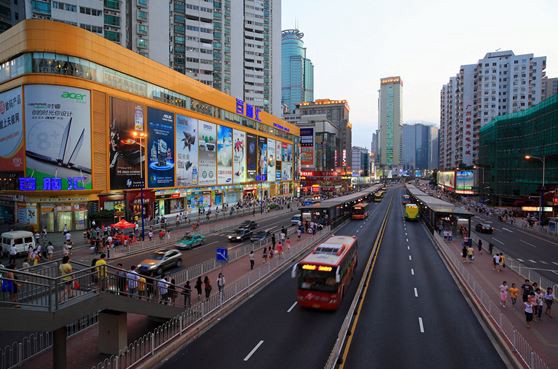 The design of BRT systems is incredibly important for maximum efficiency, Shown here, Guangzhou’s BRT occupies the middle lanes of a road so they don’t have to weave in and out of traffic to pick up passengers. Passenger boarding zones must be safe and well-designed as well (Source: ITDP)

Bus Rapid Transit (BRT) is much cheaper to construct than light rail or metro rail, and can offer the same level of service. The most successful BRT systems use designated, center lanes so buses can move efficiently from station to station without having to compete with automobile traffic.

In China, BRT systems now move over 4.3 million people every day — compared to less than 500,000 in the U.S. (Though it’s worth noting the U.S. population is less than a quarter the size of China’s.) In Changzhou, 25 percent of commuters use BRT. The Guangzhou BRT system includes elevated platforms for boarding, and is integrated with the city’s metro system and bike-sharing program. 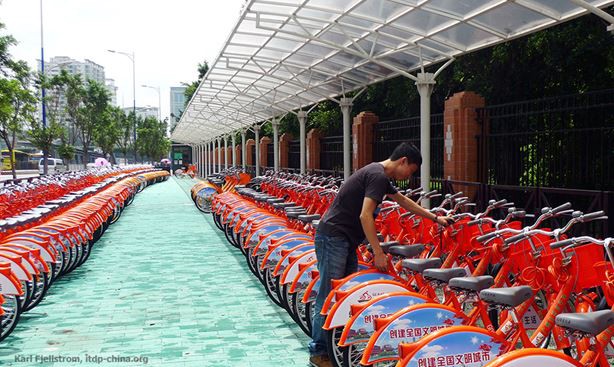 Of the 20 biggest bike-sharing programs in the world, 16 are in China. Hangzhou’s program is the most successful: more than 30 percent of its commuters rely on bike-sharing. In Beijing, bike-sharing has been central to its efforts in reducing pollution. 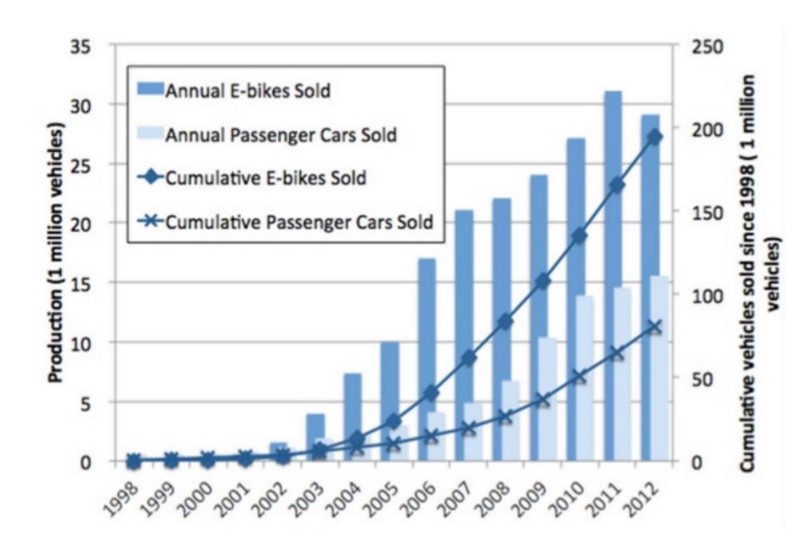 As this chart shows, e-bikes have become the fastest and largest growth of alternative transportation in China. (Source: University of Tennessee, Knoxville)

In the 1990s, there were just a few thousand electric bikes (or e-bikes) in China; now, there are over 200 million. Electric bikes are especially resilient because even if the whole grid goes down, they can be powered by old-fashioned human energy (i.e. pedaling). 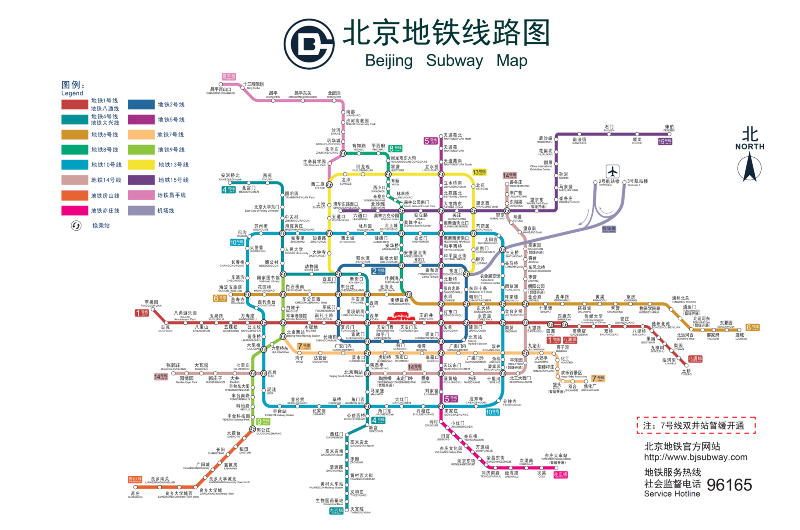 Beijing’s metro systems has expanded rapidly–16 lines have been added since 2002. The metro system average over 9.2 million trips per day and over 3.41 billion trips total in 2014. (Source: The Beijinger)

China is home to nearly 30 metros — including four that are among the ten busiest systems in the world. Seven more metros are under construction, and 18 are in the planning stages. Shanghai and Beijing’s metro systems, each spanning more than 500 km, are the longest and second-longest in the world. For comparison, New York City’s subway, the largest in the U.S., is less than 400 km long.

China’s metros provide affordable mobility to its citizens, strengthening economic resilience. Even with Beijing’s recent metro fare increase, most rides only cost about three to eight yuan, or $0.45 to $1.45. 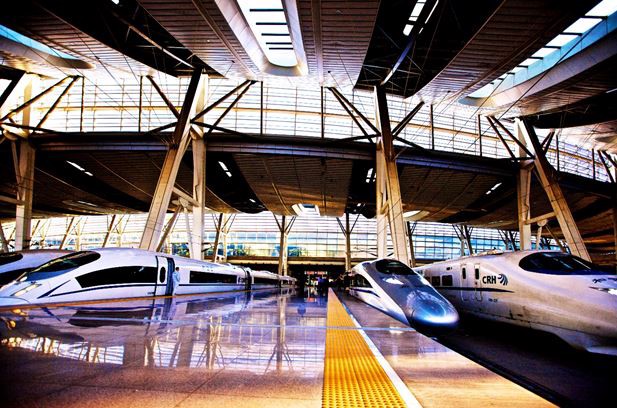 China’s high-speed rail system has beautiful and comfortable trains, which makes them now a preferred model of transit, even over flying. (Source: The United States Army Band / CC BY 2.0)

In today’s connected world, transportation between cities is equally as important as that within cities. High-speed rail (HSR) systems can help, by covering distances that are too great for city buses or metro lines, but too near to require the hassle of air travel. HSR additionally contributes to urban resilience; in times of disaster, it can help people move quickly out of harm’s way.

China currently has the world’s largest HSR system, with more than 19,000 km of railways connecting 28 of China’s 33 provinces. The system had 2.5 million daily riders in 2014, a ten-fold increase since 2007. The Shanghai Maglev line is the first commercial HSR to use “magnetic levitation,” reaching speeds of more than 400 km/h.

China has found a cost-effective way to improve mobility without spending more money — by designing integrated transit systems. China’s high-speed rail network and its inter-city transit systems are connected in almost every city. Moreover, many Chinese cities use “smart-cards” that can be used interchangeably on the metro, bus, bike-share and taxi. 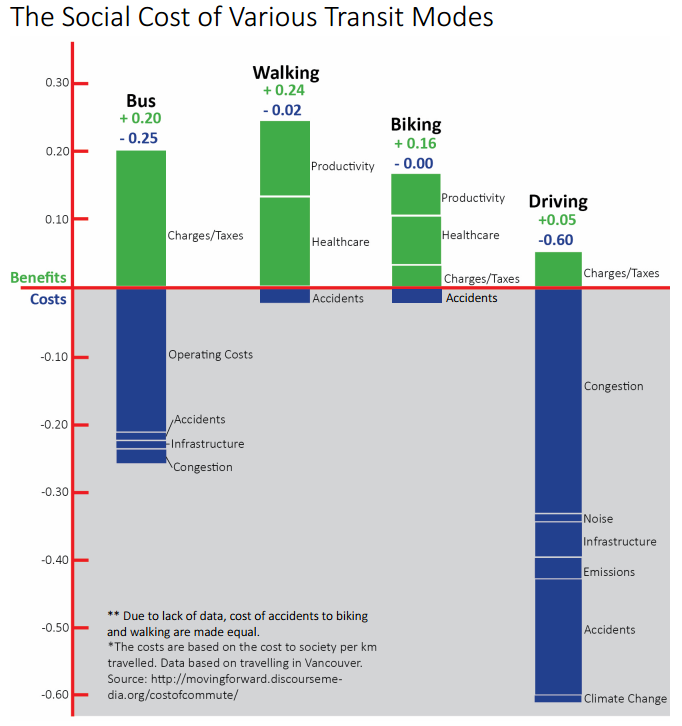 It’s important to connect different types of public transit systems when they are all much more efficient than driving. Bus, biking, and walking all yield more social benefits and fewer social costs than driving. By integrating them well, cities can really cut down on the costs of driving. (Source: Energy Innovation)

This post was produced as part of the Island Press Urban Resilience Project, with support from the Kresge Foundation and The JPB Foundation.

Enter your email address to have updates from Energy Innovation delivered to your inbox.
« New Analysis Shows Top Policies for Emissions Reduction in China Trending Topics – Alternatives to conventional utility compensation can unlock untapped value »
We use cookies to provide social media features, analyze our traffic, assist you with contacting us, and help improve your user experience on our website. By clicking “OK” you consent to the use of these types of cookies. However, some system cookies that are needed for this website to work properly have already been set. Learn more in our Privacy Policy.