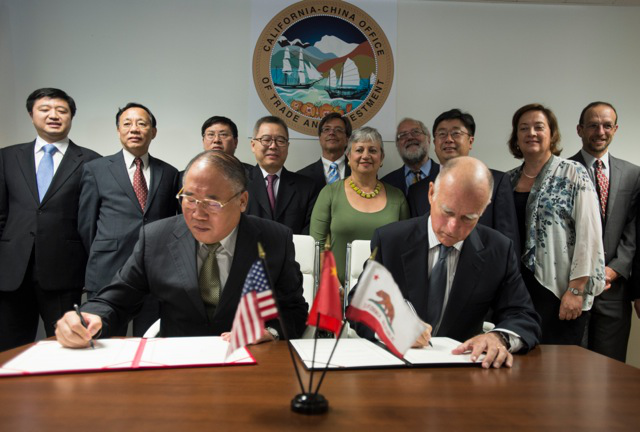 Energy Innovation is excited to be part of a new initiative that lies at the intersection of two of our priorities: strengthening California’s climate policies and helping Chinese cities reduce their carbon footprint.

Energy Innovation is pleased to be part of the “Ask an Expert” team that will provide substantive support for the collaborative.  “While China’s cities are rapidly expanding and California’s are mostly built, both share an interest in smarter urban patterns of growth,” said Chris Busch, Energy Innovation’s Director of Research. “California will never meet the Governor’s goal of reducing demand for transportation by 50 percent from today’s levels by 2030 unless progress is made in reducing reliance on car travel by giving people what they increasingly want: homes located near transit and shops and services.”

The sustainability of cities in China and California are critical to climate solutions. An increasingly urban China is the world’s top greenhouse gas emitter. California’s economy would be the world’s eighth largest if ranked as a separate country.

“I see the partnership between China, between provinces in China, and the state of California as a catalyst and as a lever to change policies in the United States and ultimately change policies throughout the world,” Brown said before signing the agreement.

The CCUCC is meant to advance the goals of the 2013 California-China agreement by providing “a dynamic and long-term exchange between cities in California and China seeking to mitigate carbon emissions, alleviate air pollution, and advance clean energy economy,” according to Chad Tudenggongbu at ICLE-Local Governments for Sustainability, which is helping spearhead the project.

Here’s how Tudenggongbu describes the effort:

The Collaborative also connects cities with subject matter experts from both countries to identify and address their unique challenges such as emissions reduction, air quality, transportation, water conservation, infrastructure resource and energy efficiency, waste management, among many other topic areas. Most importantly, the CCUCC is designed as the first step of a collaborative process that will set U.S. and Chinese cities on a sustainable and replicable pathway towards a long-term and effective city-to-city urban climate collaboration.

California and China have a lot to teach other about energy, climate, and urban design. California has been the nation’s leader in many greenhouse gas mitigation strategies. SB 375, the Sustainable Communities and Climate Protection Act of 2008, requires California’s metropolitan areas to revise regional transportation plans in order to meet the greenhouse emissions reductions targets established by the California Air Resources Board as an important strategy to implement AB 32, the California Global Warming Solutions Act. China is also very interested in learning from the innovation policies and culture that emerges from Silicon Valley and other technology hubs.

Compared to California, China is considered more advanced in fields such as bus-rapid transit (BRT), bike-sharing, and electric bicycles. Guangzhou’s BRT and Hangzhou’s bike sharing program are among the world’s best. Learning from such areas will be crucial in helping to push down California’s transportation-related emissions, which account for 47 percent of the state’s greenhouse gas output when oil extraction and refining are counted.

Energy Innovation is looking forward to this vital project and excited to help both California and China chart low-carbon paths for their cities.

Details on the California-China climate change agreement are available from Governor Brown’s office.

This presentation from the California Energy Commission provides some background on how the state is collaborating with Chinese officials.

Barbara Finamore and colleagues at NRDC has a good overview of how California and China can work together to cut pollution and protect the climate.