By Chris Busch, Director of Research

More than one million people move to cities every week, so the shape of urban areas and their transportation networks carry huge consequences for global energy use and greenhouse gas emissions.

Will these growing cities be sprawling or compact? Will residents rely on cars or alternatives to private vehicles?

The most important aspects of sustainable transportation and urban form can be distilled into 8 Principles, according to Planning Cities for People, a 2014 report from the ClimateWorks Foundation, Calthorpe Associates, the China Sustainable Energy Program, and the Institute for Transportation and Development Policy (ITDP). In brief, the 8 Principles argue that for cities to be livable and sustainable, they should be built around quality public transit, feature walking and biking paths, and deprioritize cars. 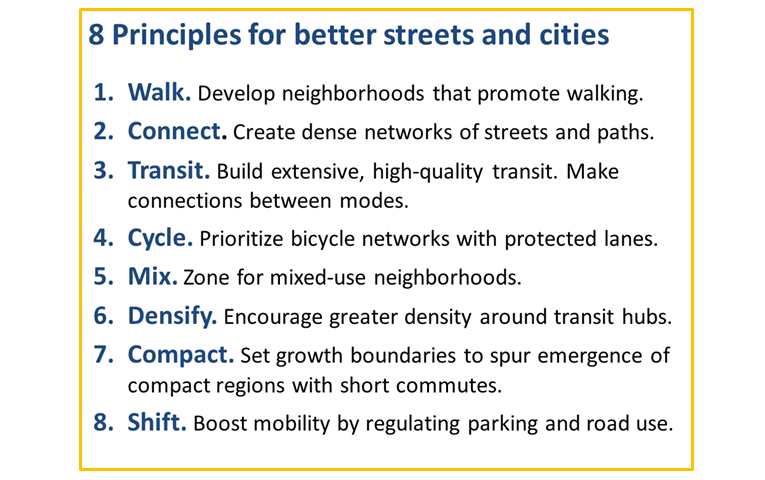 Energy Innovation recently completed a survey of the research literature related to The 8 Principles. Quantitative Insights into Urban Form and Transportation Solutions summarizes existing research while also identifying important gaps in evaluating the validity of these best practices.

The research shows The 8 Principles produce strong economic, environmental, and social benefits. There is significant evidence that the Eight Principles:

A study by ITDP of 21 U.S. transit corridor projects found that 14 of these projects directly spurred private capital investment greater than their cost. A Cleveland Bus Rapid Transit (BRT) line and a Portland Light Rail Transit (LRT) led to $5.8 billion and $6.6 billion in follow-on private real estate development, respectively. Because BRT is so much more cost-effective than rail infrastructure, the Cleveland project has a benefit-to-cost ratio 31 times higher than the Portland project.

New research in China, conducted by Dr. He Dongquan and Peter Calthorpe, looks at the effect of the 8 Principles on urban development in the world’s most populous nation. The authors project that following The 8 Principles would double overall air quality improvements beyond the vehicle and fuel policy steps included in China’s 12th Five Year Plan.

The hazy skies and packed roadways in Beijing should serve as a warning sign for the rest of China. Congestion and associated environmental damages have been shown to reduce Beijing’s economic output by 7 to 15 percent, or RMB 1.1 trillion-2.4 trillion ($183 billion-$393 billion) per year.
The recent New Climate Economy report provides good evidence of the broad global outlines of the carbon and cost-savings opportunity: $3 trillion saved on infrastructure over 15 years if policies consistent with the Eight Principles set the pattern for accommodating the expanding urban population.

More research is needed to develop more detailed greenhouse gas cost curves for urban solutions at the national, regional, and local level. Nonetheless, a California analysis by Calthorpe and Associates and collaborators points the direction for policy analysis. This work analyzes environmental impacts (air, water, land) as well as economic impacts, such as effects on household energy spending and government finances. The report concludes that there will be positive results for all these variables with growth in the direction of the 8 Principles. We need more work like this in other parts of the U.S., in China, and in other fast urbanization places.

Our literature review has made us more confident than ever that following The 8 Principles is imperative. From a policy perspective, it is time to act. With more than 60 million people—equivalent to France’s population—being added to cities every year, a rapid scale-up of solutions is urgently needed.
To learn more about EI’s work on sustainable cities, see Getting Cities Right in China, a joint report with the Paulson Institute, and a LiveScience piece describing the emissions-reduction benefits of urbanization.

Enter your email address to have updates from Energy Innovation delivered to your inbox.
« Video: Hal Harvey Presents on Top Energy Policy Principles Energy Innovation Trains Delegation from Wuhan, China »
We use cookies to provide social media features, analyze our traffic, assist you with contacting us, and help improve your user experience on our website. By clicking “OK” you consent to the use of these types of cookies. However, some system cookies that are needed for this website to work properly have already been set. Learn more in our Privacy Policy.