California Governor Jerry Brown is currently in the middle of a two-week trip to China, during which he intends to create stronger economic and trade relationships between China and California, as well as make a joint commitment to solving climate change.

In his speech at Beijing’s Tsinghua University last Wednesday, Brown highlighted the crucial role China can play in combating climate change. China and California are both large, productive economies. Brown believes this gives them an enormous opportunity to lead by example through establishing environmental policies and regulations that will reduce air pollution and minimize contributions to climate change. “We’re in one world, we’ve all got one big problem, and we all have to work on it… No one group can solve the problem.” To support his message, Brown has signed a non-binding, ‘ceremonial’ agreement with China’s Minister of Environmental Protection, Zhou Shangxian, to share information about pollution-reducing best practices and policy regulations. The press release and text of Brown’s speech at Tsinghua can be found here. 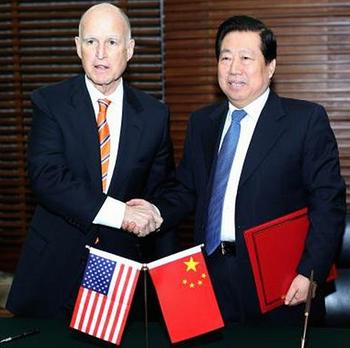 Governor Brown with Minister Shengxian, after signing collaboration agreement (courtesy of Office of the Governor).

Brown’s visit to China is extremely timely, given China’s desire to embrace clean energy technologies. New leadership in China is already working to address climate change and air pollution impacts through discussion of a price on carbon and aggressive development of renewable energy sources. China may also look at California’s vehicle emission standards as an example for further pollution reduction policy.

Opportunities in which California can benefit from China include the country’s robust energy innovation, namely in renewable energy and battery technologies. By improving California’s trade relationship with China, Brown believes the state could significantly benefit from several of these technologies being developed abroad. Brown mentions in his Tsinghua speech how China’s manufacturing of solar photovoltaic equipment has helped California increase is electricity generation from renewable energy. “In pursuing our goal of renewable energy, solar particularly, and photovoltaics specifically, China has been instrumental in driving down the costs and making available that technology.”

Over the next several days, Brown will meet with government official and business leaders to discuss reopening California’s trade office, which was shut down nine years ago. Brown also plans to form a China-California Joint Task Force. In addition to Beijing, Brown will also visit Shanghai, Nanjing, Guangzhou, and Shenzhen.