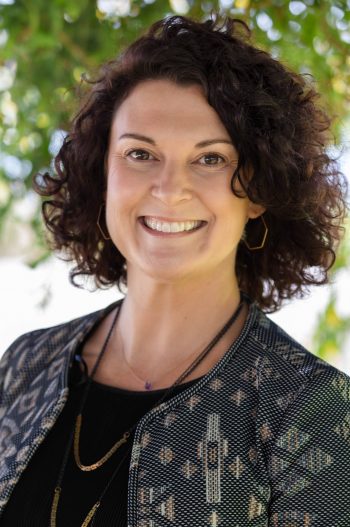 Sara Baldwin is Energy Innovation’s Electrification Director, where she leads the firm’s electrification policy practice area in tandem with the Electricity Program to develop a roadmap for economy-wide electrification. Sara provides guidance to federal and state policymakers across the U.S. along with other stakeholders on policy pathways to support the electrification and decarbonization of buildings, transportation, and industry.

Prior to joining Energy Innovation, Sara served as Vice President of Regulatory for the Interstate Renewable Energy Council (IREC), providing strategic direction for the organization’s regulatory program. In this capacity, she led IREC’s engagement on distributed energy resource regulatory policies in states across the country and supported organizational development, planning, and strategy. Sara has worked on dozens of publications and regulatory policy resources, including A Playbook for Modernizing the Distribution Grid, Making the Grid Smarter: State Primer on Adopting the IEEE 1547™-2018 Standard for Distributed Energy Resources, Charging Ahead: An Energy Storage Guide for State Policymakers, and Optimizing the Grid: A Regulator’s Guide to Hosting Capacity Analyses. On behalf of IREC, she served on the Technical Team for the U.S. Department of Energy’s SunShot Solar Market Pathways Initiative and the National Renewable Energy Laboratory’s Distributed Generation Interconnection Collaborative Advisory Committee.

From 2004 to 2014, Sara directed and implemented strategic clean energy policy and regulatory efforts in Utah as a Senior Policy Associate for Utah Clean Energy. She was named an “Innovator and Influencer” by Solar Power World in 2017 and one of “Utah’s Enlightened 50″ by the Community Foundation of Utah in 2012, and is a member of GridLab’s advisory board. Sara hosts Energy Innovation’s Electrify This! podcast and is the former host of the Grid Geeks podcast. She earned her B.S. in environmental studies and a B.A. in Spanish from the University of Utah, graduating with honors.

Why EVs Won't Break The Grid

What To Know About Replacing Gas Appliances In Your Home

Climate Law A 'Game Changer' For Highways And Bridges

Some Chicagoans Going All-Electric At Home To Fight Climate Change

The New EV Tax Credits Could Create A Huge Mess

Biden's EV Charging Standards Still Need Cash To Back Them Up

Could $5 A Gallon Gas Finally Get Americans Over EV Sticker Shock?

Big Electric Trucks And SUVs Are The New Gas Guzzlers

Assessing The Viability Of Hydrogen Proposals: Considerations For State Utility Regulators And Policymakers

Electric Vehicle Incentives In The Build Back Better Act

Building Electrification Could Recharge Our Economy – And Save The Climate

Which State Will Be the First to Ban Natural Gas in New Buildings?

Americans Should Have Their Trucks And Save The Climate Too

A National Clean Electricity Standard To Benefit All Americans

Report: All New Cars And Trucks In U.S. Could Be Electric By 2035

Advances Mean All New US Vehicles Can Be Electric By 2035, Study Finds

Electrifying All New Vehicles Sales by 2035 Can Be Done, Would Save U.S. Consumers $2.7 Trillion by 2050, Report Finds

Gas Heat And Stoves Are Warming The Climate. Should Cities Start Banning Them?

How Corporations Can Jump-Start Industrial Electrification In The US

The 7 Things Biden Should Do First To Tackle Climate Change

The Energy Giants Are Renewable Companies

Sara Baldwin, Amanda Myers, Mike O'Boyle
We use cookies to provide social media features, analyze our traffic, assist you with contacting us, and help improve your user experience on our website. By clicking “OK” you consent to the use of these types of cookies. However, some system cookies that are needed for this website to work properly have already been set. Learn more in our Privacy Policy.