California has been at the vanguard of global climate and clean energy policy solutions for decades, pioneering America’s first tailpipe emissions standards for cars, creating the country’s first economy-wide carbon market, and adopting one of the first renewable electricity standards. In 2016, the state achieved its goal to reduce emissions to 1990 levels by 2020 four years ahead of schedule, demonstrating California’s leadership for a low-carbon future.

As the world’s fifth-largest economy, California is proving that climate action generates investments and jobs. While cutting emissions, the state’s economy has emerged as the fastest growing in the U.S., with GDP increasing 21 percent over the past five years, boosted by a thriving clean tech sector. Electric vehicles are now the state’s top export, supporting 275,000 direct jobs with an average wage of $91,000—higher than the $80,000 statewide average manufacturing salary.

Robust economic growth has bolstered public support for climate policy, encouraging policymakers to keep pushing the envelope on decarbonization. California set two major goals in 2018: an executive order called for statewide carbon neutrality and Senate Bill 100 targeted 100 percent carbon-emission-free electricity. A year earlier, a rare two-thirds supermajority voted to extend the state’s cap-and-trade authority through 2030. No carbon pricing program in the U.S. has ever garnered such a level of support in a legislative vote or citizen ballot.

The Golden State is also setting America’s pace in the electric vehicle transition. In 2020, California became the first U.S. state to target 100 percent zero-emission vehicles in new car and SUV sales by 2035—and the state set the world’s first zero-emission rule for heavy-duty trucks, requiring at least 60 percent of new commercial trucks to be electric or powered by hydrogen fuel cells by 2035. 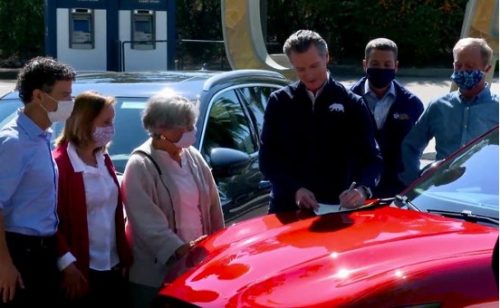 But major challenges still lie ahead. Retaining its position as a global climate leader means California must move faster to electrify buildings and decarbonize large industry. And the intensifying climate crisis means the state’s 2030 economy-wide target—a 40 percent reduction set in 2016—is no longer adequate. The state’s Air Resources Board has begun studying potential pathways to achieve carbon neutrality by 2035, suggesting it may soon bolster policy ambition in line with a safe climate future.

Energy Innovation has developed a California version of our Energy Policy Simulator to support smart policy design. This free and open-source computer model uses government data to estimate the impact of hundreds of clean energy and climate policies on greenhouse gas emissions, the economy, and public health in the state. Our team used the California EPS to analyze the state’s expected future emission trajectory, and found existing policy will likely fall short of reaching the state’s 2030 decarbonization target by an estimated 25 million metric tons. Our research identifies six policies that together reach the 2030 emissions reduction goal, while generating an estimated $7 billion in direct economic benefits and $14 billion in health and climate effects.

Economic and emissions effects of the California EPS policy recommendations

Energy Innovation’s California program also harnesses the power of data to highlight the state’s successes and propagate valuable lessons learned to support greater ambition and effective policy development across the U.S. and around the world. For example, 14 other states have followed California in adopting tougher vehicle emissions standards, while the state’s zero-emissions vehicle policies were a policy template for China’s vehicle standards.

Replacing technologies and systems that run on fossil fuels with alternatives like electric vehicles, heat pumps, and induction stoves that run on clean electricity is a proven way to reduce pollution and decarbonize the economy. Scaling up electrification across sectors requires a multi-faceted approach at the federal, state, and local levels.

The U.S. transportation sector is the largest national source of emissions, and burning fuel in vehicles contributes to well-documented public health hazards. Because a typical car, truck, SUV, or motorcycle may run for a decade or more, achieving net-zero emissions by 2050 requires all new car and truck sales be electric starting this decade.