Residents in disproportionately burdened communities—frequently lower-income communities of color—endure greater air, water, and soil pollution, as well as other environmental harms. Systemic barriers, including persistent structural racism, often have left such groups with fewer resources to protect themselves and to build resilience. Climate change is exacerbating these longstanding injustices, leaving historically marginalized communities even more vulnerable and more at risk for energy insecurity.

The clean energy transition presents an opportunity to work toward alleviating such harms. In particular, new research showcases how coupling existing state efforts (1) to accelerate renewable energy adoption in underserved low-income communities and (2) to replace aging gas distribution networks with district heating and cooling could amplify the benefits of such efforts. Such a holistic approach could transform overburdened communities into high energy-performance communities that are safer and more resilient.

Extreme heat events, fueled by climate change, are already taxing our energy systems. The consequences are especially severe in cities because of the “urban heat island” effect, wherein paved surfaces and lack of greenspace limit cooling at the land surface and generate more heat than natural landscapes. With these scorching heat waves, cooling will be needed more often and by more people. By mid-century, premature mortality associated with hotter summers is projected to grow by between 47 percent to 95 percent in New York City.

Two recent studies demonstrate the injustices inherent in these challenges. A 2022 study by Ortiz et al. found that low-income communities and communities of color will suffer the most from extreme heat events, which will exacerbate existing energy insecurity problems. Another 2022 study by Luna and Nicholas showed that our existing energy system disproportionately endangers these same communities, where energy infrastructure is often older and more poorly maintained.

In these areas, long duration “very hot” conditions are expected to be the most severe. Consequently, the cost of operating air conditioning for residents with the highest energy burden could increase to about 6.1 percent to 8 percent of their income. Some residents may be unable to afford such costs, leaving them particularly vulnerable to heat-related illnesses and premature death. By contrast, higher-income areas may experience less than four times the increase in the cooling burden, and their energy costs may range from nearly negligible to about 0.5 percent of income.

Aging and poorly maintained energy infrastructure in already-vulnerable communities compounds such threats. The Luna and Nicholas study evaluated the threat that leaks in the gas distribution system pose to public safety, focusing on neighborhood demographics. Specifically, the authors compared the relative frequency of gas leaks in neighborhoods across Massachusetts, which requires public reporting of leak location, hazardousness, first reporting date, and if/when a leak is repaired. They found significant inequities in the geographic distribution of gas leaks and in how quickly leaks were repaired.

Overall, people of color, limited English-speaking households, lower-income residents, renters, and adults with lower levels of education live in areas with higher leak densities, even when controlling for housing density. Leaks in these areas also were repaired more slowly, even within the same gas utility.

Across the nation, states and utilities are working to improve access to solar in underserved lower-income communities. Last year, Shaughnessy et al. compared existing rooftop solar policies and solar adopter income from 2010 to 2018 in more than 70 percent of the U.S. residential solar market. Among the policies considered were financial incentives available to all income levels, financial incentives that target lower-income consumers (i.e., those with incomes in the bottom quartile of median income by state), and system leasing. They found that policies that specifically target lower-income consumers and reduce their adoption costs have increased solar installations in underserved lower-income communities.

Low income-specific financial incentives and options to lease solar panels were the two most effective policies: incentives increased quarterly installations by 0.7 adoptions per 1,000 low- and moderate-income households, and leasing increased quarterly installations by 1.5 adoptions per 1,000 such households. The authors noted that the results depend on the magnitude of the interventions and that the larger effects of leasing relative to incentives may reflect the “relatively small and budget-constrained nature of [low- and middle-income] incentive programmes.”

Although improving, the solar equity gap remains significant. A 2022 study by Barbose et al. found that in 2020, solar adopters typically identified as non-Hispanic white, were primarily English-speaking, had higher education levels, and lived in rural areas, in higher-value homes, and in neighborhoods with higher average credit scores, as Figure 1 below shows.

Meanwhile, a pilot project in Massachusetts is beginning to tackle the state’s leaky gas distribution system in lower-income neighborhoods by repurposing the rights-of-way to roll out geothermal heating and cooling districts. Under the pilot, three gas utilities will replace portions of the network with connected ground-source heat pump systems that harness thermal energy from the earth to heat and cool homes and businesses, as Figure 2 below shows. 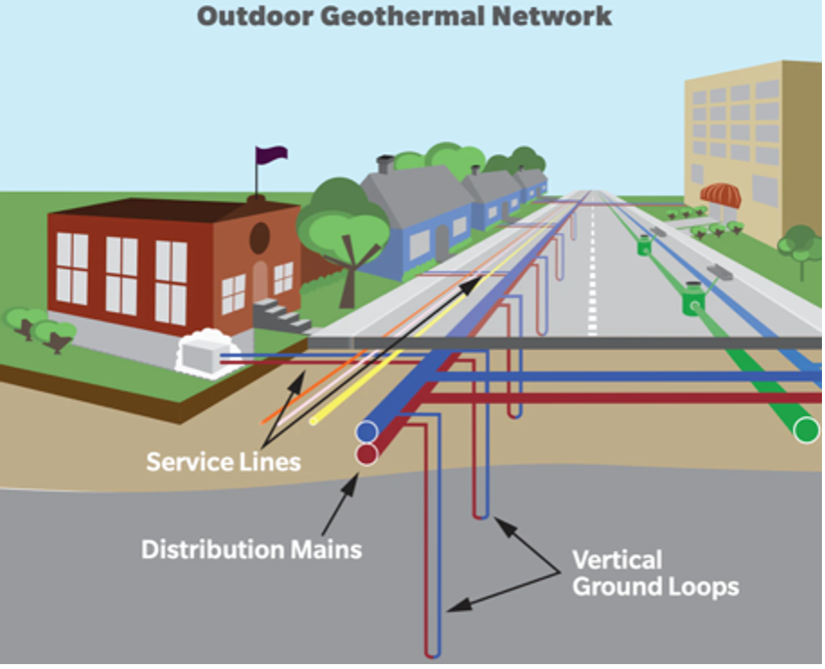 (b) Ground-source heat pump heating and cooling
Figure 2. The “geo-grid” works by (1) installing a series of ground-source heat pumps at homes and businesses; (2) allowing these heat pumps to tap into pipes that carry a mixture of water and antifreeze; and (3) circulating the water-antifreeze mixture in boreholes drilled about 500 feet below the surface (so-called shallow geothermal), where the temperature stays at a fairly constant 50° to 60°F all year. Circulating the fluid below the surface allows the fluid to reach a consistent temperate temperature, around 55°F, which improves the system’s efficiency. At the surface, an electric heat pump uses the temperate fluid to warm buildings during the winter and to cool buildings during the summer. Source: Eversource, “Geothermal Pilot Program for Eastern Massachusetts” (2022), https://www.eversource.com/content/ema-c/business/save-money-energy/clean-energy-options/geothermal-pilot-program.

Such district heating and cooling systems have been used for decades in Europe, though they pose some challenges. The systems often have high up-front costs for drilling boreholes and laying pipes, may require sufficient consumer interest to justify the costs, and may work best in colder climates. It also can take time to coordinate district transitions.

The business model envisioned in Massachusetts helps to overcome such hurdles. Utilities can use existing rights-of-way, they can spread costs across their customer base, and they can recover costs over several years. Whether the model is worth replicating likely will depend on the location and whether the pilot succeeds in providing environmental and energy-efficiency benefits at a reasonable cost that maintains consumer buy-in.

If successful, the climate and energy benefits of the Massachusetts “geo-grid” model could be significant. The connected ground-source heat pumps eliminate methane emissions from gas combustion and offer a low-carbon heating and cooling option. Well-located systems also tend to be more efficient than other options. This is because the fluid used in the system reflects the temperature below the surface, staying around 55°F. This temperate stable temperature helps reduce the heat pump’s electricity use compared to alternatives such as heat pumps that draw outside air.

Connecting several homes and businesses to one network could further increase efficiency. Doing so allows the utility to harness differences in peak heating and cooling needs across the buildings and to share the thermal energy among the buildings, as Figure 3 below shows. As a 2020 NREL report explained, such connected systems can often be smaller than the sum of the buildings’ individual heating and cooling needs, which helps reduce costs. Here, the efficiency gains from the ground-source heat pumps and the district structure could further reduce energy use when the electric grid is especially taxed. 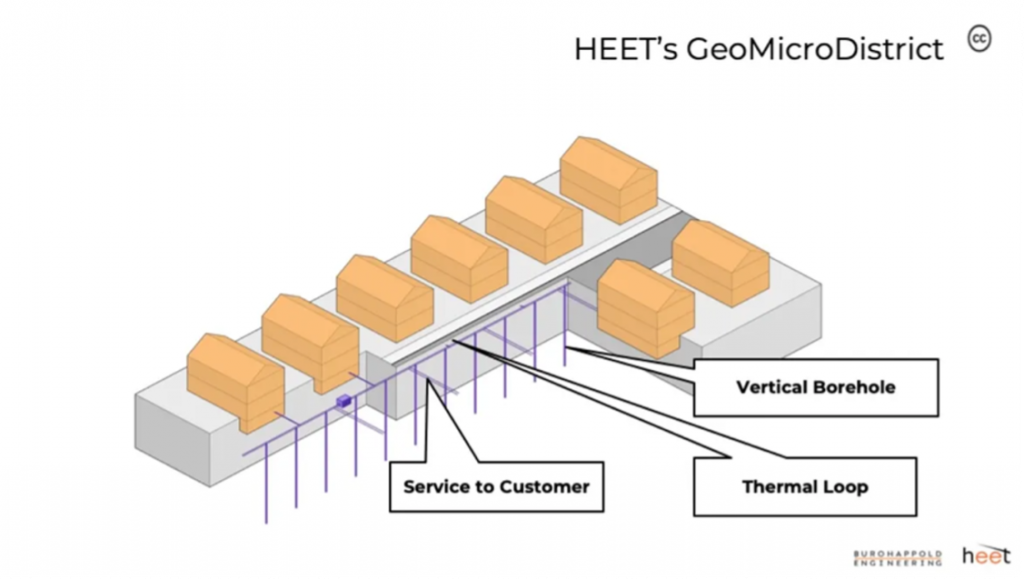 The studies outlined above suggest that the communities that typically lack access to local clean energy resources, like rooftop solar, are also most at risk from extreme heat events and are more likely to live near leaky gas pipes. Recent studies have found that pairing intermittent local renewable energy resources (e.g., solar generation) with geothermal (a weather-independent baseload resource) can cost-effectively integrate fluctuating renewable resources and offer network flexibility. Such hybrid renewable energy systems also could help improve energy security and increase resilience during extreme weather events—especially if such systems can disconnect from the grid (i.e., a microgrid), which would better shield vulnerable communities from grid disruptions.

Perković et al. studied the potential efficiency gains from pairing solar with geothermal heating and cooling systems. Specifically, the authors evaluated whether shallow geothermal reservoirs and local solar generation could cost-effectively work together during heating and cooling seasons to maximize captured solar and geothermal energy, as Figure 4 below shows. Their study of 20 hypothetical houses in Zagreb, Croatia, found that (1) the local solar system reduced costs over the project’s life by replacing more expensive grid electricity, and (2) the hybrid system reduced solar power curtailment.

They further found that excess power from local solar generation could cost-effectively recuperate the geothermal reservoir temperature, which improved seasonal performance and reduced energy consumption of the heat pump. Overall, the levelized cost of electricity for the new hybrid system was similar to operating existing gas heating and importing grid electricity. 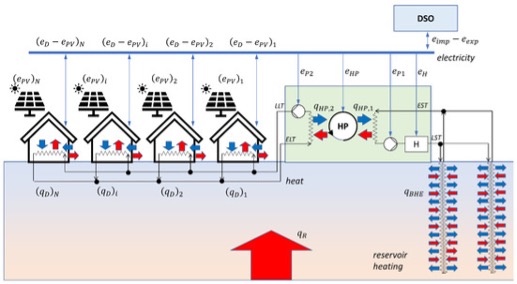 As hybrid systems increase in size or in energy technology diversity, so too does the challenge of running these systems efficiently. Ramsebner et al. evaluated how to effectively transition from a centralized energy system to a distributed, smart, and integrated energy system. The latter type of system deploys local renewable energy resources to meet demand across interconnected energy systems (e.g., electricity, gas, and thermal) and serves diverse energy end uses. The authors found that a major benefit of hybrid systems is the potential to maximize energy output by using excess energy to enhance other energy systems. Such efficiency gains can be achieved in less complex systems and in more complex systems. Less complex systems include the neighborhood solar-plus-district heating/cooling in Perković et al. More complex systems might include those that can produce hydrogen with 100% renewable energy, which may help transition hard-to-decarbonize industrial sectors and cost effectively mitigate battery degradation, as Xu et al. recently found.

Enter your email address to have updates from Energy Innovation delivered to your inbox.
« A Reliable 85 Percent Clean Grid For California Data Explorer Putting Humans Into Climate Models »
We use cookies to provide social media features, analyze our traffic, assist you with contacting us, and help improve your user experience on our website. By clicking “OK” you consent to the use of these types of cookies. However, some system cookies that are needed for this website to work properly have already been set. Learn more in our Privacy Policy.