Energy Innovation partners with the independent nonprofit Aspen Global Change Institute (AGCI) to provide climate and energy research updates. The research synopsis below comes from Mark Bradford, Daniel Kane ,and Darya Watnick of Yale University; Chelsea Carey of Point Blue Conservation Science; Emily Oldfield of Environmental Defense Fund; and Stephen Wood of The Nature Conservancy. A full list of AGCI’s quarterly research updates covering recent climate change research on clean energy pathways is available online at https://www.agci.org/solutions/quarterly-research-reviews. Authors’ note: The views expressed in this piece are those of the authors and do not necessarily reflect those held by Energy Innovation, their institutional affiliations, or AGCI.

Disagreements drive science forward but can generate uncertainty for policy and practice. Soil scientists strongly disagree about whether soil carbon sequestration (SCS) can effectively help to decarbonize the atmosphere. The debate has spread beyond academia with some organizations making the case that meaningful drawdown of carbon through SCS in agricultural soils, achieved through adoption of regenerative agricultural practices, is not viable. Other organizations, by contrast, promote the same practices as necessary for natural climate solutions.

Our recently published article in Nature Sustainability outlines our concerns that this conflicting messaging undermines efforts to restore soils to safeguard human and environmental well-being. We laid out technical research and knowledge supporting soil-based initiatives for climate adaptation of agriculture, provision of clean water, protection of biodiversity, and the sustainability of agricultural communities. We concluded the SCS debate does not undermine the substantive body of science supporting immediate, widespread adoption of practices protecting and restoring soil carbon (Figure 1). 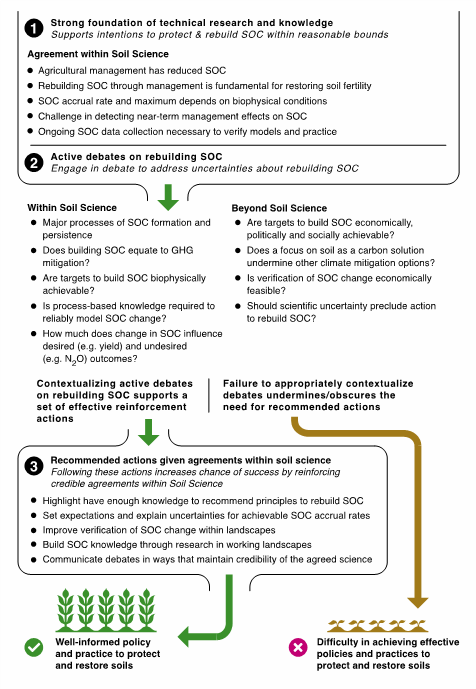 Figure 1. Pathways through which knowledge in soil science can flow to inform soil restoration by rebuilding soil organic carbon (SOC). Debate is critical for addressing uncertainties related to building soil carbon. Yet the way debate is conducted – in particular, with regards to soils as a climate mitigation solution – can undermine the flow of credible and agreed soil science to inform soil restoration. The authors suggest that appropriate contextualization of the debate leads to a set of recommended scientific actions that will advance policies and practices to restore soils on working lands. Source: Bradford et al. 2019.

The answer lies in the strict definition of carbon sequestration, which requires net removal of atmospheric carbon dioxide (CO2). Fertility can be restored by rebuilding organic carbon concentrations in surface soils, yet rebuilding soil carbon in top soils may not equate with sequestration because external inputs like compost may originate outside the farm system, thus representing organic carbon relocation from one place to another. Similarly, in some systems, surface soil carbon gains may be offset by losses deeper in the soil. Yet the benefits of higher carbon in surface soils occur irrespective of net atmospheric drawdown.

A new synthesis (Kane et al. 2021) shows the potential for soil carbon to reduce yield and income losses under drought. Using spatial data for rain-fed corn agriculture in the United States, we find that higher concentrations of surface soil carbon help sustain yields and minimize crop insurance claims in drought years, with the effect of soil carbon most pronounced when droughts are most severe (Figure 2). 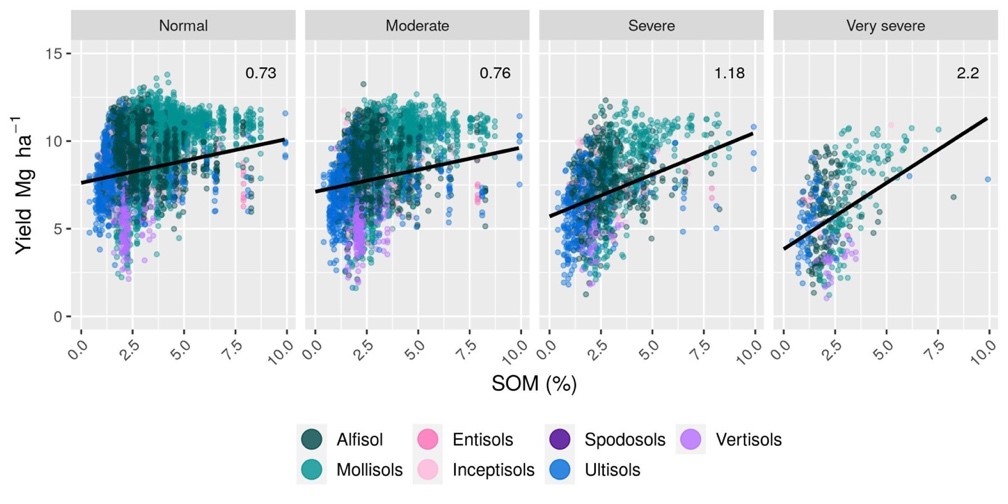 Figure 2. Relationships between corn yield and soil organic matter (SOM) concentration, at the county-level, for rain-fed U.S. agriculture for common soil orders (e.g., mollisols). SOM is used to represent soil organic carbon, where approximately half of SOM is carbon. The increasing steepness of the slope of the relationship between SOM and drought, as you move from moderate to very severe drought (left to right across the panels), underscores the increasing adaptation value of higher SOM as drought severity intensifies. Drought severity is relative to non-drought years for the time period of the analysis (2000–2016). Source: Kane et al. 2021.

Climate projections include increasingly frequent and severe droughts. The Kane et al. findings support the intent of the “4 per 1000” initiative launched at the 2015 United Nations climate change conference to protect and rebuild soil carbon. The initiative includes three pillars: intensify climate adaptation of agriculture, improve food security, and mitigate carbon. The third pillar of climate change mitigation through SCS, however, became a focal point of scientific disagreement around the potential of SCS to meaningfully contribute to carbon drawdown.

The 4 per 1000 initiative was named and originally communicated around the substance of this third pillar, that an annual growth rate of 0.4 percent in the carbon stock of surface soils would significantly reduce atmospheric CO2 concentrations. The target was interpreted literally, rather than as an illustrative example of how much carbon soils hold and might sequester. Whatever the original intention, the “4 per 1000” branding spurred polarizing and acerbic academic debate on whether enough carbon can be sequestered in soils at a meaningful rate to mitigate climate change.

The SCS debate is important and stems from measurement challenges, paucity of large-scale verifiable observations of management effects, potential unintended consequences such as increases in nitrous oxide (N2O) emissions, theoretical advances in our understanding of SCS mechanisms, and feasibility of widespread producer adoption (for example, see Amundson and Biardeau 2018). Soil carbon initiatives are wrestling with these real challenges. We note that naysayers about SCS are on no firmer footing than those championing it for carbon drawdown.

Soil as a common good

Regardless of where you stand on the SCS debate, the need to protect and restore soils remains an imperative. Over the last few years, notions of soil fertility and quality have developed into ones of soil health and now soil security. In their recent perspective in Nature Reviews Earth & Environment, Lehmann and colleagues document how the framings have evolved to expand the scale, ecosystem services, and stakeholders dependent on securing soils as a natural resource (Figure 3). Lehmann et al. clarify the need to view soil as a common good, just like freshwater and air, to which all people have rights. 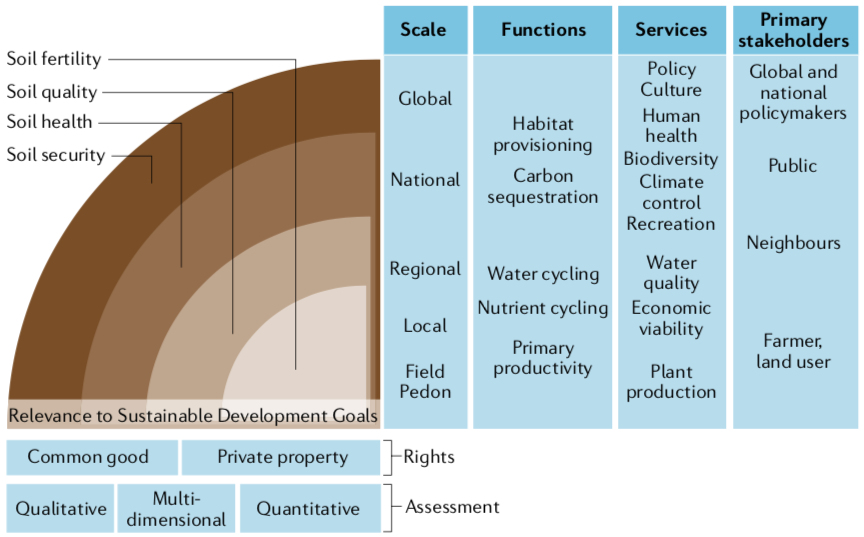 Figure 3. Evolving framings of soils as a natural resource, from the most historical framing of fertility to the most recent framing of security (left side of figure). The evolving concepts increase the spatial scale and number of functions, ecosystem services, and stakeholders (right side of the figure) included in the framing. The concepts also differ in the view of soil rights and assessments (bottom left of figure). Source: Lehmann et al. 2020.

Another article by Sanderman and colleagues published in the Proceedings of the National Academy of Sciences, USA confirms that all soils, from the most marginal to fertile, are vulnerable to soil carbon losses. In agricultural landscapes, including cropland, grazing land, and plantation forestry, soil carbon losses via erosion and decomposition have generally exceeded formation rates of soil carbon from plant inputs (Figure 4). Losses associated with these land uses are substantive globally, with a mean estimate to 2-m depth of 133 Pg-carbon lost since adoption of agriculture (~12,000 years before present), equivalent to ~63 parts per million of atmospheric CO2. Just as with many other environment issues, the rate of loss has been much greater over recent decades than it was when human land use was more diffuse and less intense on both a per capita and cumulative basis. The need for action on soils cannot be overstated. 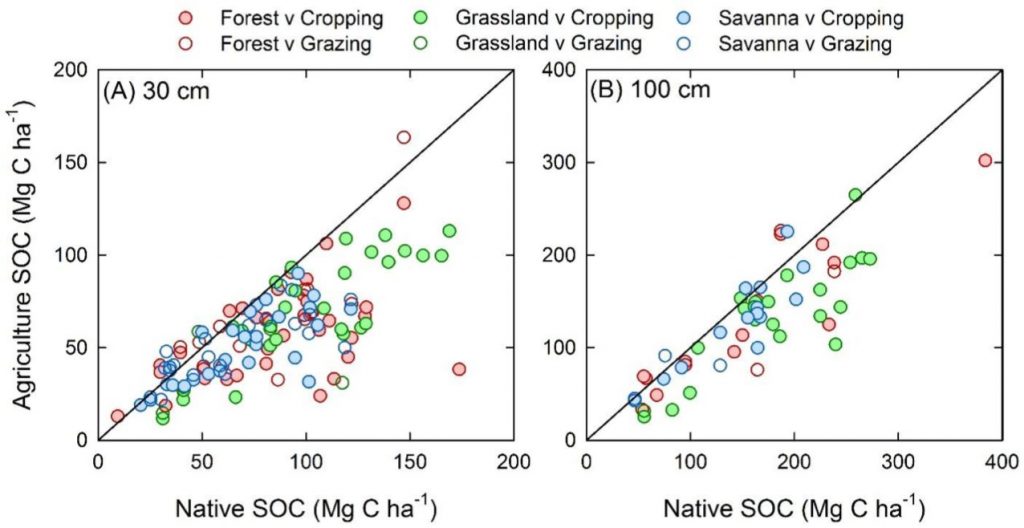 Now is the time to go beyond soil science to draw on knowledge and cutting-edge research in ecosystem, climate, and carbon-cycle science. Those fields open up new thinking about how measurement and verification (MRV) might support carbon markets based on adoption of regenerative and climate-smart agricultural practices. Questions tackled by scientists in those fields deal directly with how to scale from local impact to regional, continental, and global consequences for carbon budgets.

Insights from such work suggest that whereas it might be hard to reliably quantify changing carbon stocks at local scales, such as a farm or field, confidence in regional-scale estimates of mean change can be achieved because the influence of “local uncertainty” is minimized. Major businesses, for example, might then be able to build confidence that widespread adoption of agricultural practices that rebuild soil carbon might help them reduce Scope 3 emissions (e.g., emissions from agriculture and land use change, which typically constitute the majority of emissions from food and beverage companies), regardless of whether verification of SCS for any one farm is feasible.

Adoption of lessons learned in these “macrosystem science” fields would expand the repertoire of approaches currently being considered in soil carbon MRV protocols. Current protocols rely on a single biogeochemical model and/or technological advances directly measuring soil carbon. Confidence in regional-scale projections can be generated through convergence of predictions from multiple biogeochemical models, given recognition that model projections at local scales of time and space are subject to many uncertainties. Because uncertainties differ model to model, “multi-model” approaches capture a wide range of knowns and unknowns, bolstering confidence by including them in the aggregate prediction. If MRV protocols expand to consider metrics representative of broader soil health goals, such as yield resilience under drought (Figure 2), broader environmental and societal aims of soil security might be verified even if SCS could not be reliably measured at the farm scale.

In their 2019 Geoderma paper, Gonzalez Lago and colleagues argued to re-politicize soils. They described an entrenched soil policy vacuum where, despite international treaties and conventions, soil degradation concerns had not translated to national or sub-national environmental policies that facilitate effective action. They argued an immediate need exists for a narrative aligned with policymakers’ perceptions of the importance of soils to society, one which would be effective at generating societal attention and traction.

It seems their call has been answered. Major food businesses such as General Mills are advancing the adoption of regenerative practices in an effort to protect and build healthy soils to strengthen agricultural ecosystems and rural communities, and several major nonprofits have initiated or bolstered efforts related to soil conservation. Simultaneously, rapid development and buy-in from major business and policy is underway, with the possibility that the U.S. Department of Agriculture will establish a Carbon Bank under the Biden administration, as part of efforts to generate climate-smart agriculture.

Twenty years ago, the conversation centered on soil quality (as opposed to health or security), and we were on the verge of adopting major soil carbon bank initiatives. Those of us who remember those discussions are uneasy. Government- and business-driven action on soils fell away when markets for SCS failed to establish. To avoid repeating history while still harnessing significant, new momentum, public and private sector support are needed to prioritize healthy soils as the foundation for climate adaptation of agriculture and food security, even if ultimately divorced from SCS.

Many soil scientists draw on the words of President Franklin D. Roosevelt when he signed a 1936 act to conserve the land’s natural resources: “The history of every Nation is eventually written in the way in which it cares for its soil.” With globalization, these words must be updated from nation to planet. The impacts of accelerating rates of soil degradation will be compounded by the increasing severity and frequency of extreme weather events. Without concerted action to protect and rebuild agricultural soil carbon, decreased food security will be followed by land degradation, economic migration, and instability in national security. Paying farmers only for the carbon they sequester therefore seems naive. Protecting and restoring agricultural soil carbon is about food security and soil conservation writ large, and this should be a primary goal of agricultural production and supply chains. Soil scientists should continue to think about how to most appropriately contextualize active debates and uncertainties, so we can clearly communicate recommendations based on agreements within soil science (Figure 1). Given the momentum in the soil carbon space, the need for clear communication is more important than ever and will help ensure policy, markets, and management actions are well-informed and successful.