A version of this article was originally published on November 29, 2017 on Greentech Media.

Resilience may be the most trending topic in today’s electricity sector.  The Department of Energy’s (DOE) report on baseload retirements impacts and subsequent Notice of Proposed Rulemaking (NOPR) to subsidize baseload units for alleged resilience begs three questions: Does 90-days of onsite fuel improve resilience (two America’s Power Plan experts say no), and more fundamentally, what is resilience and how can it be measured?

Resilience is increasingly a focus for state-level utility stakeholders, particularly in the context of grid modernization.  At NARUC’s 2017 Annual Meeting, three hours of subcommittee meetings discussed grid resilience, and a general session, ominously titled “Mother Nature, the Ultimate Disruptor,” addressed resilience improvement efforts across critical infrastructure. So taking stock of what we know, and what we don’t, about resilience is useful before approving large-scale investments or payments to enhance grid resilience that may exacerbate the problem.

How resilience differs from reliability

Reliability and resilience are intertwined and often conflated. NERC, which has FERC-delegated authority under the Energy Policy Act of 2005 to create and enforce reliability standards for electric utilities and grid operators, defines reliability as a combination of sufficient resources to meet demand (adequacy) and the ability to withstand disturbances (security).  To hold reliability authorities accountable, NERC monitors the ability of reliability coordinators to respond to generation or transmission outages. For example, NERC penalizes excessive system frequency and voltage deviations, two leading indicators that system operators may have inadequate resources to respond quickly to unforeseen supply and demand imbalances.

A common, accepted adequacy measure is the percentage of capacity in excess of projected or historical peak demand for that system, although precise adequacy standards differ between reliability regions, subject to NERC approval. Adequacy also includes essential reliability services like frequency and voltage support, and will increasingly require a focus on flexibility as more wind and solar come online.

Security is harder to measure, as it reflects preparedness to endure uncertain external forces.  Modeling and thought exercises help, but the impacts of low-probability, high-impact events remain difficult to predict.  NERC is on the case, promulgating cyber security, emergency preparedness and operations, and physical security standards to ensure grid operators and utilities are prepared for attacks or blackouts.

The impacts of inadequate resources or security against anything from hurricanes to squirrels to cyberattacks can be measured in terms of outages.

Resilience is a more expansive concept than reliability, encompassing consequences to the electricity system and other critical infrastructure from increasingly likely high-impact external events.  Reliability metrics like SAIDI and SAIFI generally make exceptions for extreme weather events when measuring utility performance – whereas resilience is often articulated as a grid attribute that improves response to such events.

Source: National Academies of Sciences, Engineering, and Medicine, “Enhancing the Resilience of the Nation’s Electricity System,” (2017) 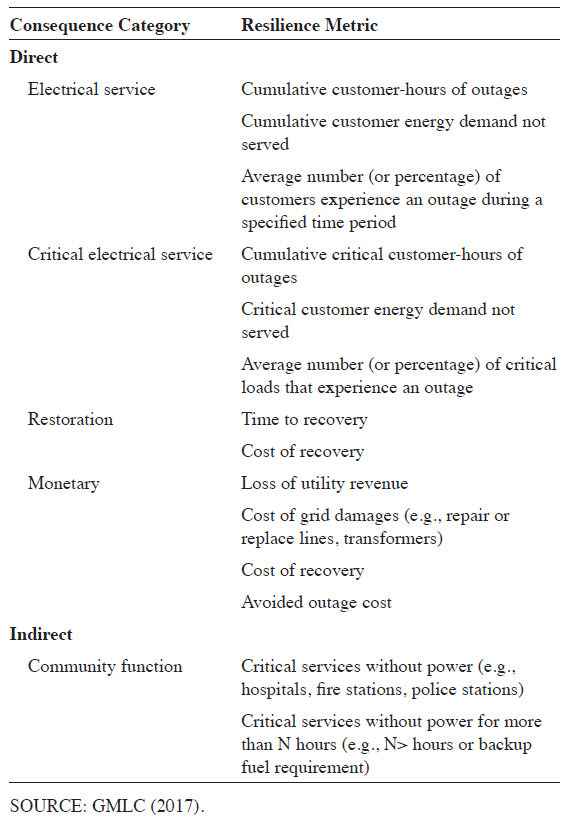 Resilience is also additive to reliability around system recovery, recognizing that low-probability, high impact events will inevitably cause outages – the key is investing in infrastructure that reduces outage duration, cost, and impact on critical services.  New technologies that increase system awareness and automation, particularly on the transmission and distribution system, allow rapid islanding of downed circuits before failures cascade across the distribution system, rerouting power while isolating reliability issues and hardening the grid against new threats.

Despite new research into resilience, reliability regulators (particularly NERC) already perform most of the work needed to ensure the grid, particularly the bulk power system, is resilient.  Resilience’s additive elements are few but important, and fall to specific applications like severe weather events, continued service for critical infrastructure, and improved recovery through grid awareness.  Attempts to improve resilience through rulemaking that focuses on fuel security or resource adequacy miss the point – these service elements have been improving steadily for years and can be procured in a technology-neutral way, with an able-bodied NERC at the helm.

Resilience through the energy transition

Economic forces and policy priorities are driving a transition to a cleaner, more variable power mix. Meanwhile customers are becoming more participatory.  Each of these transitions affects resilience in different ways.

Damage to the distribution system caused the vast majority of outages over the last five years.  Conceptually, the availability of fuel to power plants could also be a cause, but data show it is a very unlikely cause of outages – only 0.0007% of outages were caused by fuel security issues. 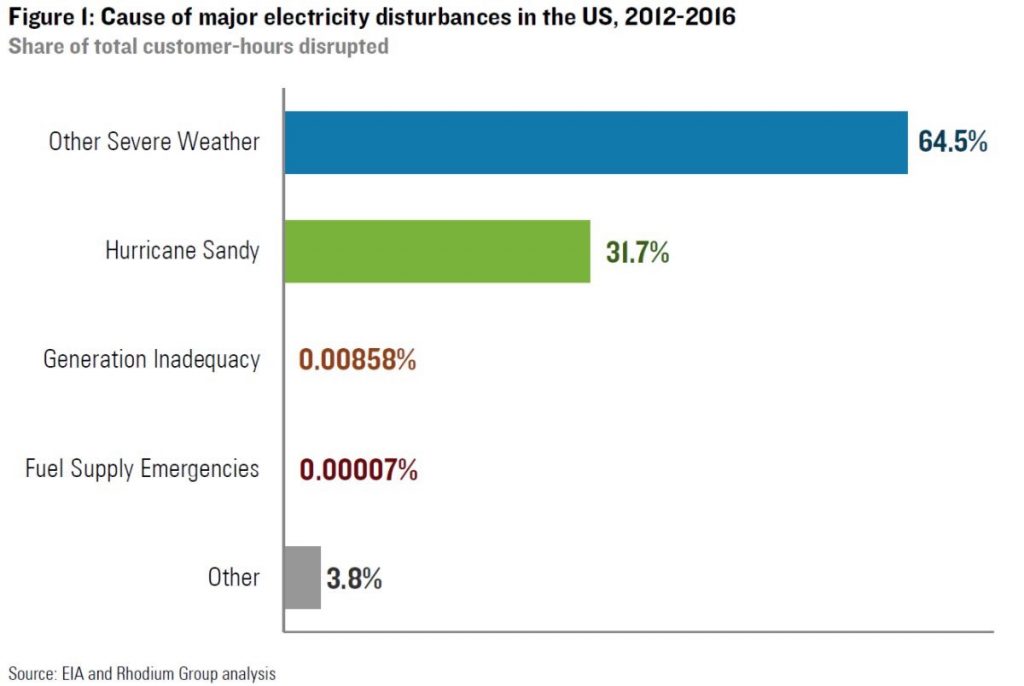 Still, the transition from fuel-based power to higher shares of renewable energy affects bulk power system reliability and resilience in both positive and negative ways.

For human-caused events such as cyber or physical attacks, renewables reduce fuel supply risk.  Coal relies on rail delivery, which is subject to physical attacks, since roughly 40 percent of U.S. coal comes from Wyoming’s Powder River Basin, nearly all via the 103-mile Joint Line rail corridor.  Nuclear plant destruction during operations could be potentially catastrophic.  Natural gas pipelines are vulnerable to cyber and physical attacks, though some delivery will continue if one line is disrupted.

Converting to renewables avoids these fuel security issues; however, cost-effective integration of a high share of utility-scale renewables depends on increasing transmission system capacity. Taking down one or two lines could disrupt the system’s ability to balance, either on a regional or interconnection-wide basis, hampering reliability until threats were addressed.

Natural events, particularly weather-related events, must also be considered.  Hydroelectric generation is drought-vulnerable, while cloud cover from intense storms and hurricanes can threaten solar availability.  Extreme winds may force partial wind curtailment for short periods of time.  As during the 2014 Polar Vortex, coal piles on-hand can freeze, and co-dependence on natural gas for heating and generation during extreme cold can threaten resource availability.  Prolonged heat waves can leave nuclear unusable if cooling water is too hot.

Combining inverter-based storage and generation may be more effective than baseload at performing a black start during outage recovery, since spinning masses would not need to be synchronized, though we lack practical examples of restarting with very low spinning mass.  As Amory Lovins recently wrote, nuclear plant performance restarting after the 2003 Northeast Blackout was abysmal, taking weeks to come back online at full capacity.

Distribution systems increasingly rely on distributed, small-scale devices to provide resilience services that complement centralized generation and contribute to a smarter, more connected, and more automated distribution system.  Connected devices can identify and isolate grid threats while preventing cascading failures and improving restoration, but may increase the risk of more widespread cyberattacks.  Local generation can add resilience to natural events – the Borrego Springs microgrid pilot in SDG&E’s territory allows a remote community to disconnect from the larger grid and maintain critical services during wildfire and high wind seasons which threaten a critical transmission line from generation closer to load centers on the coast. 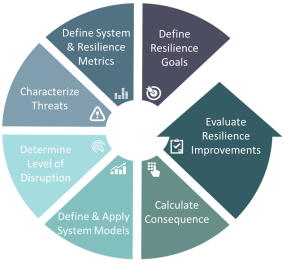 “Getting the most out of grid modernization” is a five-step framework from America’s Power Plan to help policymakers turn metrics into action and hold utilities accountable for delivering resilience and other customer value.

All of this takes place in the context of a dramatic energy transition adding connected distributed devices and variable fuel-free generators.  When assessing the cost and reliability of future high-renewables systems, resilience attributes and metrics can figure into the mix if they go beyond reliability once developed.  Benefits should be incorporated into plans where identified, and where gaps are found, utilities and other stakeholders should identify technology-neutral attributes such as flexibility to shore up resilience.

« Hal Harvey’s Insights And Updates – The Real Deal In Abating Climate Change: Four Zeros Trending Topics – A Year-End Update On Electricity Policy From The Field »
We use cookies to provide social media features, analyze our traffic, assist you with contacting us, and help improve your user experience on our website. By clicking “OK” you consent to the use of these types of cookies. However, some system cookies that are needed for this website to work properly have already been set. Learn more in our Privacy Policy.