“Today’s results underline the California carbon market’s core strength – fundamentally strong policy design. This is especially a triumph for the price floor at auction that the California Air Resources Board established: When demand for allowances fell in previous auctions due to below-expected emissions and future authority uncertainty, the auction price floor held back 143 million allowances, rebalancing supply and demand and helping to stabilize the market. Compare this to other carbon markets, where prices have spiraled downward relentlessly with oversupply. In addition to a stable price that is higher than any other major program, the price floor delivers additional greenhouse gas benefits and local air quality benefits beyond those that would have accrued under the original cap levels.”

“Market fundamentals dictate that the trend of relatively stronger auction results should continue. There is little chance the very low levels of auction demand evidenced over the past year will be repeated in the final two auctions of 2017. We estimate demand at the next two auctions will have to average at least 65-70 percent, due to near-term needs with the second compliance period coming to an end this year.”

“Separate analytical work from Energy Innovation points to a continuation of this trend over the longer run as well. Through 2020, auction sales will need to average 70-80 percent based on the simple math of emitter compliance needs, generating $7.5-8.5 billion for California’s Greenhouse Gas Reduction Fund (including the most recent auction).”

“These results should reassure legislators who appreciate investments through the Greenhouse Gas Reduction Fund, but grew concerned at the recent lackluster revenue results. Reforms can make the program stronger, and are needed to properly address concerns that the program is delivering a fair share of benefits to disadvantaged communities. That said, fundamentally, it is a strong program worth building upon.”

1. What Happened At The Auction?

Permit demand surged at the May auction, in line with our prediction: 100 percent of current vintage allowances sold at the auction price of $13.80, 23 cents above the price floor. The auction raised about $511 million for the state’s Greenhouse Gas Reduction Fund.

In addition to sale of these current vintage allowances, 22 percent of allowances for use in 2020 were purchased through the state “advance auction”. Considerable variability has occurred in these advance auction results, so these results are not particularly significant.

After a string of lower allowance sales in three of the last four auctions, with the last one clocking in at 18 percent, fundamentals—both policy and market—flipped the dynamic.

Policy Fundamentals: In a triumph of policy design, the program’s auction price floor held back 143 million allowances in the last year and a half. In most international programs, prices would have instead fallen to laughable levels when confronted by such a surplus of allowances. The California-Quebec price floor maintains the most robust price of any cap-and-trade program, while automatically recalibrating to account for oversupply. This reduces greenhouse gas emissions below the level of the initial cap, while also delivering additional local air quality gains. 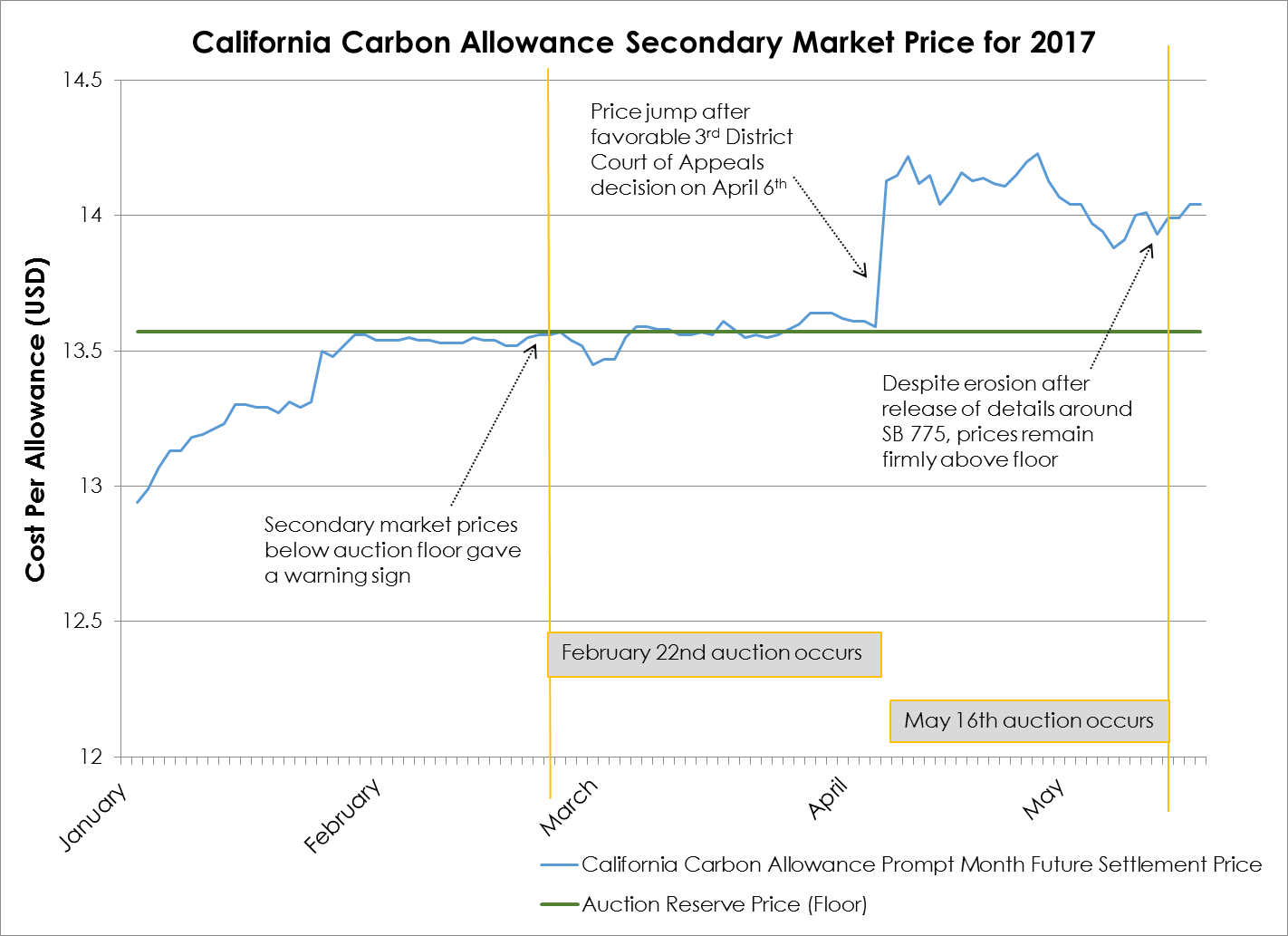 The added legal certainty of the favorable decision from the Third Court of Appeals in early April was another factor providing upward pressure on auction demand.

What It Means For The Sacramento Debate

These results strengthen the hand of those favoring incremental reforms to cap-and-trade (including the Executive Branch) as compared to some pushing fundamental changes. Governor Brown is working for an extension of cap-and-trade authority. His speech to the Navigating the American Carbon World Conference acknowledged that the program has its problems. On cap-and-trade policy, he looks for technical guidance from California Air Resources Board Chair Mary Nichols. While Chair Nichols has said that improvements are conceivable, she emphasizes that the program is fundamentally sound.

Enter your email address to have updates from Energy Innovation delivered to your inbox.
« Trending Topics – Secretary Perry, We Have Some Questions Too Hal Harvey’s Insights and Updates – California cap-and-trade 2.0 »
We use cookies to provide social media features, analyze our traffic, assist you with contacting us, and help improve your user experience on our website. By clicking “OK” you consent to the use of these types of cookies. However, some system cookies that are needed for this website to work properly have already been set. Learn more in our Privacy Policy.