A version of this article was originally published on June 24, 2016 on CleanTechnica.

New York’s Reforming the Energy Vision (REV) initiative is transforming how utility stakeholders view the power sector’s future, but for the first time polling has revealed widespread support from consumers themselves [1] Evidence of strongly positive attitudes toward clean energy in general, and REV in particular has major implications for utilities and regulators.

Voters not only showed they care about global warming and climate change, but also support increasing renewable energy generation and expanding control over their own energy consumption – bolstering the case for bold regulatory reform to increase customer participation in grid management currently underway New York State.

The poll will add a new dimension to the REV record. “New Yorkers support keeping the state’s renewable energy and greenhouse gas emission goals as drivers for a new electricity delivery framework,” said Cara Lee, a Senior Conservation Manager with The Nature Conservancy, which conducted the bipartisan poll in early 2016. “Additionally, consumers have demonstrated their willingness to engage in their own energy choices and make the necessary changes to ensure the success of New York’s REV program.”

These findings expand the data portrait, bolstering conclusions drawn from dozens of public meetings held in cities across the state by Public Service Commission staff, and from filed public comments in the REV proceeding.

The polling teams, Fairbank, Maslin, Maulin, Metz & Associates and Public Opinion Strategies summarized their findings: “Voters clearly understand the threats posed by global warming and find them sufficient motivation to act to increase the share of clean energy used in the state, as well as to reduce the amount of energy they use personally.” They also found New Yorkers are interested in learning about and adopting new technologies and investing in clean energy to generate cost savings and environmental benefits.

Telephone polling and qualitative online interviews found global warming and climate change ranked fourth and fifth among New York voters’ list of top worries, and revealed voters strongly support clean power initiatives. Voters especially want more choice and control over energy usage, and expressed interest in adopting new technologies to enable those choices. In fact, 90% of New Yorkers expressed support for REV after hearing a description of the program [2] – 52% of them “strongly” in support – while fewer than 10% opposed it.

Support for REV was widespread across demographics, with 92% of women and 85% of men, 88% of white voters and 95% of voters of color, 91% of New York City dwellers, 90% of NYC suburbanites, and 86% across the rest of the state expressing a positive view. Similarly, among political affiliations, 92% of Democrats, 89% of independents, and 83% of Republicans expressed support. 87% of those who identified themselves as the primary utility bill payer voiced support for REV policies.

Voters also showed robust support across demographics for the Clean Energy Standard, the regulatory program implementing Governor Andrew M. Cuomo’s objective of reaching 50% of the state’s electric generation from renewable sources by the year 2030 (the 50-by-30 target). 86% of men and 92% of women; 91% of New York City voters, 88% in New York City’s suburbs, and 89% across the state supported the goal, crossing political lines. The 50-by-30 goal was supported by Democrats (93%), independents (88%) and Republicans (84%), while 96% of liberal voters were for it (85% “strongly”), as were 92% of independents and 81% of conservatives.

More than half identify global warming as very serious, and 23% ranked it “extremely serious,” after crime, the economy, and healthcare costs. Voters also feel strongly about the importance of New York moving to a greater proportion of clean energy sources. On average, voters believed New York currently enjoyed a roughly 25% clean energy portfolio (the actual figure is lower), and they expressed a preference for moving to far greater clean energy sources. A majority would choose to have 71-100% come from clean, renewable sources.

Support for increased use of energy sources 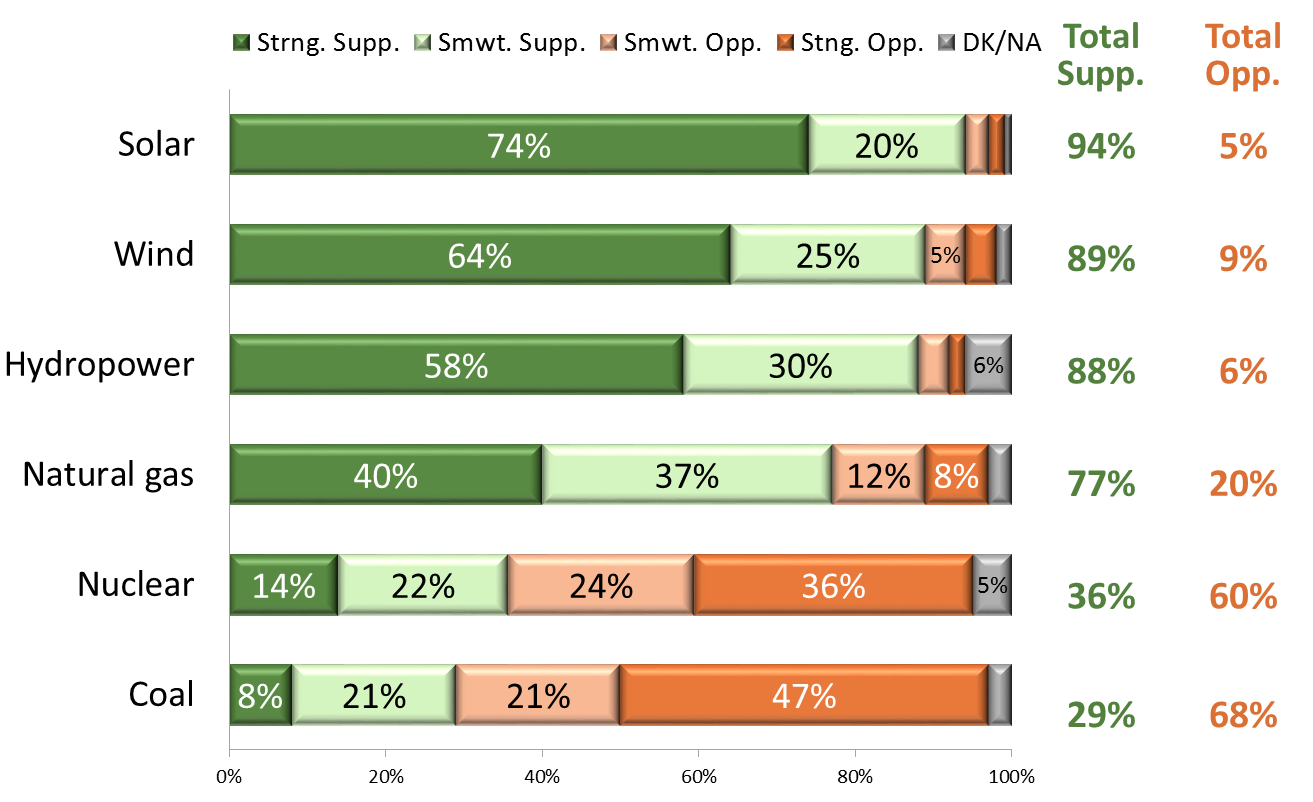 The pollsters found “near-universal” support for individual elements of the state’s clean-energy transition. Almost all (95%) are in favor of moving to a “smart” electricity grid and three-quarters (76%) strongly support it. Most (91%) supported both providing incentives for the development of rooftop solar and community choice aggregation. In sum, majorities “strongly” support each element of the energy transition strategy.

Most New Yorkers also respond very favorably to technologies empowering them to cut down on energy use, after hearing explanations of these technologies. These measures included demand response (88% liked it), smart meters (87%) and smart thermostats (75%).

Support for technology employed in a clean energy transition

New Yorkers weighed various messages in support of REV: what they found most persuasive was the threat of climate change and its impact on future generations (84%). They also strongly responded to messages about protecting the environment while saving money in the long run (82%); and adoption of new clean energy technologies to empower consumers to address climate change (80%).

Most voters (64%) indicated they think a great deal about the effects of their own actions on climate change in their everyday lives. However, they did not connect those thoughts to their own electric usage – most of those polled (54%) said they currently gave little thought to their electric bills beyond the bottom line. Many don’t focus on their electric usage (26%) or indicated they could do more to reduce their own energy usage (45%), while a significant minority (28%) concluded they were doing all they could to reduce it. Overall, 71% of New York voters represent a significant potential for demand reduction initiatives.

Personal attitudes toward energy use 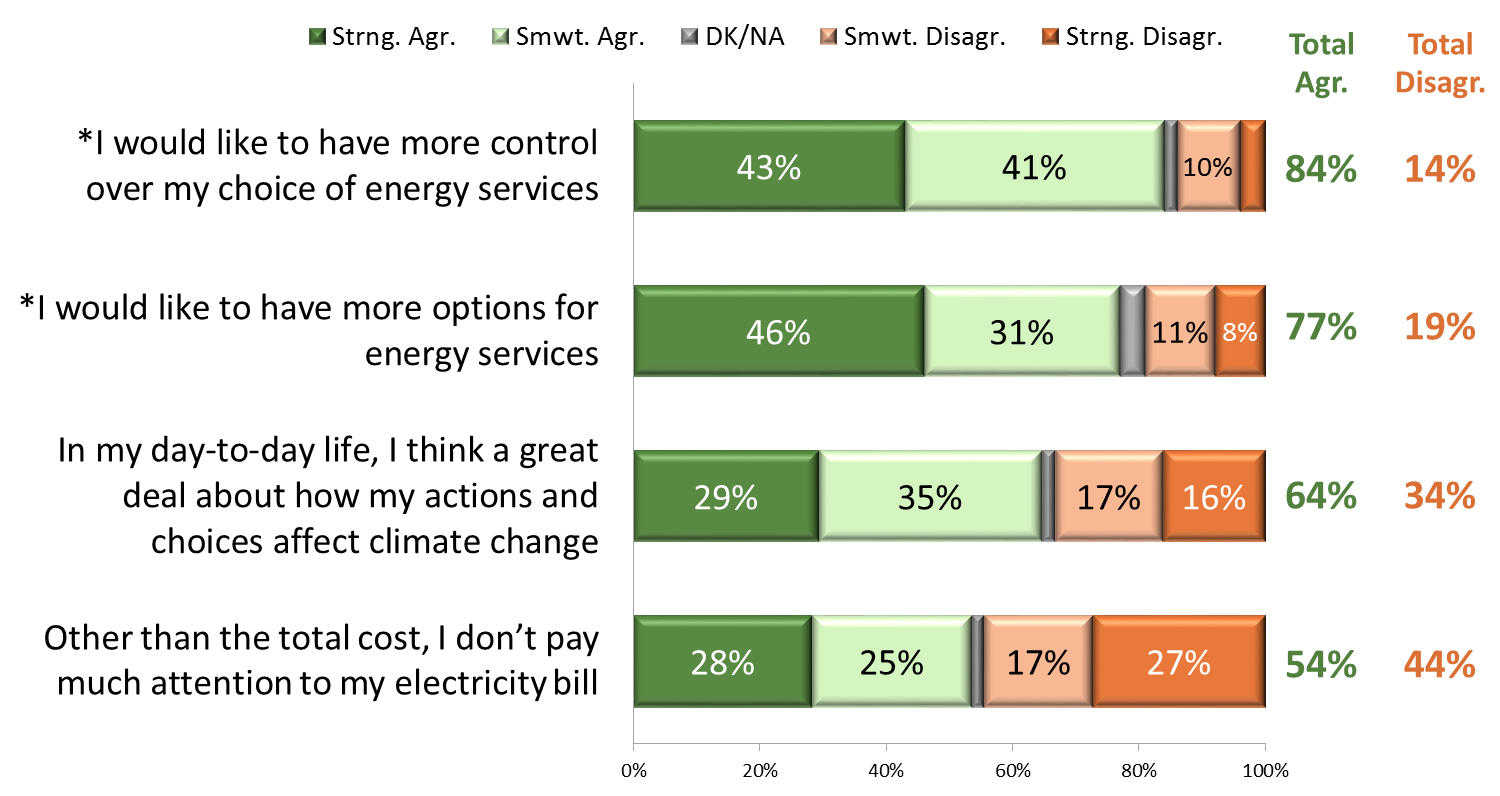 Those polled expressed strong interest in both reducing and having control over their own energy usage. More than two in five strongly agree that they would like more control over their energy sources and more options for energy services. These responses indicate customer potential to engage with new measures for managing energy usage. In a significant statement, a substantial majority express willingness to reduce usage during peak demand (69%) and peak price periods (68%) and would opt into a program to obtain electricity from renewable sources from their utility (86%).

Moreover, 80% of New Yorkers are either already taking steps toward meeting the state’s energy efficiency goals or are willing to take those steps, reducing demand on the system. Two in five have upgraded their appliances to energy-efficient models or improved the energy efficiency of the home itself.

The response to potential bill impacts

New Yorkers were also asked whether they would support or oppose REV if implementation required a small increase in utility bills in the short term. Under these circumstances, 30% continue strong support and 42% continue some support. Half were asked the same question, but with the proviso that over the long term, REV would lower electricity bills. Those voters responded even more favorably, with 44% continuing strong support and 36% indicating some support.

What do these results mean for utilities and regulators?

For utilities, these results demonstrate the potential to mobilize significant numbers of New Yorkers to adopt clean energy measures to manage and reduce electric usage and switch to renewable energy sources as they become available.

Voters’ willingness to carry some costs associated with this new energy future is encouraging for sustained public support – particularly if prices rise in the short term – but this insurance may not be necessary. A recent update to the National Renewable Energy Laboratory’s Renewable Electricity Futures study indicates 80% renewables can be attained by 2050 at almost no increased cost relative to business as usual.

The poll also highlights the need for utilities to provide residential customers the technology and education to reduce their energy usage, and the opportunities to choose renewable energy resources.

A majority of customers are eager for more tools to reduce their energy consumption and provide demand-side flexibility. Utilities may face significant risks if they ignore these new demands and opportunities. Customers demand choice, and if their utilities can’t provide it, customers will eventually find other providers who will.

For regulators, the lesson is clear – customers want the regulatory framework and technology to manage their demand, from time-varying rates to in-home automation. If these customer demands for much higher levels of clean energy hold, they threaten the prudence of investments in new gas plants or upgrades to existing fossil plants. Regulators need to reconsider the meaning of basic utility service, of safe and adequate service, and of the public interest, in this new reality.

[1] The poll methodology involved 801 telephone interviews with randomly selected New York voters who are likely to participate in the November 2016 election. The margin of sampling error is +/-3.5% at the 95% confidence level; margins of error for population subgroups within each sample will be higher. Results were also informed by qualitative online interviews with registered voters across New York State.

[2] Pollsters described REV this way: “New York State is proposing to modernize the electrical grid to reduce costs, increase reliability and reduce greenhouse gas emissions. To do so, New York State could require electric utilities to offer consumers options that achieve these objectives – like generating more electricity from clean and renewable sources, and providing new technologies to allow consumers to better understand and manage their use of electricity.”