A version of this article was originally published on June 10, 2016 on Greentech Media.

2011 was a challenging year for the Electric Reliability Council of Texas (ERCOT), the state’s independent system operator. Winter cold snaps and unusually hot summer temperatures pushed the system to the edge and required bringing some mothballed plants out of retirement under special contracts covering variable costs. This situation triggered several years of debate at the Public Utility Commission of Texas (PUCT) on how best to guarantee long-term grid reliability, and decide whether to supplement Texas’ energy-only market with a forward capacity market similar to those in the Eastern Interconnection.

At issue were energy market revenues seen as inadequate to stimulate new generation while planning documents predicted record low reserve margins. Texans for Reliable Power, an advocacy group representing some of the biggest generating companies in the state, even took out full-page ads in early 2014 depicting Texas in the dark from blackouts.

In the end, in 2014 Texas regulators decided against a standard forward capacity market for an energy-only market design with an operational reserve demand curve (ORDC is a day-ahead, real time mechanism to signal looming scarcity in the energy market and provide extra revenue for generating capacity) and a higher wholesale energy price cap of $9,000 per megawatt-hour (MWh). 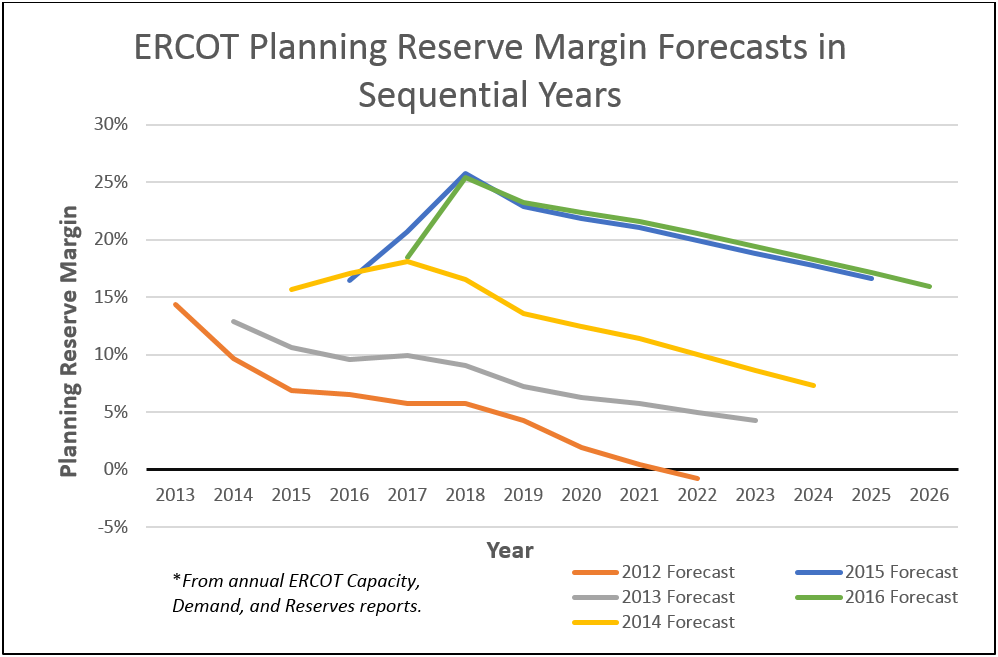 Looking to 2022, the forecasted reserve margin rises from -0.8% to 20.5% (ERCOT’s target is 13.75%) indicating a rapidly improving reliability outlook from 2012 to 2015, despite PUC passing on a forward capacity market. So how is this possible?

Dropping load forecasts have significantly decreased the likelihood of energy scarcity over the next decade. In fact, a recent lawsuit brought against ERCOT by Panda Power Funds and various affiliates contends they were fraudulently misled into investing $2.2 billion in new combined-cycle gas power plants by over-optimistic ERCOT forecasts in 2011-2012.

The chart below shows changes from ERCOT’s 2012 Capacity, Demand and Reserve (CDR) forecast for 2022, with increases (or decreases) in CDR forecasts for peak summer resources in subsequent years broken up by fuel types. 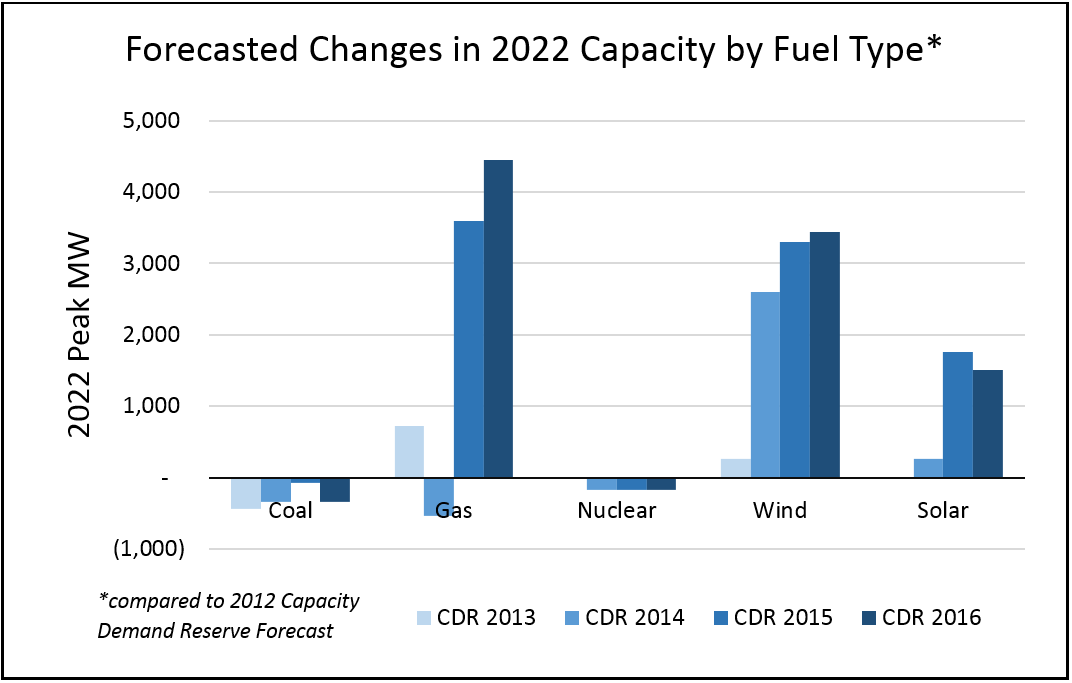 The first trend is easily understood – technology prices for solar and wind have dropped so steeply they have become increasingly competitive (U.S. solar photovoltaic prices have dropped roughly 50% since 2012; wind prices 40%), even in a low wholesale price environment. Proactive transmission policy has also facilitated a rapid rise in wind generation that is likely to continue.

The second trend, future gas capacity additions, is more perplexing. The power generation industry, like many commodities industries, is a boom-bust market with ample available risk hedging, so big swings in expected future capacity aren’t unexpected. However, it is strange to see combined cycle gas turbine (CCGTs) building boom when current revenue recovery from the energy markets is at an all-time low –bringing us back to the billions in customer savings.

A key metric to understand why developers choose to build a new plant in a power market like Texas is the Cost of New Entry (CONE). CONE is basically net revenue (measured in $/KW-year) that a generation company would need to make every year from a plant to cover fixed costs and pay off investors. Net revenue is annual revenue from energy-market sales, along with other ancillary services payments, minus money spent on fuel and other variable expenses.

Established wholesale electricity market design dictates that if long-term market revenues are below CONE, investors will not fund new generation. According to the ERCOT independent market monitor’s “2014 State of the Market Report,” a new combined-cycle plant in Texas has a CONE between $110-$125 per KW-year, while net revenues for a generic CCGT plant in 2014 were around $57 per KW-year. Hence, combined-cycle gas plants seeking to satisfy their investors face a revenue gap of around $60/KW-year.

Capacity markets target closing the revenue gap for generators, but if all 65 GW of dispatchable generation in ERCOT was getting this type of payment ($60 per KW-year) in order to incentivize the right amount of new generation to maintain proper reserve margins, it would equal around $3.9 billion for 2014 and about $5.2 billion for 2015.

With so much money at stake, it is easy to see why some Texas policymakers were not so eager to create a new forward capacity market. So far, Texas’ ORDC mechanism has provided more like $1-2 per KW-year to generating companies, perhaps just a sign from today’s energy market that shortages are not on the planning horizon. Even if the PUCT is just delaying the inevitable for a few years, prudence has shown quite a dividend even while reserve margins have improved.

Why the new resources?

Comparing actual hourly generation from a CCGT plant in the Houston load zone to day-ahead prices from the same zone further complicates the question. For 2014, the plant looked like it was making roughly $51/KW-year in net revenue. Taking into account other revenues from ancillary services and possibly transmission congestion pricing, this seems in line with the $57/KW-year figure quoted above for a typical CCGT. For 2015, when natural gas prices dropped by about 39% and the plant’s generation output increased markedly, revenues net of variable costs dropped to $33/KW-year!

Continued gas investments seem to be waiting for coal retirements. The economics of a typical coal plant in the Houston load zone yielded, depending on assumptions, net revenues between $100 and $150 per KW-year (CONE for a new coal plant is around $200/KW-year) in 2014 – bad news for investors but still a feasible proposition with some net revenue.

With low gas prices, however, 2015 became a disaster for the coal plant’s corporate owners. Net revenues in the $25-$60 per KW-year is barely enough to cover fixed O&M, much less finance costly new mandated pollution controls.

One way to interpret the future generation glut in ERCOT’s near term resource forecast is as a giant game of chicken being played between coal and gas. Coal plants are hoping to hang on long enough for natural gas prices to rise, while new gas plant investors anticipate imminent retirements across the coal fleet. Meanwhile, wind and solar (and soon storage) will be eating their lunch assuming technology costs continue to drop or gas prices return to 2014 levels.

The transition described above, and its associated surplus, have had two principal effects. First, wholesale electricity payments have dropped significantly (about $4 billion or roughly 30%) from 2014 to 2015, mostly due to falling average natural gas prices (about a $10/MWh drop in day-ahead prices across the board). Second, reduced price volatility has delivered savings reflecting a more reliable system. New CCGT capacity on top of existing coal and new wind and solar resources has added capacity and flexibility to the supply mix, preventing wholesale price spikes.

Markedly visible tightening of the hourly price distribution in the graph above implies a reduced likelihood of scarcity conditions during those times for 2015. This tightening, unrelated to meeting system peak, also helps explain the significant drop in CCGT net revenues mentioned above.

Why the current overcapacity in ERCOT matters

Savings from lower gas prices and increased renewables in Texas’ wholesale market should eventually benefit all consumers. A forward capacity market focused on recovering CONE for existing power generation companies would have erased much of these savings and prevented consumers from reaping dividends of the coal generation transition to gas and renewables, with several years of system over-capacity and net revenues below CONE.

Fortunately for consumers, Texas regulators have let market participants assume the risk of reading the energy tea leaves. Allowing incumbent generating companies to recover CONE through forward capacity markets during a transition away from coal in other organized wholesale markets may have resulted to a huge give-away to incumbents. Considering Texas’ potential $9 billion of avoided “revenue sufficiency” payments over two years could have outright bought an extra 8-12% of peak capacity in CCGTs, decision makers elsewhere should reconsider using forward capacity markets to balance energy revenues in order to recover CONE.

The laws of economics will eventually rule as Texas’ energy transition develops. Continued low electricity prices will either drive out coal capacity, or planned new generation projects will have to be canceled due to unattractive prospective returns. If statewide electricity consumption continues growing, wholesale prices will have to rise to entice new investment from power generation companies or planning reserve margins will drop again. But if renewable energy and demand-side resources continue their remarkable growth and price declines to provide cheaper grid services and flexibility, the CONE for CCGTs may become the wrong metric for evaluating a sustainable wholesale electricity market.

Decision makers for wholesale markets must ask if tying the fulfillment of reliability needs for a couple hundred random hours in the year to the ability of generating companies to collect sufficient revenues running most of the year makes sense. Gathering the necessary flexible resources through ancillary markets or capabilities markets and leaving the rest of the generation fleet to focus on energy provision at least cost, through attrition of the least efficient units, makes economic sense.

Flexibility and capacity can come from myriad sources. Well-designed markets and technology agnosticism on how best to maintain reliability can ensure wholesale electricity markets like ERCOT keep on saving.

Thanks to Eleanor Stein, Marilu Hastings, Nelson Nease, Mike Hogan and Bob King for their input on this piece.

Subscribe to our America’s Power Plan email newsletter to have the latest Trending Topics from Energy Innovation delivered to your inbox.
« Five Ways to a Flexible Grid Trending Topics – Poll shows widespread support for clean energy »