**This article was originally published in Chinese by The Paper on March 7, 2016.**

China’s State Council recently issued a policy directive to strengthen urban planning and development. This directive’s proposal to halt construction of gated communities has caused an uproar. In response to the public backlash, MOHURD explained, “Gated communities will be opened gradually, this should not be interpreted as ‘tearing down walls,’ ‘one-size fits all,’ or ‘rash action.’” Neighborhoods comprising small blocks will be important to promoting the diversity and organic nature of China’s cities in the future. Chengdu’s Yulin was developed spontaneously as a neighborhood made up of small blocks. Some of the blocks are gated while some of them are open neighborhoods. The neighborhood hosts a variety of businesses, services, and community activities. It is a successful example of using small blocks to create economic vibrancy in a Chinese neighborhood.

1. A diverse and organic neighborhood When Yulin first started developing in the 1980s, financial constraints led most developers to only develop small plots of land. In the following decades, a network of small streets and a mix of old and new housing transformed into today’s Yulin neighborhood. Compared to today’s monotonous gated communities built on superblocks, Yulin is complex and diverse.

The image on the left shows a large-scale gated community in Guangdong and its surrounding villages. In contrast, on the right, the Yulin layout is composed of smaller blocks and accessible neighborhoods

2. Economically successful businesses and services Today’s monotonous, large-scale, gated communities have undergone gentrification. As a result, small businesses and vendors with low profit margins have difficulty paying the base rent for storefront space in gated communities. In Yulin, on the other hand, the diverse space provides a home for both mature commercial businesses and small businesses. The space allows a diverse and interesting group of businesses to thrive. This mix of businesses gives Yulin a vibrant atmosphere. Along Yulin’s roads, old buildings, and other nooks and crannies, many different kinds of goods and services are available. Yulin’s number 1006 bus route has been called the “gourmet bus” by Chengdu’s gourmands because it connects all the restaurants serving local fare in the neighborhood.

3. A vibrant environment for arts and culture The diversity cultivated by the small blocks doesn’t just contribute to Yulin’s vibrancy; it also provides a flourishing environment for the arts. Because of the relatively low rent and lively environment, starting in the last century, Yulin has attracted artists, poets, underground rock and folk artists, and architects. People including painters (He Duoling, Zhou Chunya, and Zhang Xiaogang); the architect Liu Jiakun; the sculptor Zhu Cheng, the performance artist Dai Guangyu, and poets (Zhai Yongming, Tang Danhong, and Zhong Ming); and underground musicians (Yu Zhiyong and Sheng Xiaotong) have all become part of the community. They rent older living quarters in the neighborhood to use as work studios. The neighborhood’s bars, cafés, and teahouses all serve as meeting points for artists. It wouldn’t be an exaggeration to say that Yulin is the birthplace of Chengdu’s modern art scene.

From left to right: 1) Yulin’s Water Village Cafe hosts the sixth session of a lecture series on architecture; 2) The band, A Xiu Luo, performs inside a pub.

4. Lively Public Spaces Yulin’s public green space occupies a relatively smaller area. But unlike the giant plazas and green spaces of gated communities, Yulin’s small plazas and green spaces are distributed in an “acupuncture” pattern in a way that is accessible and suits the human scale. As a result, these spaces are regularly used. This distribution of public space and amenities has created a lively social scene in the neighborhood.

5. An organic mixing of social classes Cities should allow people from different income levels to interact. Isolated gated communities can create slums, amongst other problems. In contrast, the community atmosphere of Yulin doesn’t come from it being gated; rather, it stems from the close network of students, white collar workers, artists, and low-wage workers in the neighborhood. It allows neighbors to feel familiar with each other. This is the greatest lesson that Yulin offers today’s gated communities.

Lessons from Yulin on privacy, property rights, and public amenities

1. Should a city’s roads cut through neighborhoods? – An arterial network 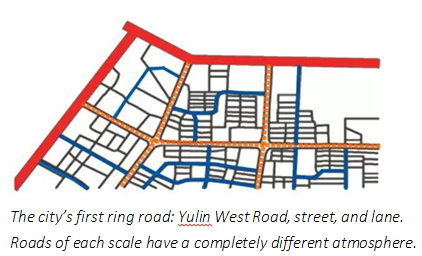 Putting aside the question of whether a neighborhood should be “open” or “gated,” we should turn to the question of whether a place should be single-use or mixed-use. Yulin’s small street network can be analogized to blood vessels; not only are there roads like Yulin West which serve as major arteries, there are also countless “winding paths” that are like capillaries. These roads maintain the connection to the city and also preserve the neighborhood’s local character and privacy. With this dense network of roads, every scale of road offers a different atmosphere.

2. How do you preserve the privacy and safety of a neighborhood? – Small blocks and access control systems Altogether, Yulin encompasses a few dozen blocks. Every block has 2-15 buildings, each having its own enclosure with an access control system. Because every block contains relatively few people, the guards can easily distinguish between residents and non-residents.

From left to right: 1) Yulin’s public recreation space; 2) Amenities such as a “popular science park” for children and a free barber shop for the elderly; 3) A small plaza in the neighborhood.

Re-creating a sense of community

Due to the loss of a sense of community in many neighborhoods in China, public participation in city planning is more important than ever. Beyond Yulin, there are many other local case studies that can provide valuable lessons. For example, during the restoration of Shicaojia Lane in Chengdu, a self-initiated resident’s restoration committee was formed, furthering the power of the people. Engagement and collaboration with the local government and planners prevented misunderstandings. Wenling in Zhenjiang province popularized “participatory planning,” which allows residents to directly participate in the planning of public amenities. Neighborhoods based on a “small blocks” model can bridge different groups in society, making Chinese cities more beautiful and diverse.

++++
Yu Yajie completed his bachelor’s in Architecture at Sichuan University. Currently, he is studying urban planning in Germany.

Enter your email address to have updates from Energy Innovation delivered to your inbox.
« Why China’s new urbanization guidelines are a major milestone for urban sustainability Trending Topics – How to manage large-scale change on the electricity system »
We use cookies to provide social media features, analyze our traffic, assist you with contacting us, and help improve your user experience on our website. By clicking “OK” you consent to the use of these types of cookies. However, some system cookies that are needed for this website to work properly have already been set. Learn more in our Privacy Policy.