The Carbon Budget 2013 reports that annual emissions have been steadily increasing, though the major contributors to such emissions have changed within the last several years. In 2005, developing countries surpassed developed countries as the greater contributors to climate change. This is due to emission levels falling in developed countries like the European Union and the United States, but skyrocketing in developing countries like China and India. Annual CO2 emissions from developing nations, which accounted for approximately one-third of global emissions in 1990, now account for nearly 60 percent of global emissions. 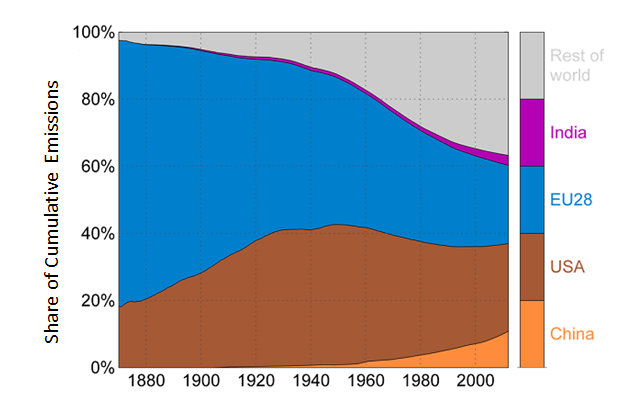 The question of who is most responsible for climate change is a contentious topic. As discussed above, developed countries have been emitting more emissions for longer, though it is now evident that these countries are reducing their emissions while developing countries emit more each year. Previously, targets for emissions reductions have only been aimed at the developed world, to the displeasure of many of these countries that have now curbed their own emissions. Indeed, one of the major debates at the recent Warsaw Climate Change Conference was whether the next global climate treaty (to take place in 2015 in Paris) should require developing countries to commit to emissions reductions requirements. Other highly-disputed issues at the Warsaw Conference included the implementation of the ‘loss and damage’ mechanism to give additional aid to developing countries to help cope with climate-related disasters, and the continuation of the Green Climate Fund to support policies and programs in developing countries to help avoid climate change impacts. The Carbon Budget 2013 report makes one thing clear: unless all countries make an effective, lasting commitment to reducing emissions, we will exceed our carbon budget.

Enter your email address to have updates from Energy Innovation delivered to your inbox.
« Hal Harvey Describes Fracking’s Impact in Politico Magazine’s Inaugural Issue Technology Change Inevitable, Opportunity Lies in Embracing Change »
We use cookies to provide social media features, analyze our traffic, assist you with contacting us, and help improve your user experience on our website. By clicking “OK” you consent to the use of these types of cookies. However, some system cookies that are needed for this website to work properly have already been set. Learn more in our Privacy Policy.