At the 2013 Aspen Ideas Festival, Hal presented on the impacts of climate change and how policy and technology can minimize or reverse these trends. The produced video of Hal’s presentation, “Fear and Hope: Climate Change and Policy Solutions,” can be viewed below. Or click here to view the raw footage of Hal’s presentation at the Aspen Ideas Festival.

Hal’s op-ed piece on “Fear and Hope” was originally featured on the LiveScience website, and can be found here.

I am often asked whether or not there is hope for winning the race against climate change. It’s a difficult question, especially if one keeps up with climate science—which is ever-more worrying. The threats to our ecosystems and natural habitats, and indeed to agriculture and civilization, are fierce, and growing. It is a sobering exercise to track our climate trajectory.

There are three elements that are especially frightening. The first has to do with the way climate change manifests itself. Climate modelers always talk about “global average temperature rise,” because that’s the scientific norm used to keep track of climate change. But it turns out that it is weather extremes that matter. It’s the 100 year drought coming every ten years; the floods that, at times, cover more than half of countries like Thailand or Bangladesh; the threat to over a billion people from rising oceans; the anticipated decline in food crop yields in Africa. These are non-linear phenomena, and a quick study of how average temperature changes shows that the extremes go crazy. Indeed, the extremes become the norm.

The chart below, of July average temperatures in the US, shows the old norm with the green line, and the new norm in blue, grey, and red. Note that the quantity of extremely hot days has increased many times over. 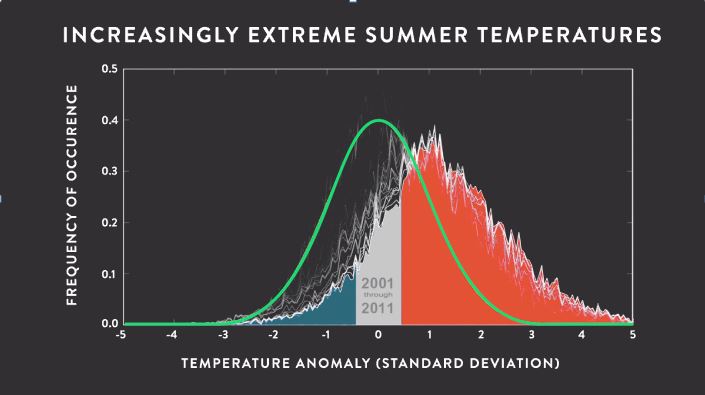 The second element is that manmade climate change unleashes new natural system reactions, which accelerate the whole business. One fearsome example is all the frozen methane embedded in tundra in the northern climes – in Canada, Alaska, and Russia. As the tundra thaws (and the Arctic is warming three times faster than the rest of the world), it will release vast amounts of methane, which is itself an extremely potent greenhouse gas. Thus, humanity’s actions trigger natural systems that confound and redouble the damage.

Finally, carbon mathematics have an unyielding character, in that emissions today persist as concentrations for hundreds, even thousands, of years. As the graphic below shows, it’s actually harder, under most plausible pathways, to stabilize concentrations at 650 ppm (an extremely dangerous number) than at 450 ppm. The reason: Carbon is cumulative in the atmosphere, and to stabilize concentrations at any number means that annual emissions must go to near zero. And it is easier to get to zero from a relatively low number than from a higher number. This is simple math. 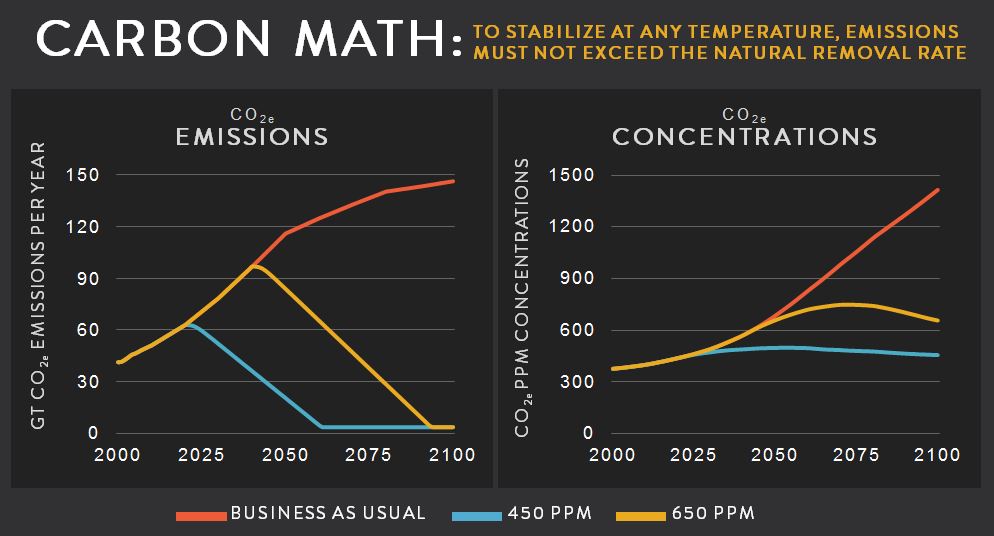 What about natural gas: Can it save the day? I would argue that natural gas can be a bridge fuel, but only if it is developed with very low levels of leakage. If natural gas leaks at even a three percent rate, it is as bad for the climate as coal. The other condition for natural gas is that it should not be used to displace renewable energy or efficiency: If gas displaces zero carbon energy resources, it is obviously bad for the environment. Thus, to make natural gas beneficial for climate change, it needs both environmental regulation to sharply limit methane leaks, and utility rules that ensure it displaces coal, not clean power options.

Against all of that, where’s the hope? Well, to beat a runaway threat, you need a runaway force for good. Fortunately, there is a spectacular boom in both efficiency technologies and renewable energy technologies. Solar prices have dropped by 80 percent in the last decade, and wind by half. Several nations have installed vast amounts of renewable energy in just a few years, and now get a quarter or more of their electricity from clean sources. At the same time, energy demand has peaked and is declining in many countries. 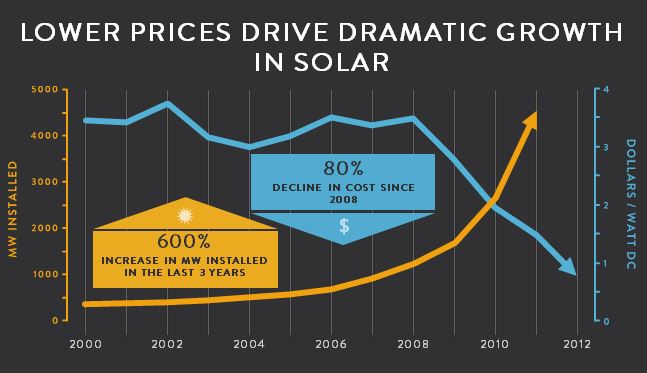 If we accelerate these trends in clean energy and energy efficiency, it is possible to land at a reasonable climate future. But, as the carbon math I described shows, a delay of even a decade or two can preclude a reasonable future.

This leaves us with three big challenges. First, manage fossil fuels. There’s no question we need to phase out coal, and similarly no question that we have to use natural gas much more intelligently than we have so far. Second, we need to dramatically expand energy efficiency. Most advanced European nations produce twice as much goods per unit of energy as does the US, and the US is in turn twice as good as China. The less energy we waste, the more of a chance we have of landing at a reasonable climate future. Indeed, every single serious study of the energy future argues that we need to aggressively promote energy efficiency.

Finally, we need to make sure that these new low cost renewable energy sources, like solar and wind, are deployed widely and rapidly. At the end of the day, that requires rethinking the way the electric utility system is structured, and then rewriting the rules governing utilities. These huge industries need to become agents for the good.

So, as I think about climate change and policy solutions, I’m still an optimist. I think we can win this one, or at least land at a reasonable future. But if we waste time, we foreclose reasonable options. So it’s time to pick up the pace on clean energy—and that requires good policy.