On June 6th, Energy Innovation released the report “Frack or Fiction”, which offers recommendations to the California Department of Oil, Gas, and Geothermal Resources (DOGGR). Last December, DOGGR released a Pre-Rulemaking Discussion Draft Regulation to start the process of oversight of fracking in the state. “Frack or Fiction” includes specific recommended changes to the regulation, as well an overview of technological, environmental, and policy issues.

There is great interest in the oil trapped in California’s Monterey shale formation, estimated to represent 64% of recoverable U.S. Shale Oil. However, new advances in hydraulic fracturing and other emerging techniques have yet to unlock the Monterey shale’s oil in any meaningful quantity. California’s oil production did increase in 2012 for the first time since 1997, but only slightly. The faulted and folded geology in California makes it more challenging for engineers to extract oil from the Monterey shale, but they are working hard at it. If oil prices remain high, there is every reason to expect they will eventually figure out a cost effective extraction method, whether by hydraulic fracturing or one of the other emerging techniques. 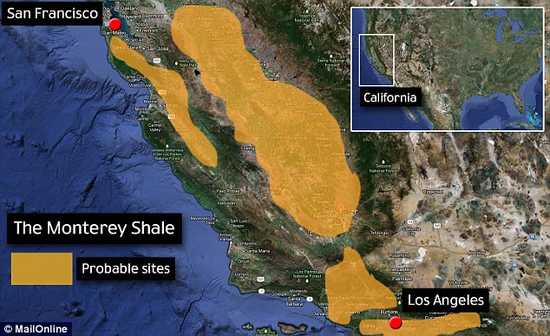 That’s why it is so important to get the right policy in place. DOGGR’s draft regulation needs significant strengthening, that was the message delivered by the public in meetings DOGGR conducted around the state in the first half of this year. Energy Innovation: Policy and Technology LLC Research Director Chris Busch presented oral testimony at the Sacramento and Monterey meetings.

There are positive signs that the proposed regulation expected to be released later this year will be stronger than the current draft regulation. For example, though not included initially, we expect that it will require baseline groundwater testing so that contamination that might be caused by fracking can be documented.

We have found great receptiveness to our argument that open pit storage should be prohibited in a state prone to flooding like California. The epic rains of 1861-1862 created a lake 300 miles long and 20 miles wide in the Central Valley, and required moving the state capital to San Francisco for 18 months. What’s worse, the chance of catastrophic rain events is increasing with climate change. If tank storage is not required, the regulation should require operators to prove that the site for a proposed pit is not subject to flooding, and set other performance standards for pits.

The DOGGR regulation does not focus on greenhouse gas emissions related to oil and gas production in California, except in well construction standards, which is just one area of concern. Energy Innovation is ramping up work on that issue, and on methane leakage in particular. In May, Chris met with the CEO of Picarro, Inc., a California startup that has developed a new, faster, more accurate technology to measure methane emissions. We are working to see that such cutting edge technologies are being used to push methane leaks toward zero and to properly account for methane emissions in the state’s inventory. Recent work in the Los Angeles air basin with Picarro’s tool suggests that emissions may actually be higher than the state’s inventory would indicate. In 2014, the California Air Resources Board will launch a proceeding to set greenhouse gas performance standards for the oil and gas production industry.

Enter your email address to have updates from Energy Innovation delivered to your inbox.
« Wind is Now Cheaper than Coal in Montana NASA Investigates the Threat of Climate Change in the Arctic »
We use cookies to provide social media features, analyze our traffic, assist you with contacting us, and help improve your user experience on our website. By clicking “OK” you consent to the use of these types of cookies. However, some system cookies that are needed for this website to work properly have already been set. Learn more in our Privacy Policy.