The International Energy Agency (IEA) has released a report on renewable energy market trends and projections in the medium-term (from now through 2017). The report offers detailed analysis of 12 OECD countries plus China, India, and Brazil, which, combined, generate approximately 80% of the world’s renewable electricity. This is IEA’s first medium-term report (making projections through 2017) that is focused on renewable energy.

Renewable energy has been the fastest growing source of energy over the last several years and now accounts for nearly one-fifth of the world’s electricity production. IEA predicts that this market will continue to grow in the future; power generation from renewable energy sources are projected to increase more than 40% over the next five years. While hydropower will remain the largest renewable energy source, non-hydro renewable sources are expected to grow at double-digit rates each year. Although different regions will add varying amounts of renewable energy based on their climatic conditions, the majority of growth will come from emerging markets in non-OECD countries. 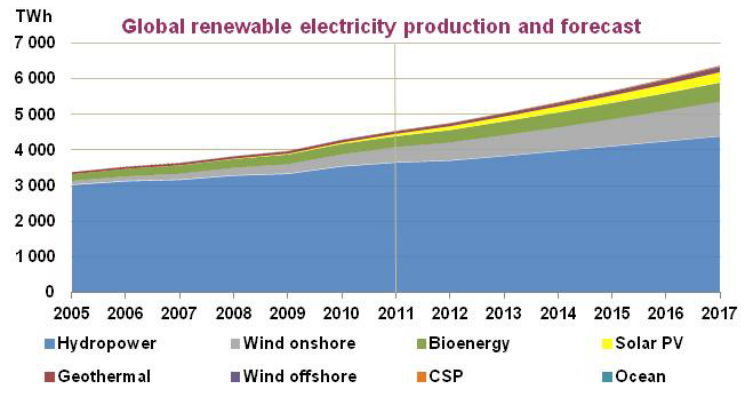 Despite these optimistic projections, there are several variables to be considered if the global renewable energy market is to continue expanding. One key variable is the issue of integrating renewables into the electricity grid. Another determining factor is the availability of financing for the continued development and deployment of renewable energy technologies. Government incentives and regulations will also play a crucial part in determining the role of renewable energy in the future.

IEA has also published a presentation highlighting key points from its report. A copy of the presentation can be found here.