Earlier this month Advanced Energy Economy Institute (AEEI) released a report that analyzes the advanced energy market, its impact on national and global economies, and key trends within its market segments. AEEI commissioned Pike Research to perform this analysis and drew information from 60 previous Pike studies to assess the behavior and impact of advanced energy markets.

The report finds that advanced energy generated more than $1.1 trillion in global revenues in 2011. Almost half of global revenues from advanced energy came from electricity generation, which was led by hydropower, solar, and wind. AEEI’s report predicts that revenues will decline slightly to $1.04 trillion in 2012, caused mainly by a decreased demand for hydropower in China. Transportation was the second largest sector in the global advanced energy market, due to the increased manufacturing and sales of clean diesel, hybrid, plug-in electric, natural gas, and fuel cell vehicles. Transportation is predicted to be the largest global market segment in 2012.

The United States accounted for 12% of the global revenue in the advanced energy market and is predicted to account for 15% of the market in 2012. The U.S. generated $132 billion in revenues from advanced energy ($97 billion of which came from domestic content), which led to a $145 billion increase in GDP. The advanced energy market also contributed over $20 billion in total tax revenue ($14 billion from federal tax, $6.7 billion from state and local tax). The largest U.S. market segments in 2011 were fuel production (due to sales in ethanol) and buildings (due to sales in HVAC and lighting services). 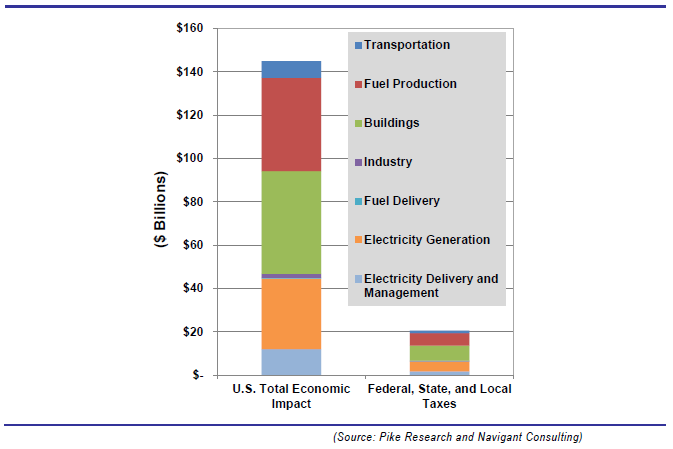 This report articulates the importance of advanced energy in the national and global economy through quantifiable measurements. This is a dynamic market that is constantly evolving as new, innovative technologies and services develop over time. In addition to its economic impact, advanced energy has been paramount in increasing energy security and reducing health and environmental costs.