Energy Innovation has recently released a report about extreme temperatures and their weather-related impacts. The report, “Extremes Become the Norm,” was originally published in 2009, but has been updated with current information about global temperatures and major weather events, as this information has changed drastically within the last few years.

The increased frequency of extreme temperatures results in the increased frequency of extreme weather events. For example, 2010 is considered both the hottest and wettest year on record. This means that while some parts of the world (Russia, Australia) were being stifled by record temperatures that led to drought and crop loss, other areas (China, Thailand) were inundated with fierce precipitation that led to mud slides and flooding. Damages from these weather events include direct costs in the billions of dollars, as well as lost productivity and time for impacted economies to fully recover. 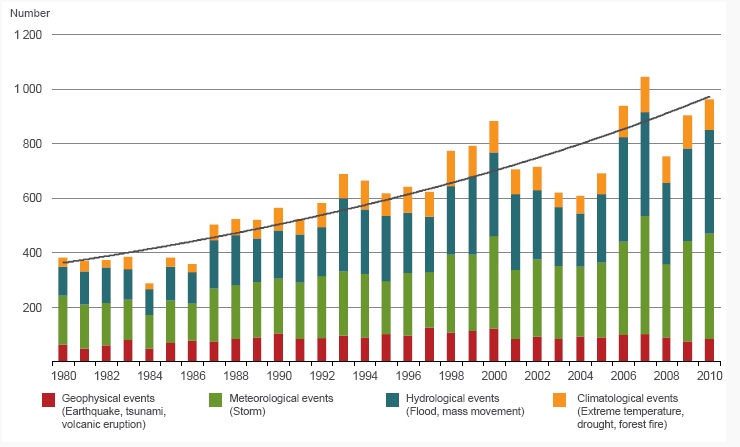 While temperature fluctuations and weather catastrophes occur naturally within the environment, the report concludes that humans have increased their impact on the natural systems since the Industrial Revolution. Increased coal combustion and deforestation have led to an imbalance in the carbon system in which carbon sources increase while carbon sinks decrease. This causes more carbon dioxide to remain in the atmosphere, thus altering the world’s climate. However, in the same way that humans are accelerating climate change, we have the potential to provide solutions as well. Reducing carbon emissions by employing more efficient and less carbon-intensive technologies can help bring the carbon cycle back toward equilibrium. Such efforts must begin now in order to help prevent more frequent and intense weather extremes around the world.