Businessweek recently published an article discussing the causes and consequences of Hurricane Sandy, and how to better prepare for future natural disasters. “It’s Global Warming, Stupid” includes analysis from a range of prominent figures in the energy and policy realms, including Eric Pooley (senior VP of Environmental Defense Fund), David Rothkopf (chief executive and editor-at-large for Foreign Policy), and Andrew Cuomo (governor of New York).

The article provides an explanation of climate change’s contribution to severe weather-related disasters. Jonathan Foley, director of the Institute on the Environment at University of Minnesota, notes that events like Hurricane Sandy would have occurred without climate change, however shifts in atmospheric and oceanic composition (which are linked to climate change) enhance these weather events to make them stronger and, therefore, more catastrophic. For example, as oceans warm, they expand and rise to create higher and stronger swells during a hurricane, which recently caused major damage to the New Jersey coast. The melting of Arctic ice, also linked to climate change, contributes to the formation of cold fronts, which caused large amounts of snowfall and rerouted Hurricane Sandy back eastward toward major metropolises.

The Businessweek article includes a timeline that charts natural disasters (the type of weather event and cost in economic losses) from 1980 until 2011. Data from the timeline reveals that, since 1980, weather-related disasters have nearly quintupled in frequency and cost more than $1 trillion in economic losses. Of the weather-related disasters included in the timeline, hurricanes have occurred most often and incurred the largest economic costs. However, global warming will increase frequency and severity of other weather activity as well, such as heat waves, droughts, and storms. 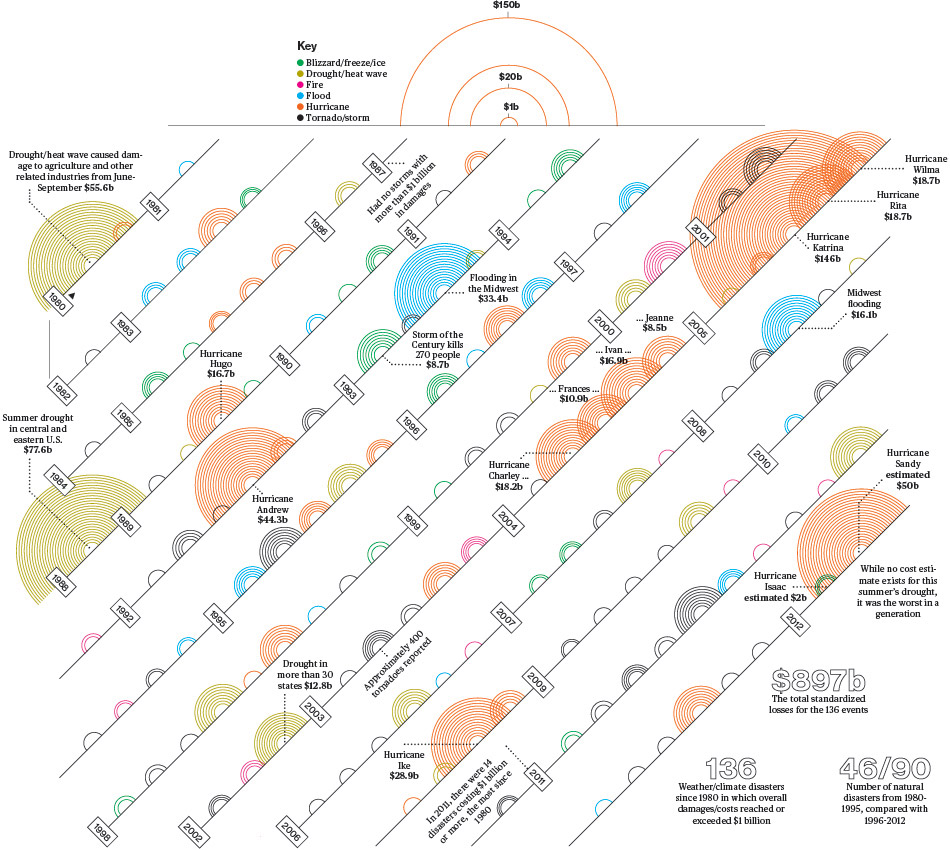 This superstorm ought to be a wake-up call for policy-makers to increase their attention toward climate change and its disastrous consequences. The authors suggest increasing the use of natural gas to replace coal and oil while scientists continue to develop breakthrough energy technologies to reduce carbon emissions that contribute to climate change. The magazine also argues it will be necessary to make carbon pricing a part of the national debate.

Hurricane Sandy demonstrates the importance of increasing attention to disaster preparedness and response. Improving infrastructure like burying power lines and designing surge protectors and waterproof subway systems will require upfront costs, but help avoid massive damage during the next large hurricane. Businessweek concludes that, “what’s lacking in America’s approach to climate change is not the resources to act but the political will to do so.” Increasing awareness of the issues and scientific data will be an important part of enacting effective legislation.

Hurricane Sandy made landfall Monday, Oct 29th and severely affected the mid-Atlantic and New England regions of the United States. Eight million households lost power and hundreds of thousands of people were evacuated from their homes. It is estimated that damage and recovery from the hurricane will cost approximately $50 billion.

« Op-Ed by Neil Lane and U.S. Support for R&D John Doerr on Research, Immigration, and Education »