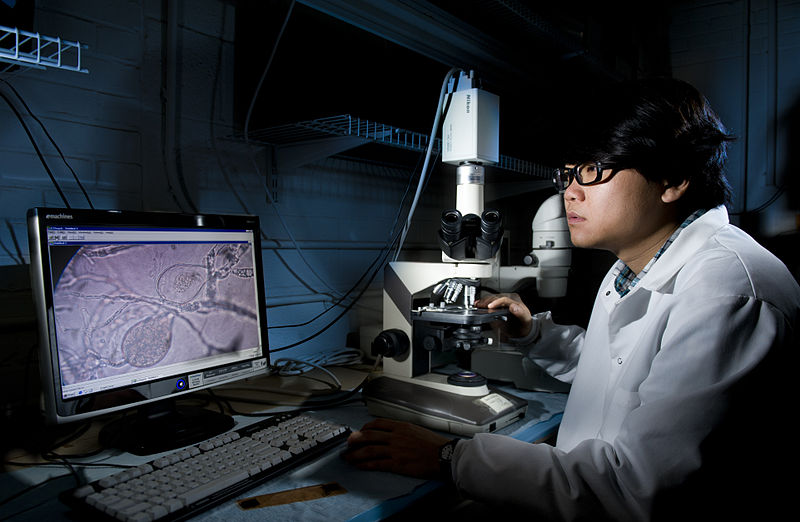 Neal F. Lane, the former director of the National Science Foundation and chief Science and Technology Advisor to President Bill Clinton, has written a sharp op-ed in the New York Times about government funding of scientific research.  He makes two critical points:

Lane claims that “a main reason” for the strong economic growth and the achievement of a balanced budget under President Clinton was Federal support for scientific research, enabled by a bipartisan consensus that investments in science are good for our nation.  He brings up several examples: $26.6 billion in NIH funding led to $69 billion in economic activity and 485,000 jobs, and $3.8 billion in funding for the Human Genome Project helped create industries that now are responsible for $796 billion in economic activity.

Lane is deeply concerned about increasing politicization of Federal support for scientific research in recent years.  He warns that a Republican spending plan endorsed by presidential nominee Mitt Romney could cut nondefense research by 25% and energy research by 67% over the next decade.  Under Obama, congress has not appropriated funds for research at a sufficient rate, and Lane worries about the damage that would be caused by sequestration ($1.2 trillion in budget cuts that will take effect, barring legislative action, as part of last year’s deal to raise the debt ceiling).  The Office of Management and Budget has calculated that sequestration would result in an 8.2% cut to federal funding of science programs.

Lane is right to be concerned about the politicization that is hampering efforts to boost Federal R&D spending, but his focus on the current political cycle obscures the fact that this is an acceleration of a long-term trend.  The graph below shows federal funding for R&D activities in as a percentage of total federal outlays.  Data come from Table 9.7 in the OMB Historical Tables. 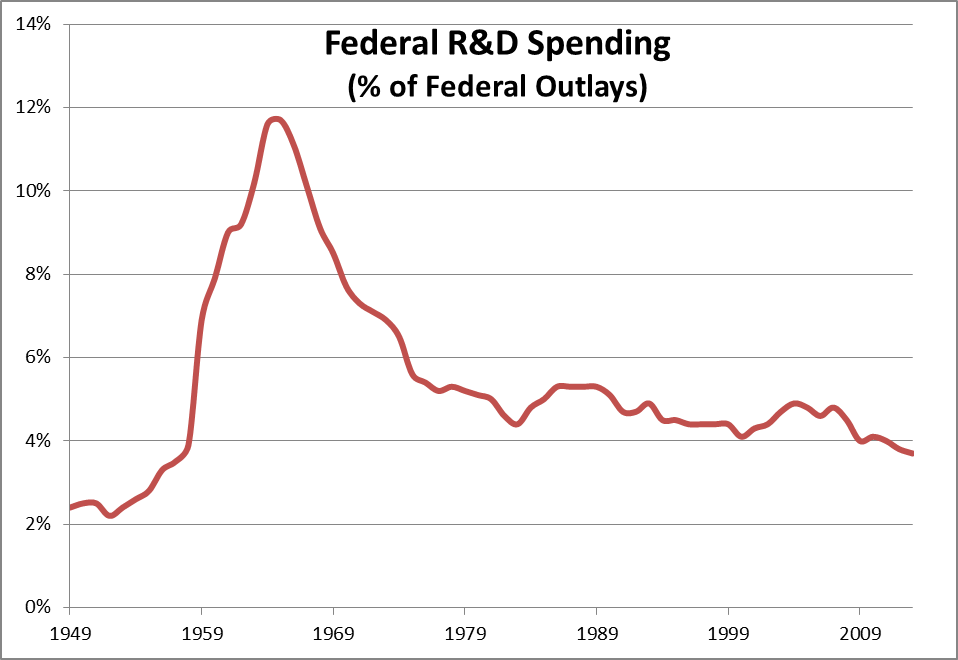 The percentage of Federal spending directed toward R&D reached a high in the 1960s, helping the U.S. to attain technological leadership during the early Cold War and cementing the country’s place as an economic superpower.  Since 1981, R&D as a fraction of the federal budget has been slowly declining, a trend that became more pronounced following the 2009 financial crisis and ensuing congressional deadlock.

In the last two decades, developing countries have gained considerable research capacity while U.S. federal commitment to R&D has weakened, and the private sector is already responding to these signals.  A Nov 2010 survey of 1,050 North American companies by Ernst and Young found that 11% spend at least a quarter of their R&D money in emerging markets, but by Nov 2015, that figure will be over 23%.

Lane is right to point out the critical linkage between R&D and economic prosperity, and to highlight the fact that further cuts to federal support for R&D would be deeply harmful to the country.  However, the solution goes beyond simply preventing cuts in next year’s budget or the sequestration.  Maintaining U.S. technological and economic leadership in the 21st century will require a constellation of federal policies designed to bolster both private- and public-sector research, including measures such as:

Many of the obstacles and opportunities for R&D at private-sector companies are examined in an upcoming report I’ve written for the American Energy Innovation Council.  If you are interested in these issues, keep an eye on their website- it should be released in November or December of this year.