In September 2012, the U.S. Department of Transportation’s Federal Highway Administration (FHA) published a report analyzing the success of existing bike sharing programs in the United States and details considerations and recommendations for future programs. The guide, titled “Bike Sharing in the United States: State of the Practice and Guide to Implementation” was prepared by Toole Design group (a planning and design firm for multi-modal transportation) and the Pedestrian and Bicycle Information Center in cooperation with the FHA. The release of this guide demonstrates the government’s increasing recognition and support alternative forms of transportation that promote safe and healthy communities.

The guide defines bike sharing as “a non-motorized transportation service, typically structured to provide users point-to-point transportation for short distance trips (.5 to 3 miles).” These programs establish bike stations throughout a region where users can rent and return their bike at their convenience. Unlike traditional bicycle rental services, bike sharing is oriented to short-term, one-way use and requires little to no staff or security due to the simple automated rental system employed by bike companies. Presently, there are 20 established bike sharing programs throughout the U.S. and 20 more are currently in development.

Nine of the United States’ most successful bike sharing programs were analyzed to provide examples of how programs can be organized and structured. The guide also listed several considerations and recommendations regarding planning and implementation, including station location, compatibility with other local transit, affordability, community availability, theft, and safety. So far, bike sharing programs have proven to be popular in the United States, with the 9 programs selected for this guide reporting nearly 34,000 annual members and approximately 560,000 casual (monthly, weekly, etc) users. Some of the larger bike sharing programs in the U.S. average several thousand rides each day during warm weather seasons. 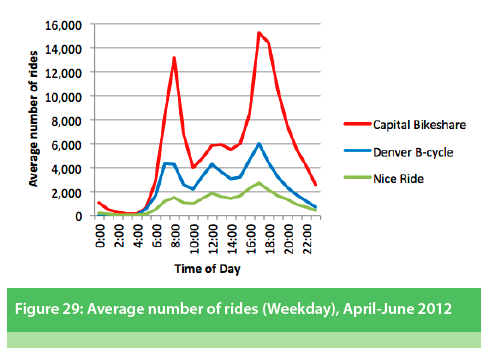 Bike sharing programs offer a host of benefits to urban communities. From a planning and design perspective, they “contribute to reduced traffic congestion, reduced use of fossil fuels, reduced pressures on motor vehicle parking supply and increased use of transit and other single occupant vehicle alternatives.” Programs typically have high returns on investment, as they have relatively low implementation and operational costs, and can be installed in a matter of months rather than years. Bike sharing programs also have fewer reported accidents and injuries than personal bicycle users. This may be partially because program bicycles are slower and heavier than regular bikes, and are also equipped with lights to improve their visibility on the road.

Government support for alternative transportation, such as bike sharing programs, is an important way to improve quality of life as urbanization becomes a more consistent trend for communities. The FHA’s sponsorship for this guide demonstrates widespread federal interest in supporting sustainable transportation programs, which powerfully effect the actions and behaviors of local governments and the public. The development of this guide represents an enormous step in the right direction for federal government and its support of alternative transportation for development of sustainable urban communities.

Enter your email address to have updates from Energy Innovation delivered to your inbox.
« 2012 Carbon Disclosure Project Report Indicates Reduced Corporate Carbon Emissions New Emissions Laws Encourage Sustainable Development in California Communities »
We use cookies to provide social media features, analyze our traffic, assist you with contacting us, and help improve your user experience on our website. By clicking “OK” you consent to the use of these types of cookies. However, some system cookies that are needed for this website to work properly have already been set. Learn more in our Privacy Policy.