In late June, Hal participated in the Equilibrium Capital Forum, which brought together business professionals to discuss potential investment opportunities in the green building, renewable energy, and food industries. Hal’s presentation, titled “Hope and Fear,”  discussed climate change issues and business innovations that will be important in addressing these challenges. A video of Hal’s presentation can be found on the Equilibrium Capital Forum webpage. His take-away message was that businesses have great potential to capitalize on clean energy technology as it becomes a more viable alternative to fossil fuels. However, to leverage this opportunity requires perseverance, and the initial steps necessary for clean energy innovation must happen soon.

Hal half-jokingly remarked that he would begin his presentation by instilling fear into the audience.  He displayed a graph of atmospheric carbon dioxide levels, demonstrating that the sooner we act to minimize emissions, the easier and faster it will be to achieve a target concentration, such as 450 ppm (the concentration corresponding to a likely increase of 2°C over pre-industrial levels). To have any chance of keeping CO2 concentrations below 450 ppm, we must start making drastic changes within the next few years.  Even if emissions levels flatten out by 2020, we only delay the time it takes to reach dangerous CO2 concentrations by about 10 years. Stabilizing emissions is not sufficient; they must decrease to near-zero levels to prevent the continuing accumulation of carbon dioxide. 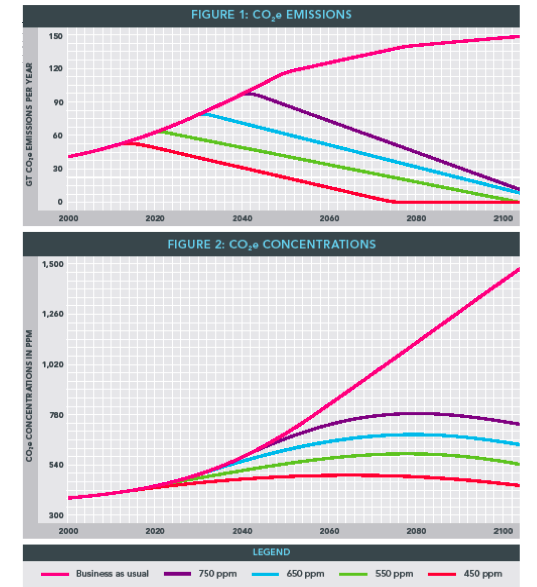 Next, Hal discussed how carbon dioxide emissions have created ‘runaway’ or non-linear feedback cycles that threaten to make climate change spiral out of control. For instance, as the atmosphere warms, ice at the poles begins to melt. Ice is light-colored and tends to reflect light into space, while water is dark-colored and tends to absorb light. As more ice turns to water, less sunlight is reflected back into the atmosphere and more is absorbed by the water, warming the water and further melting the remaining ice. At the same time, as the ice melts, it releases methane that has been trapped within it, adding more greenhouse gases to the atmosphere.

All these contributions to climate change directly impact life on Earth. Weather patterns will intensify with climate change: dry areas will become drier and suffer droughts and wildfires while wet areas will become wetter and more prone to floods. Changing weather patterns affect agriculture across the world, especially in third world countries where malnourishment is already an issue. As a result, people may be forced to leave their native lands. These migrating populations can be called ‘climate refugees,’ those seeking refuge not due to political violence or religious turmoil, but because their physical environments are no longer safe for them. Increasing prevalence of disease will be another consequence of climate change, especially in regions close to the tropics. Hal also pointed out that humans won’t be the only victims: studies predict that up to 15% of all plant and animal species will become extinct by the end of this century due to climate change.

Having discussed the negative consequences of runaway feedback loops, Hal noted that the concept of non-linear change also exists in other domains.  Sometimes it can be beneficial, such as by accelerating the performance improvements and uptake of emerging technologies that help the planet. The alternative energy sector has demonstrated non-linear growth in production scale and decreasing costs. For example, solar and wind energy prices have dropped 75% in the last four years, 45% in the last year alone. At the same time, solar installs have doubled in the last two years and are projected to quadruple in the next four years. Hal also pointed out that renewable energy systems can be integrated into an economy with no financial drawbacks. Germany currently provides the best model of combining energy policy reform with economic success.  Germany’s ecological tax reforms came into play just before 2000. Since then, the country’s fuel consumption has decreased while GDP has continued to climb. 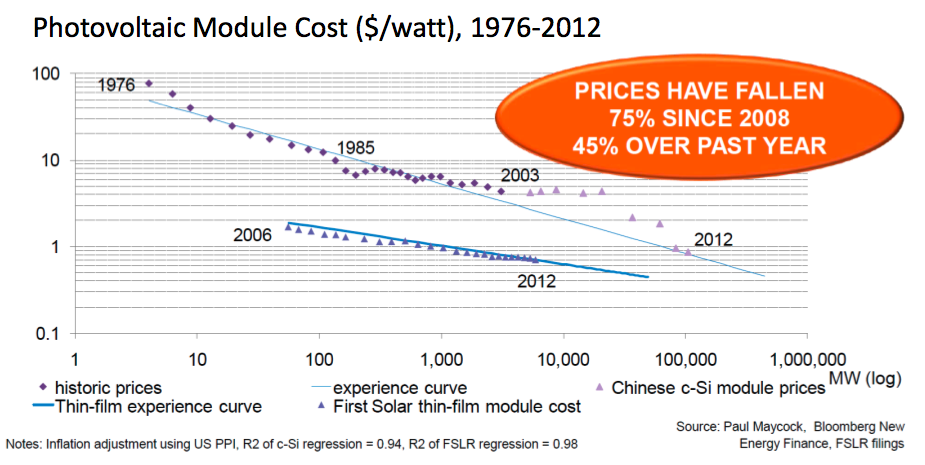 Hal completed his presentation by addressing the importance of these trends to industry and business. There is tremendous demand for energy ($11 trillion is spent on energy and related infrastructure each year), and there is an equally enormous opportunity for companies to become involved in technology investment, research, and production. Energy demand will continue to grow in the next several years, providing a further incentive for investment. In particular, a booming middle class throughout the world and the increasing scarcity of ‘easily captured’ natural resources contribute to this demand. As a result, there is a growing niche for renewable energy. 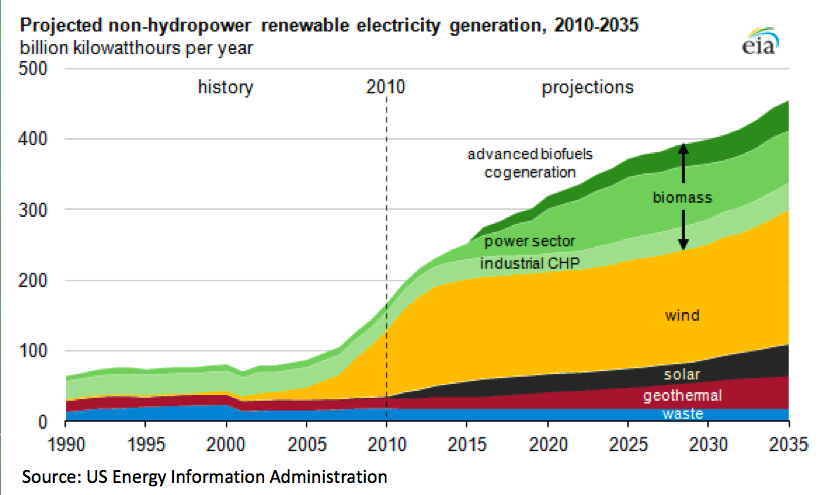 Despite the increasing demand for renewable energy, Hal warned that large-scale renewables still function intermittently and a reliable system must be put in place before renewables can be truly competitive with fossil fuels. Four topics must be addressed to successfully integrate intermittent sources at a large scale. First, we must create a modern electrical grid. Second, new sources of energy must be structured to work together. Third, we must deal with demand dispatch, or ‘load shifting,’ to avoid peak energy use times. Lastly, increasing our ability to store renewable energy makes it a more reliable energy option. Hal calculated that if each of these topics is addressed, the United States could run on up to 80% of renewable energy by 2050.

The four problems for large-scale renewables can also be seen as business opportunities. Last year, the world spent $250 billion on renewable energy. Businesses have the potential to make billions by focusing on the right problems and finding the right solutions. Opportunities exist in energy efficient lighting, lightweight cars, manufacturing and systems optimization, zero energy buildings, and other realms. Each of these industries has undergone tremendous change, and given the non-linear technological development we have seen thus far, there may be still greater potential in the years to come.